Field of dreams dedicated at CBA 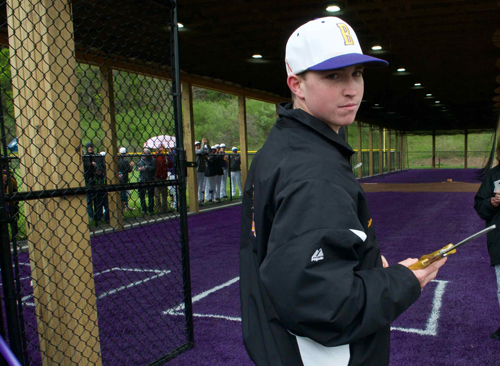 DEWITT — Cold rain (and even momentary snow) couldn’t dampen the spirits of the crowd gathered at Christian Brothers Academy May 15 to see student Jack Sheridan’s wish come true: an improved and expanded baseball field for the Brothers.

Jack, now 17, was diagnosed with leukemia in May of 2014. He persevered through 11 months of weekly chemotherapy treatments before moving into “maintenance” in March of 2015. That means monthly treatments and nightly pills, a regimen he’ll keep up through September of 2017.

Jack’s feeling good these days, he said in an after-school interview with the Sun May 13. Indeed, he’s feeling well enough to be back on the mound, pitching for the Brothers’ varsity baseball team. His first game back was the April 19 season opener, at home against Chittenango. Being back on the field “was awesome,” Jack said, and though the Brothers’ lost, he felt he did well. (He even struck out his first batter that day, and he went on to hit his first home run in the May 12 game versus Mexico.)

Jack’s first game back was played on a field in the midst of extensive improvements, the results of a partnership between CBA and Make-A-Wish Central New York inspired by Jack.

Make-A-Wish, an organization that grants wishes of children diagnosed with life-threatening medical conditions, contacted the Sheridans about a wish in September of 2014, after Jack’s doctor had made contact with the organization, Jack’s mom Kim explained.

“At that time, I guess I didn’t really grasp the fact that it was a life-threatening illness or the fact that he deserved it,” she said. But as the year progressed and she watched Jack go through “horrendous” weeks, “I believed that yes, he did deserve this.”

After taking some time to think it through and to discuss it with the wish granters, Jack wished for renovations to the CBA field.

“The baseball field is something that will be here for a while and I can come back when I’ve graduated, 10 years down the road, and see kids still using it. I think that’ll be cool,” he said.

Make-A-Wish and CBA partnered up, expanding on CBA’s existing plans to renovate the field, explained Patti Callahan, CBA’s Director of Development and Alumni. Thanks to Make-A-Wish, the Brothers now have a brand-new bullpen and batting cages, and through CBA’s work with donors, the field now has a realigned backstop, a refurbished infield, roomy dugouts, and new fencing, according to Callahan.

The completed project was officially unveiled May 15, prior to CBA’s game against Jamesville-DeWitt.

CBA President Brother Joseph Jozwiak, FSC, welcomed the rain-soaked crowd with a prayer, noting that the 15th marked both Pentecost and the day St. John Baptist de La Salle was named the patron saint of Christian teachers. “Truly the Holy Spirit, even though it’s raining, the Holy Spirit is moving among us today,” he said.

Make-A-Wish Central New York President and CEO Diane Kuppermann told the crowd wishes are “about digging deep inside and finding out what that wish might be that’s going to carry a young man and his family and a community through their illness to good health.” Noting the partnership with CBA was “nothing short of extraordinary,” Kuppermann said Jack’s wish to renovate the field is “an incredible thank you to your school, to your community, to your family and everyone who supports you, and more importantly, it will create hope, strength, and joy” for all who use the field.

Jack himself offered heartfelt words of thanks — to CBA teachers, staff, alumni, parents, his classmates and teammates; his sports communities past and present; the Make-A-Wish team; all the donors and supporters; his doctors; his family; his friends; and his coach, Tom Dotterer.

Dotterer gave Jack the nickname Santa, which, Jack said, he explained like this: “Santa goes out in the world and gives hundreds of thousands of gifts to so many people. This is what Jack is doing. He’s not giving material gifts, but spiritual gifts of hope and faith, gifts of courage and strength, inspiration to be better people, not for ourselves but for the people who need us most.”

Since getting that nickname, Jack continued, he’s learned a lot, about Santa, his illness, the many people in his life. “Santa teaches us all how to have belief in something that we can’t see or touch. We need to believe in the things we can’t measure or hold in our hand: love, faith, prayer, hope, and the power of a wish.”

“Coach Dotterer,” Jack went on, “for all that you have given to this school, and for all that you have done for the players who have come before me, and those that will come after me, you Coach, are the real Santa and I’m lucky to be on your team. Thank you, Coach, for helping us all become better ballplayers but, more importantly, for helping us become better people.”

After his remarks, Jack cut the ribbon on the new bullpen and batting cages named in his honor, then threw the first pitch inside.

The ceremony closed with the final part of Jack’s wish: naming the field in honor of Coach Dotterer, who has coached at CBA for more than 30 years and to more than 600 wins.

Dotterer offered his own words of thanks to those gathered, saying he could never repay all that he’s been given.

“I will just say that the spelling on the sign is wrong,” he said. “It should be Y-O-U, Y-O-U, every single one of you. CBA’s a great family.”