‘Forgive us for the sins of racism and indifference’ 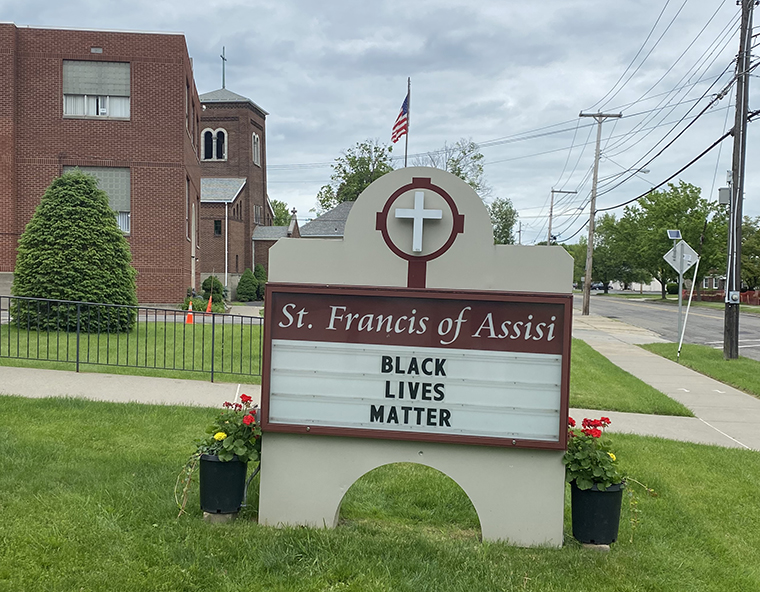 In memory of the time George Floyd lay under the knee of a Minneapolis police officer before dying, Father Tim Taugher knelt for eight minutes and 46 seconds near a downtown Binghamton statue of slain civil rights leader Rev. Martin Luther King Jr.

Father Taugher commemorated Floyd’s life by changing the sign outside St. Francis to read “Black Lives Matter.” A prayer in the parish’s June 14 bulletin focused on Floyd’s killing and the protests across the world calling for an end to police brutality and racial inequality.

“Lord, forgive us for the sins of racism and indifference,” it reads. “Guide us in how to speak and act for justice. Show us how to change systems that hurt and even kill your beloved children.”

Father Taugher also attended the June 14 Prayer and Protest Demonstration at Syracuse City Hall. The event was among several in Central New York that day; demonstrations have occurred in Syracuse daily since May 30. One group, Last Chance for Change, has pledged to protest for 40 days.

Father Taugher is white, as are all diocesan clergy named in this story.

Bishop Douglas J. Lucia, who pledged in his June 4 Catholic Sun column to work with others “in eradicating the sin of racism,” also attended the June 14 demonstration. It was the second Syracuse demonstration spurred by George Floyd’s killing the bishop attended. Father Thomas Ryan, pastor of Fayetteville’s Immaculate Conception Church, a member of ACTS, and several other diocesan clergy also attended.

Father Clifford Auth, pastor of St. Augustine and St. Mary of the Assumption in Baldwinsville, hosted a June 6 video interview with Syracuse activist Clifford Ryans, creator of the nonprofit OG’s Against Violence. Ryans, whose son was killed in a 1999 shooting, has advocated nonviolence on Syracuse’s streets since 2015. He tried to calm the crowd May 30 when a protest escalated near Syracuse’s Public Safety Building and demonstrators broke windows.

“Me being a Black man in America, I’ve been in George Floyd’s position,” he told Father Auth.

“I’ve experienced everything that comes with being a Black man living in America, so I understand, you know, what he was dealing with in that moment,” he said. Floyd’s killing “just reopened old wounds that had been festering for a lot of years from others who had faced that injustice and justice hadn’t been served.”

When he saw the video that showed a police officer pressing his knee to Floyd’s throat until he stopped breathing, “I was angry, hurt, I even shed tears.”

“So many others have faced that; so many others, to include children, have lost their lives,” Ryans said.

Father Auth asked how his parishioners can address injustice and inequality. Ryans responded: “To be proactive in fighting for that cause is the most important thing that you can do and the most important message that you can send…. To the people out there who have that privilege, that white privilege, and… we know that that exists, to be proactive and help and fight for the cause.”

Father Taugher agreed. “People can’t grasp systemic racism or white privilege because we’ve benefited for so long and still benefit from it. It helps us. But certainly it’s a pain of injustice for many.”

Father Taugher said racism and clergy sex abuse are both systemic problems the Catholic Church has been slow to address.

Now, Father Taugher said, “people are raising the alarm about racism. We have to deal with our white privilege if we really want to deal with racism.”

He suggests a diocesan initiative — perhaps during Lent — to discuss and repent for the sin of racism.

The discussions ahead will likely be uncomfortable, he said, but he’s hopeful they lead to transformation.

“It’s to our detriment if we go backward,” he said. “I think it’s the gift of the Spirit to move us.”