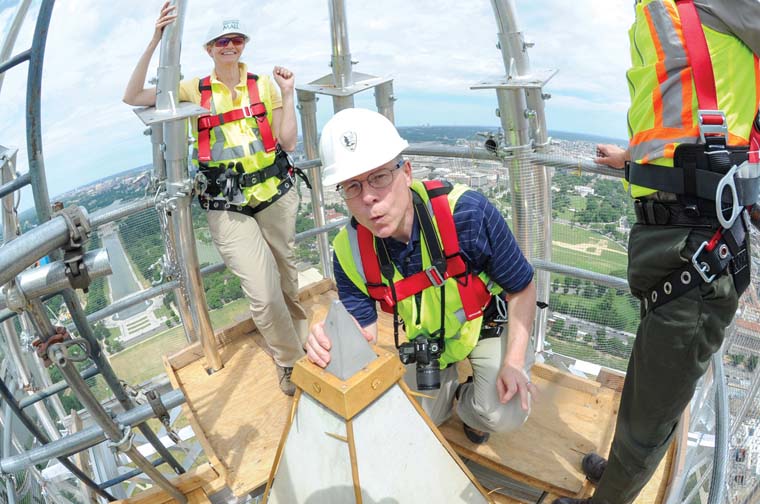 ALEXANDRIA, Va. (CNS) — It started out as a normal July 2001 day in the Office of Management and Budget in Washington.

Chris Ullman, the budget spokesman, was just about to settle into a routine morning meeting with his co-workers when his boss, Mitch Daniels, gave a startling announcement. “The meeting is canceled,” declared Daniels. “Everyone out … except you, Ullman.”

In a split second, Ullman’s bright and sunny morning seemed to be in danger of some extreme unpleasantness.

“I’m fired,” thought Ullman, as everyone left the room. He had been in the business long enough to know that people in the communications industry were just one bad quote away from unemployment. What could he have said?

His fears were for nothing, though. Daniels informed him that instead of whistling in the unemployment line, Ullman would be whistling in the Oval Office for the 43rd president of the United States — George W. Bush.

Chris started whistling when he was 5 years old, according to his dad, Joseph Ullman. But, it was not until the native of New York’s Long Island was 12 that he started developing his gift. His two-hour-long paper route turned into the “consistent and concentrated” whistling time he needed to fine-tune his skills.

Ullman, a parishioner at Blessed Sacrament Church in Alexandria, started practicing the classical pieces he heard at home first. During college, he mixed in some Grateful Dead tunes. He entered his first national whistling competition in 1993. He participated in the national and international competition nine times and won four times.

Ullman was whistling with a band the night he met the love of his life, Kristen, who was wearing a blue velvet dress. Naturally, at their wedding he serenaded her with a whistle version of Bobby Vinton’s No. 1 hit, “Blue Velvet.” His current favorite song to whistle is “Belle” from “Beauty and the Beast,” much to the delight of his daughters.

“I love to whistle because it brings joy to people and lifts up their hearts and makes me happy as well,” Ullman told the Arlington Catholic Herald, newspaper of the Diocese of Arlington.

For the past 30 years, the whistling champ has found himself in more than a few extraordinary situations thanks to his unique talent.

Although it is hard to top the “gig of a lifetime” — whistling the “Battle Hymn of the Republic” in the Oval Office — he also has been called upon to whistle the national anthem at Washington Nationals baseball games and the “Titanic” movie theme song for the president of the Bank of China. He’s performed “Yankee Doodle Dandy” at the top of the Washington Monument — from the outside atop scaffolding. As fantastic as all these moments are, one of his favorite and most frequent tunes to whistle is “Happy Birthday.”

“I’ve whistled ‘Happy Birthday’ more than 400 times per year to friends, family and total strangers,” said Ullman. “I have a special friend named Preston who is a handicapped child who can’t speak but can whistle, and he and I have gotten to be friends. I whistle for him on his birthday.”

He also receives a lot of requests to whistle for senior citizens. Many times, he will be the only person they talk to that day.
“It has really turned into a bit of a ministry for me even though I still have a day job,” said Ullman.

In 2012, Ullman was invited to give a Tedx talk, an affiliate of TED, Technology, Entertainment and Design, a media organization that posts “ideas worth spreading” for free online.

“I spent six months trying to figure out why anyone would care about whistling,” said Ullman. “I realized that whistling is not heroic. It’s just this simple thing, but because of its simplicity, I was actually able to touch people’s hearts with it.”

In his book, Ullman challenges people to find their “whistle,” or their God-given gift and share it with the world. “Mine happens to be whistling,” he said.

He talks about 10 other gifts, or “whistles,” that have touched his life in a special way. He features his mother’s gift of empathy; the homemade Christmas card his friend makes him every year; and the love of Father John Adams who founded “SOME,” So Others Might Eat, a nonprofit organization that provides food, clothing and health care to those in need Washington.

“The Lord has commanded us to use the gifts he has given us, to find those gifts, develop those gifts and share those gifts,” he said.

Ullman is the first to admit that he is not inventing a new concept. He only wants to give it a name, and in doing so, hopefully empower the next generation.

“(The whistles) don’t have to be heroic and they don’t have to change the world. All you have to do is think outside yourself and change one life, one heart at a time,” he said.