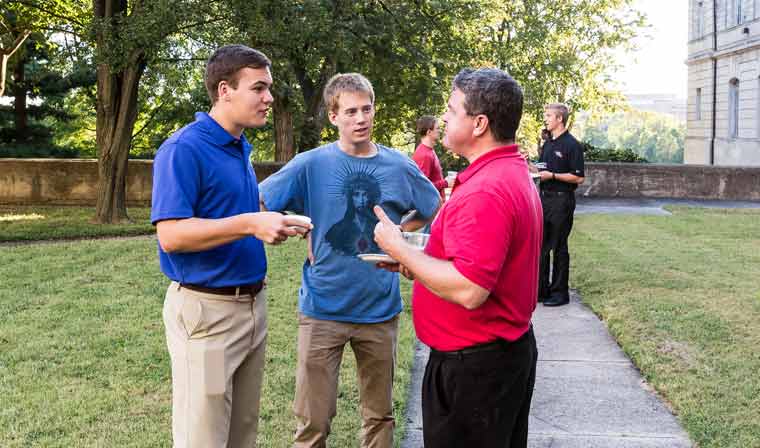 They consider possible call to priesthood

In the Fisherman’s Club, James Buttner says, fear is cast aside.

The club is a diocesan initiative of discernment that may lead to the seminary. As a former participant who is now a seminarian, Buttner said he is OK with “healthy concern” about whether to pursue formation for the priesthood. But irrational fear is out.

“Be open,” he said during a telephone interview from Washington, D.C. “Don’t be afraid to kind of look at things and where they stand and take a step in one direction that looks good.”

The Fisherman’s Club name is based on the fact that Jesus’ disciples were fishermen, said Father Jason Hage, who oversees the program. The club started holding meetings for any college-age male throughout the diocese last year at Le Moyne College.

Father Hage said meetings begin with prayer in the Shanahan Chapel. What follows are adoration of the Blessed Sacrament, Vespers, a talk on discernment, silent reflection and personal prayer, and Solemn Benediction. Then the group moves to the Campus Ministry Room in the Panasci Family Chapel for fellowship, food, and refreshments.

Father Bill Dolan, S.J., of Le Moyne College gives the attendees a perspective on joining a religious order, and Father Hage deals with the possibility of diocesan priesthood. Father Hage is the parochial Vicar at Holy Family Church in Syracuse.

He said about nine men attended last year’s sessions, which began after Bishop Robert J. Cunningham asked him to organize the discernment group. A handful of men are attending this year’s meetings of the Fisherman’s Club, Father Hage said.

Two of the men from last year’s group are now in their first stage of formation for the priesthood. One is Buttner, from Camillus. The other is studying at a monastery. Another man who attended the Fisherman’s Club meetings is now in the Peace Corps.

The idea of a vocation entered Buttner’s mind years ago, when he was involved with the Life Teen youth ministry group at Holy Family Church. After graduating from West Genesee High School, he attended Colgate University, where he joined The Melchizedek Project, a program that helps to foster vocation discernment on college campuses.

Helping to keep alive in his mind the possibility of the priesthood at that time were Father Joseph M. O’Connor, Director of the Diocesan Office of Vocation Promotion; Deacon Mark Shiner, Colgate University’s Chaplain and Catholic Campus Minister; and Father Hage, of Buttner’s home parish. Father John D. Manno and Father Richard P. Prior have also supported Buttner’s interest in the priesthood.

Buttner graduated from Colgate in 2015 and worked for about a year as an electrical engineering intern for SRC, a research and development company.

But after about 10 months, Buttner surprised a lot of his colleagues by announcing that he was going back to school — to the seminary.

Last year, Buttner graduated from Colgate, where he studied physics. In fall of 2015, he joined the Fisherman’s Club and attended monthly meetings for about seven months. Then, at the end of August this year, he started seminary-formation studies at Theological College, the national diocesan seminary of The Catholic University of America in Washington.

He has his own room upstairs at the Theological College, which is right across the street from the main campus of the university, and at the moment he is studying philosophy.

“I found a great joy and peace being here,” he said. He added that the seminary has “exceeded my expectations in just about every way.”

As of now, the program shapes up like this for Buttner: two years of philosophy, sometimes called pre-theology, because he has to play catch-up after studying physics at Colgate. Then he would take four years of theology at the graduate level.

Buttner sees his progression from physics and engineering to pre-theology as logical, because science and faith both require the pursuit of truth. And both, he said, require creativity. He foresees the importance of creativity in how he might reach out to people in a parish, and how he might construct homilies or approach evangelization.

As much as he enjoys the seminary, Buttner looks back on the Fisherman’s Club with appreciation as well. “It was usually the highlight of my week,” he said.

Father Hage figures that Buttner and the Fisherman’s Club alumnus who studies at the monastery are on a path not only to holiness, but also happiness. God, he said, “chooses us because he loves us and wants us to be a part of his great mission.”

Father Hage is himself a young man, going on his third year as a priest. He graduated from Xavier University in 2008. While he was there, he co-founded a student group called Life after Sunday. Of his classmates in that group, he said, two are now ordained Catholic priests, and another man is a Jesuit Brother who will be ordained in three years.

“I wouldn’t trade it for anything,” Father Hage said of the priesthood. “It’s amazing. … If that’s all I had, I’d be a happy man.”

Asked about the celibate life, Father Hage said only a selfish life produces a sense of isolation.

“I’ve never felt a great sense of loneliness,” he said, “because my priestly ministry leads me into very precious relationships with people and I am never totally alone.”

“I’m never not with people,” he added. “I’m with people all day.” He cited pastoral visits, hospital visits every week, anointing, baptisms, work with couples leading to marriage, pastoral counseling, and spiritual direction.

“People realize you’re there for them,” he said.

Father O’Connor has been a priest since 2005.

“I am not sure age has as much to do with our ministry as does noticing the inner working of the Lord,” he said in an email. “By paying attention to what is going on inside our own hearts, we work to shed light on the ways the Holy Spirit is working in the lives of the guys who meet at Fisherman’s Club.

“Most young adults are exhausted with fast paced and complicated lives. Fisherman’s Club meetings slow things down enough to see the simple beauty of letting your relationship with God lead you to your mission in life.”