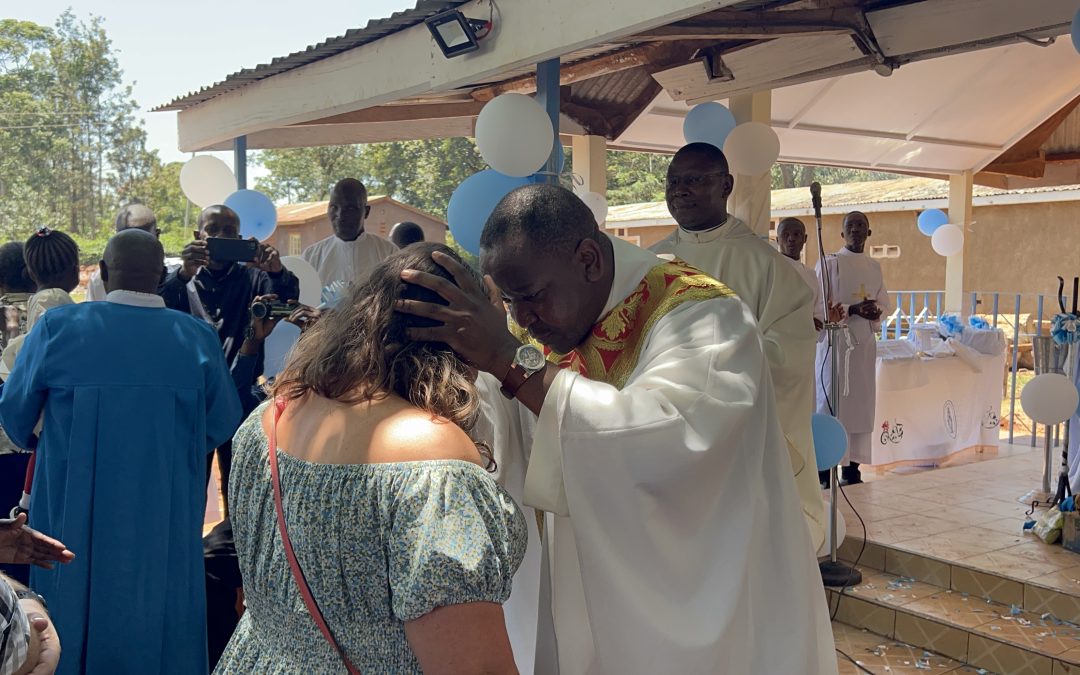 After waiting more than a year because of the delays associated with COVID, Father John Leo Oduor finally got to celebrate his Mass of Thanksgiving in his home parish in Ukwala, Kenya.

While Fr. John Leo was assigned with me as a seminarian at Our Lady of Hope in Syracuse, he would often describe to me the tribal customs that were associated with the celebration of a new priest. He explained that a priest is an elder in the tribe, and that there are appropriate rituals to mark that. I promised John Leo that I would be there to celebrate with him when the day came. On August 20th I was joined by a small delegation from the Diocese of Syracuse as we prayed and celebrated with Fr. John Leo, his family, friends and what must have been a thousand people from neighboring towns and villages. Fr. Michael Galuppi (the current pastor of Our Lady of Hope as well as St. Michael/St. Peter), Briana Howell (a Catholic school teacher from Endicott), Tom Graf (a parishioner of Our Lady of Hope) and I were moved deeply as we watched Fr. John Leo pray over the vast crowds, one by one. Fr. John Kennedy (a friend of Fr. John Leo’s) turned to me and explained that he had to lay hands on each person because unless they have been touched, they do not feel as if they have been truly blessed. I watched in amazement as the crowds danced their way up to Fr. John Leo and received his priestly blessing. I was moved by the devotion of the people and the joy with which they expressed it. I had heard that many African liturgies include dancing, but it still did not compute until I saw it for myself. It was so natural to the people to express their joy with dance. Following the Mass and blessings the rituals marking Fr. John Leo as an elder began. They placed traditional clothing on him, and they placed a spear in one hand and a shield in the other. They said this was so that he could protect and defend the people entrusted to his care.

The following day Fr. John Leo celebrated a Mass on his family’s homestead. The men of the community carried him in a boat up to the gate of the property while people danced and clapped with huge smiles on their faces. This was another of the rituals marking him as an elder. The community sang, prayed and showed their gratitude to God for the gift of a new priest. After Mass there was a feast and the singing and dancing went deep into the night.

It was a very powerful and moving experience to be with Fr. John Leo and his village. The faith and devotion that the people expressed was inspiring. This celebration was years in the making, and what a privilege it was to experience it.

Editor’s note: Fr. Odour was one of four priests ordained in June 2021 at the Cathedral of the Immaculate Conception and is currently assigned to Christ the Good Shepherd parishes in Oswego. Fr. Ballard currently is pastor of Spirit of Hope Catholic Community comprising six parishes in the greater Madison County area.