Future priests must be able to ‘see where mercy is needed,’ says nuncio 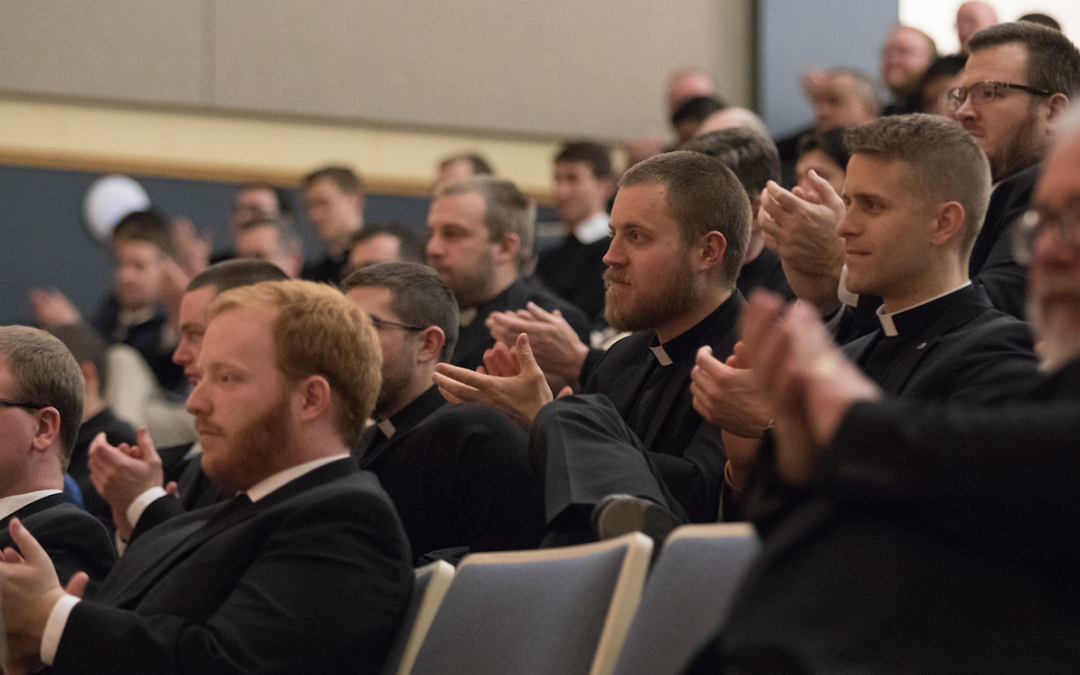 EMMITSBURG, Md. (CNS) — The apostolic nuncio to the United States challenged an audience of seminarians, faculty and staff at Mount St. Mary’s Seminary to see future priests not as functionaries of the sacred or managers of a business, but as compassionate pastors and missionaries who joyfully announce the Gospel.

“(The future priest) must have the ability to see where mercy is needed and the healthy zeal to make himself readily available to apply the healing balm of God’s mercy with the love of a genuine father and pastor,” Archbishop Christophe Pierre said in a March 8 address to about 200 people in Emmitsburg, which is in the Archdiocese of Baltimore.

The church needs a new missionary spirit, the French prelate insisted, one that encounters and engages an increasingly secularized world. Priests must be fundamentally trained to be heralds of the good news, he said.

“At times, we have this self-referential mentality,” he explained. “The pope is fighting against that. We are at the service of the people. We have a special ministry to help the people to live their vocation.”

Drawing from Pope Francis’ 2013 apostolic exhortation, “Evangelii Gaudium” (“The Joy of the Gospel”), and “The Gift of the Priestly Vocation,” a document from the Vatican’s Congregation for Clergy, the archbishop said theological and philosophical training in the seminary must first inculcate a sense of humility before God.

“Kneeling before God, with an open heart and an open mind, one learns amid the complexities of life and culture how to discern the path of truth that leads to authentic joy,” Archbishop Pierre said.

Referencing a talk by Pope Francis to Polish Jesuits in 2016, the nuncio said future priests should be attuned to the divine and the diabolical in the world. They must be able to discern what is from God and what is from the devil, he said, and have the ability to help people discern the “shades of gray” that prevail in life.

Seminarians also should be open to authentic dialogue with the world, he added.

“For that to happen, the Christian must be firmly rooted in his own baptismal identity, orthodox in faith and have a profound sense of belonging in the church,” he said.

Some in seminary formation may become obsessed with academics, the archbishop said, forgetting about the spiritual foundation. People often approach him to request good spiritual directors, the nuncio said. Parish priests themselves should be able to provide that outreach, he said.

“We should be equipped for spiritual direction,” he said.

Archbishop Pierre advised seminarians to recognize that their lives as priests will be ones of “permanent change.” He urged them to take the study of philosophy seriously and to continue studying long after they are ordained.

“Permanent formation is so important to understand the world,” he said.

At the outset of his talk, the archbishop said he wanted to “increase” the seminarians’ love for Pope Francis. Later, in a brief question-and-answer session, he noted that some Americans have a “total misconception of the pope.”

“Don’t spend your life reading the blogs about the Holy Father,” he warned. “Forget about that because you are wasting your time.”

Thomas O’Donnell, a 24-year-old first-year seminarian studying to be a Baltimore archdiocesan priest, said later that the nuncio reminded seminarians the church is not at the service of some insular sect, but has a universal mission.

“The Gospel is for the world, which is precisely why we need to study as much as we can, from many disciplines, and to go out to evangelize,” said O’Donnell, a member of St. Mark Parish in Catonsville.
During his visit, Archbishop Pierre blessed a new statue of Blessed Stanley Rother, an alumnus of Mount St. Mary’s Seminary who was assassinated while ministering in Guatemala. The Oklahoma priest was beatified last September during a Mass celebrated in Oklahoma City.

Matysek is digital editor for the Archdiocese of Baltimore.