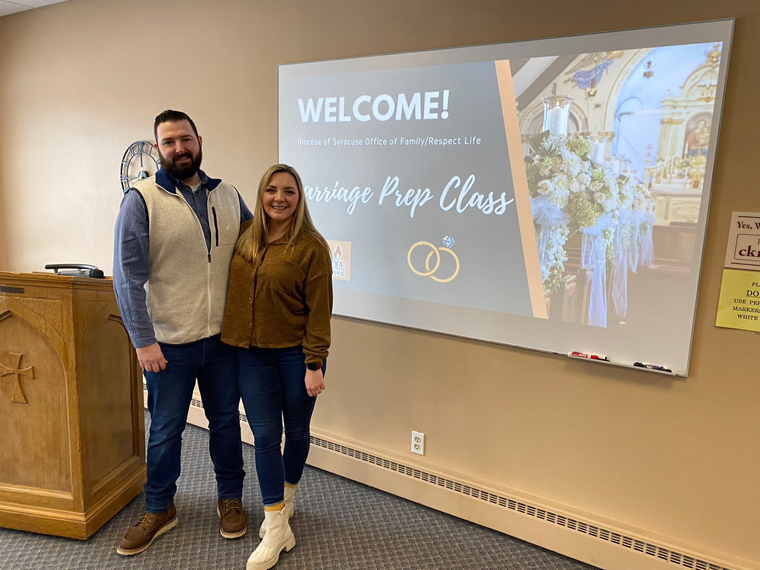 A wedding is one of the most joyous events that a man and woman—a couple—and their friends and families can experience. Like any life journey, proper preparation will help the wedding couple as they hope for nuptial peace, perfection and prosperity. Part of that preparation within the Catholic Church is attendance at a PreCana retreat day.

Earlier in March, the Catholic Sun kicked off a series of articles, tracing the steps toward the Sacrament of Marriage with Gabrielle Gleason and John Pattwell, an engaged couple from the Binghamton area who are planning a January 2023 wedding. This is our second installment, chronicling Gabby and John’s experience at a PreCana class held recently at Christ the King Retreat House in Syracuse.

Thirty couples took part in this retreat, presented by the diocesan Office of Family/Respect Life team. In the Diocese of Syracuse, Program Coordinator Morgan Durfee and the husband-and-wife team of Chris and Linda Padgett usually facilitate Pre-Cana. The Padgetts live in Central New York but present PreCana and other faith programs across the country. With strong personal faith, plenty of academic study and 30-plus years of marital life experience, the co-authors of books like Holy Marriage, Happy Marriage bring a unique style to PreCana.

“They bring a lot of humor to it, it’s their way of speaking,” says John, adding that “they have some impactful things to say.”

Gabby adds, with a knowing laugh, that “I think there have been a lot of past PreCana experiences that may have been a little painful, at least my parents and friends were saying about it. It’s kind of refreshing. … The Padgetts take a more modern approach.”

Some 30 couples participated in the class that Gabby and John attended.

“We enjoyed meeting a few new couples and seeing old friends; all of us in the same boat,” Gabby says, adding that she ran into another couple there that she went to high school with. There was also at least one couple there who appeared to be of middle age, giving testimony to the fact that all couples who are planning to wed can use good advice and faith-based guidance as they plan to spend the rest of their lives together.

“A lot of it had to do with how open the speakers were. … They told some very intimate things,” according to John. “It really grabs your attention when people are that vulnerable when speaking,” he added; he appreciated the candor and transparency that the presenters offered. “Morgan did a great job. … She told us about her experiences and how it made her stronger as a person.” John also personally observed that “when you have the right partner with you, you can really do anything.”

Talking about the typical roles in marriage, the Padgetts said it is usually the female that is the primary advocate for faith in the relationship. It is very apparent in conversations with Gabby and John, though, that they are a team in life and in this walk to the sacrament of marriage. Gabby says they support each other in their challenges.

“It is both of our jobs,” she stresses. “I might fall off, John might fall off in anything … finances, working out, spiritual life … but we are a team, and we help each other.”

Providing great inspiration, John said, were married couples who shared their individual experiences with the group.

“One woman suffered a couple of miscarriages, and they were struggling as a couple … but they stuck together, stayed with each other,” John observed. “You really need to be there for your partner through thick and thin.”

The day also included time for the Sacrament of Reconciliation and Eucharistic Adoration.

“It was nice to just sit in there with everybody and have calm and quiet,” John added, saying that it was good “to have a moment to think after all the talking, to have a moment of peace to yourself,” with time for prayer and reflection on what had been discussed.

Gabby shared that the day truly helped her prepare for “something neither of us have experience with … but it’s going to be an exciting journey.”

John added that the day added to and affirmed the structure that already exists in their lives but pointed out that “if you have the right person, you can get through everything together.”

Keep reading the Catholic Sun as Gabby and John con

tinue in their preparation for a Catholic marriage celebration.