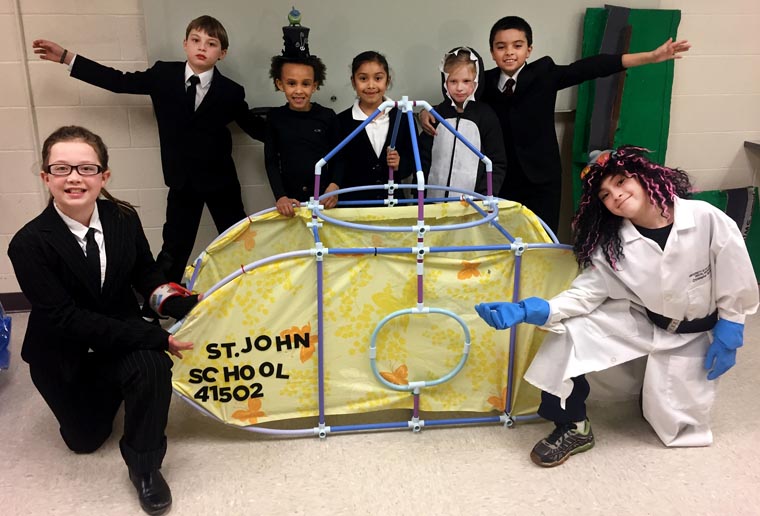 St. John the Evangelist School’s Odyssey of the Mind team will be competing in the World Finals May 24-27 at Michigan State University.

This honor follows the Binghamton school’s first-place finish in regional and New York State competitions. In New York State, the competition started with approximately 4,880 students. The St. John’s team members are among just 230 from New York advancing to the World Finals.

The World Finals is an international creative-problem-solving competition hosting teams from throughout the United States and more than 20 other nations. This year over 825 teams from across the globe will be competing at the 38th Odyssey of the Mind World Finals.

They have been meeting two to three days per week after school and some weekends since January.

The team is raising funds to help offset the cost of attending the finals, estimated at more than $18,000. Those interested in helping the team can make checks out to St. John’s School OM and forward them to 9 Livingston Street, Binghamton, NY 13903.

Coach Malmquist said it’s a fun program because every team puts its own creative spin on things.  “Our team’s theme was turning the evil in the world good,” she said.

Here’s the synopsis of the problem that the St. John’s team solved (all problems have an eight-minute time limit):

Problem 1: Catch Us If You Can:

This is your Odyssey, should you choose to accept it. Your team will design, build, and run vehicles from a multi-level parking garage to a secret meeting place without being stopped. Vehicles will travel different routes to reach the same destination. During their Odyssey, the vehicles will do something that prevents them from being followed. The performance will include the reason for the meeting, someone that wants to prevent the meeting, a simulation of a scene taking place inside a vehicle as it travels, and a soundtrack to accompany the vehicle’s travel.  Cost limit: $145.

In the story that the team created, evil villain Dr. Sharktoris was planning to take over the world, using his submarine and roboshark as weapons. Fortunately, he couldn’t prevent the Overwatch secret agents from getting to their secret meeting. Their vehicles — a space ship (marble that rolls down a track), a rubber-band-powered car, and a motor-powered car — successfully deliver them to a cave in Hollywood where they plan how to prevent Dr. Sharktoris from destroying the world.  In the end their cheery ways win him over and he joins Overwatch to protect the world from future threats.

For more information about Odyssey of the Mind, visit http://odysseyofthemind.com/p/.