Gabby & John are getting married: Meet the groom! 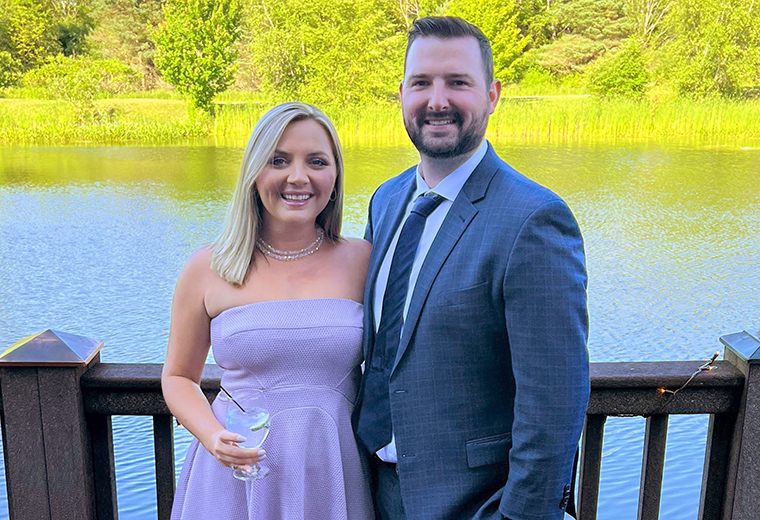 The time is winding down to January 2023 and the wedding of Gabrielle “Gabby” Gleason and John Pattwell, the Broome County couple we have been following this year as they prepare for their nuptials.

The couple are “ahead of the pace,” says John, our sole guest in this installment of the “Gabby & John” series. With about five months to go until the bells ring, most of the details for the wedding are in place, “except for the limo service and florist … that’s about it.” John admits that much of the planning has been Gabby’s domain.

“I pretty much let Gabby make the final decision on everything,” adding that he is “in charge of the finances.” As is the case with many couples, one half tends to make the party plans while the other tends to the payment plans.

“I keep her on track in that way,” says John, “but she definitely is the one to say, ‘This is a special event, we need to have nice things there,’ and she’s right. She definitely brings the fun out in me.”

That’s not all she has brought out in John recently.

“I’ve never been a cat person in my entire life,” John tells us. Gabby, however, thought a little feline friend would be a great addition to their relationship and, as any good groom would do in this situation, John agreed to adding a cat to the family, a rescue found in a church parking lot. “That was definitely a test,” John confesses as the cat “needed a home.” Gabby drove from Binghamton to Sandy Creek (where her family has a camp) to pick up the stray. The drive home was “the ride from h***” according to John. Within a couple of weeks, John noticed that the feline was gaining weight. “Her stomach was getting a little bigger, and I figured she hadn’t been eating regularly,” but now she was. The increase in size, however, outpaced the intake of food. “Something’s going on here,” John realized, “kittens are on the way.” 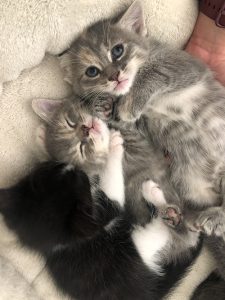 The newest members of the Pattwell-Gleason extended family.

Four kittens to be exact. Three of the little ones — George, Fran and Loretta — have been placed in comfy homes. The fourth, Dorothy, is now part of the Pattwell-Gleason marital merger, along with Mama Cat, of course. “For about six or seven weeks we had the four kittens to deal with. It was a great test of our relationship,” John says. “It’s one of those things that you take with a grain of salt, you learn from it. It’s never a dull moment.”

“Definitely my patience level,” says John who confesses that he is not always a patient person by nature. “It’s got to go way up, you’re not the first person anymore when you have animals relying on you. They’re good to you. They give you love so you give them love back.”

Still to come in planning includes putting the finishing touches on the wedding liturgy. Father John Donovan, who was pastor at Our Lady of Sorrows parish in Vestal, has moved to Sacred Heart Church in Cicero, a new assignment that took effect on July 1. However, he will still preside at Gabby and John’s nuptials in January.

“My mom is doing the rehearsal dinner.” John says Mom was talking to Gabby about restaurants, but the bride-to-be keeps an office at the church where “they have a nice banquet area. It will be nice to have the rehearsal and then just walk right into the next room and enjoy a meal together.”

John adds that “there is always something special about sharing a meal together,” pointing to the many passages in Scripture where hospitality and breaking bread brought people together.

As mentioned in previous installments of this series, John has brothers, no sisters, and he is the first to be married. He shares that Gabby is the sister and daughter the Pattwell family has never had. They love her, of course, but we still asked John if his brothers tease him at all about being the first to make the walk to the altar.

“No, not really. But they definitely kidded me a lot about the cat and the kittens.”

As the first son in the family to get married it has created a wonderful and new sense of excitement for his family.

“We’ve never had a daughter or a sister,” John says. “It’ll be nice for my mom to have a girl as part of the family, to do the spontaneous stuff” she doesn’t have the opportunity to do with the sons. “That’s one of my favorite parts of this, that my mom will have the daughter she never had.”

And John will have the special person he has never had either. He has great faith in his future wife. “I trust her,” he says, and he has great trust in God. “I feel the decision was made for me. I was always meant to be with Gabby and that’s how it ended up.”