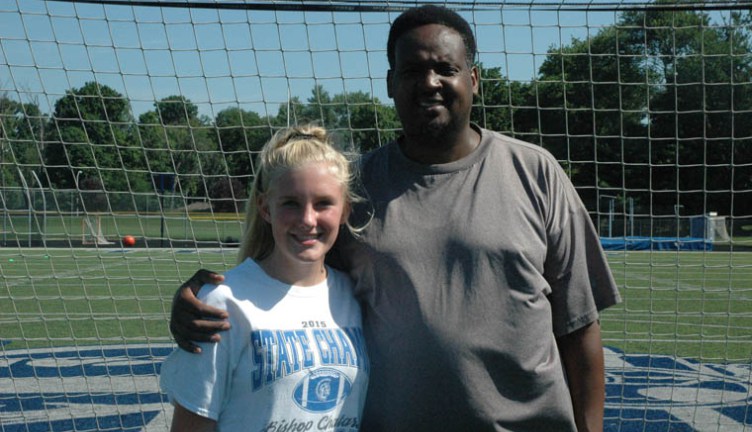 Kizito Kalima, right, a survivor of the 1994 genocide in Rwanda, poses for a photo with 16-year-old Olivia Julian June 29 at Bishop Chatard High School in Indianapolis, where he held a soccer clinic for youths born in the refugee camps of that African country. CNS photo |John Shaughnessy, The Criterion

INDIANAPOLIS (CNS) — The game stopped for a moment, but the smiles continued as everyone paused for a group photo on a sun-splashed summer morning.

Standing side by side, from different backgrounds and different worlds, the 21 individuals combined to provide another intriguing snapshot of the promise and the possibility that is the United States.

In the group, there were 14 children and youths born in the refugee camps of Rwanda — the sons and daughters of parents who want a better life for their children.

There were five students from Bishop Chatard High School in Indianapolis — friends and teammates who have set aside this time to share a morning of fun and play.

There was the college student with her arm draped around the shoulders of one of the youths, both smiling in a way that seemed to show they don’t dwell on the difference between the colors of their skin.

And there was the towering figure of a man who has lived the horror of his parents being murdered, leaving him an orphan at 14 — a man who has made it his mission to promote peace, forgiveness and reconciliation as a way of life.

All of them were together for a clinic on soccer. In many ways, it also was a clinic on hope.

The clinic was the inspiration of Olivia Julian, a 16-year-old member of Immaculate Heart of Mary Parish in Indianapolis who has been inspired by the life and purpose of 39-year-old Kizito Kalima — the towering man who was cut in the head with a machete and left for dead when he was a teenager.

Their paths first crossed when Kalima was invited to share his life story with a class at Bishop Chatard. Julian listened in awe as Kalima detailed the 1994 genocide in Rwanda in which extremist members of the Hutu ethnic majority killed about 800,000 people, mostly of the Tutsi minority, during a three-month period.

Kalima’s parents were killed in the massacre. He was left for dead in a ditch overflowing with bodies as blood gushed from his head.

His family and his home destroyed, he lived in swamps, a refugee camp and an orphanage for a few years — always finding a way to survive — until a basketball coach saw him playing the game in a park. When Kalima’s height and athletic ability made him stand out among the other players, the coach enrolled Kalima in a boarding school in return for playing for his team. And Kalima’s size and talent eventually drew the interest of scouts for colleges in the United States.

Listening to Kalima’s story of devastation and survival, Julian was overwhelmed.

“It was really amazing he went through all that,” she said. “It’s amazing he’s here now.”

Yet those details weren’t the part of the story that stunned her the most.

When Kalima came to America, injuries soon derailed his playing career. Still, he graduated with a criminal justice degree from Indiana University in South Bend in 2005.
At the same time, the nightmare of the genocide in Rwanda continued to haunt him.

“I was depressed, angry and traumatized,” he told The Criterion, newspaper of the Archdiocese of Indianapolis. “A lot of my friends were still bitter. I wanted to find a solution for my anger and trauma. I wanted revenge on the people who killed my family.”

Yet Kalima also began to understand that his anger just resulted in the killers “holding me psychologically hostage from Africa.”

He began to talk about the experience of the genocide, and shared his stories with groups. He also focused on the lives of Mohandas Gandhi, St. Teresa of Kolkata, Nelson Mandela and the Rev. Martin Luther King Jr.

“Those people forgave those who did them wrong,” he said. “I found it worked for me, too.”

He started the Peace Center for Forgiveness and Reconciliation, and opened its office in Indianapolis in 2016. The center hopes to help people and communities who are struggling with injustice and anger by promoting forgiveness, healing and reconciliation.

“It’s to be in charge of your own life,” said Kalima, who is married and a father of three. His children included two adopted children, now in their 20s, who also were orphans of the genocide. “I want to help people stop surviving and start living.

“For me and people like me, forgiveness is the only way to move forward. No matter how many people they put in prison, they will never bring back my parents or my childhood. Once you forgive, you can reconcile and live in peace.”

“It was amazing that he could forgive them,” she told The Criterion. “I wondered if I would be able to do the same if I was in that situation. It’s had an impact on my life.”
The idea for the soccer clinic grew out of Julian’s involvement at the Peace Center during the past school year.

When she wasn’t playing soccer or lacrosse for Bishop Chatard, she volunteered weekly during the center’s after-school program, helping some of the 300 children and youths who come there every month, many of whom were born in refugee camps in Rwanda and neighboring Burundi.

“When I mentioned soccer to them, they got excited. The majority of them love soccer. I thought it would be good to do a clinic for them.”

Kalima watched it all from the sidelines, savoring the connections being made between two groups of young people from different backgrounds.

“It’s good for her as a teenager to do this,” he said about Julian. “It’s inspiring. It’s good for the kids, too. They’re Congolese. All of them were born in refugee camps.”It helps them learn from different cultures and races. It shows them it’s good to come to America. They come from rough neighborhoods. This gives them hope that there is something better than where they live.”

The experience of being involved with the Peace Center also has left its impact on Julian’s identity.

“I feel I’m living my faith by doing this. Just by helping others, no matter how small it is, it helps.”