The 31st annual HOPE Appeal campaign is now underway. This year’s theme is “Now More Than Ever Your Gifts Give HOPE.” The goal is to raise $4,150,000 in pledges and contributions that will be distributed among the seven counties of the diocese.

According to Syracuse Diocese Director of Stewardship and Development Christopher (Kit) Parker, the HOPE Appeal has exceeded its goal for the last five years.

Some of the programs funded by the HOPE Appeal include tuition assistance for Catholic schools, the Newman Centers, Asian and Spanish apostolates, Catholic TV, hospital chaplains, family life and youth ministry programs, religious education programs, vocation promotion, the Catholic Deaf community and many others. These programs facilitate meeting the spiritual, emotional, pastoral and physical needs of people in the diocese on a daily basis.

Understanding the importance of the campaign, Father Kevin Hannon, pastor at St. Ann’s in 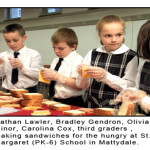 Manlius, placed a letter in the church bulletin the weekend of May 2-3, advising his parishioners that if they needed to make a choice between donating to the HOPE Appeal or to St. Ann’s because of the poor economy, they should choose the HOPE Appeal.

The weekend of May 9-10 was designated as the weekend to kick off the HOPE Appeal week. Parishioners in the Syracuse Diocese were informed that they would receive a mailing from the diocese with information about the HOPE Appeal and a pledge request. They were invited to return their pledge card to the parish the following weekend for HOPE Appeal Commitment Weekend May 16-17.

Paul Drotar, business manager at the Cathedral of the Immaculate Conception in Syracuse, said the campaign has been successful at the Cathedral for a number of years. “We’ve always come close to our goal,” he said. “We send a low-key letter to our parishioners the week before,” he said. “And we also display HOPE Appeal posters and provide envelopes at the Masses. We gage the parishioners’ response before contacting them a second time.”

The same procedure is followed at St. Anthony of Padua Church in Syracuse. “We also show the HOPE Appeal video during Mass,” said St. Anthony’s pastor Father Robert Chryst. “The people we don’t hear from, we follow up with a letter or phone call. We encourage everyone to contribute and over 70 percent usually participate. The campaign has been successful over a number of years and hopefully  it will continue to be.”

During the past campaigns, 85 percent of parishes that presented the video met or surpassed their HOPE Appeal goal.

The video opens with Bishop James Moynihan conveying the message that as people of both faith and good works, all are called to love God and to love one another. “One way we show our love for each other is by reaching out to those in need,” said Bishop Moynihan. “It’s through your gifts to the HOPE Appeal that we continue to serve many in our diocese with programs that feed the hungry and clothe the poor, that bring comfort to the sick and the homebound and that help to educate our children and adults. In addition, significant portions of your gifts are returned to your own parishes to support food pantries, youth programs and senior services.”

The video also includes a message from Bishop Thomas Costello which emphasizes the importance of supporting the campaign. “Thirty-one is a very important number to me this year,” Bishop Costello said. “In that very first year of my episcopal ministry, the HOPE Appeal was launched. For 31 years, your generosity has supported the works of the church. We ask that you continue to be generous.”

In the video’s conclusion, Bishop Moynihan said, “The Apostle John reminds us that we should love not only in word or speech, but in truth and action. This call to action is important, now more than ever. Remember, your gifts give hope.”

The DVD is available in each parish throughout the diocese. Those wishing to donate should either see their pastor or contact the HOPE Appeal office at (315) 472-0203.