Older Americans look to stay active and engaged after retirement

For many people, retirement doesn’t mean the end of something, it means the beginning of

The important thing for those whose careers have reached their conclusion is that they remain active and engaged in society, according to Msgr. Charles Fahey, a priest of the Syracuse Diocese who is currently the head of Fordham University’s Third Age Center.

He pointed to parish life as a particularly appealing calling for many retired individuals. “If you look at your typical parish, the disproportionate number of people involved in parish life are older or retired,” he said.

Msgr. Fahey also cited deacons as an appealing role for retired men. “That’s an increasingly ‘third age’ phenomenon,” he said, referring to the phase after childhood and one’s career.

Msgr. Fahey stressed, however, that retired people do not necessarily need to make that kind of extraordinary commitment. In many cases, it can be enough to simply play a role in one’s community. “Sometimes it can just be in a neighborhood — just be a good neighbor,” he said.

Msgr. Fahey has been involved with older Americans throughout his vocation. When Bishop Walter Foery assigned him to Catholic Charities of Onondaga County in 1961, the agency’s staff had determined that the aging population should be one of its top priorities. Msgr. Fahey has been involved with that segment of the population ever since. During his tenure at Catholic Charities, Msgr. Fahey was instrumental in developing Loretto Senior Housing.

In 1961, the first White House Conference on Aging sought to address the challenges facing an increasingly older American population.

Since the first conference on aging, the population of older Americans has expanded considerably. The U.S. Census projects that the percentage of Americans over 65 years of age will increase by 147 percent between 2000 and 2050. 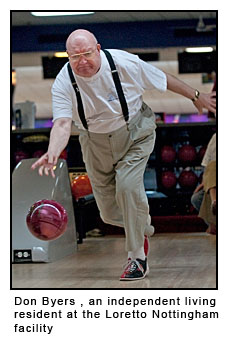 In the near future, the U.S. will see an enormous increase in the older American population as the generation of “Baby Boomers” — those born directly after World War II — enters late middle age. “This will be a strain on the public’s resources but it could offer an explosion of people who could be involved in community building,” Msgr. Fahey said.

Over 1,000 retired individuals have signed up for the federal program at 140 sites.

Some of the programs retired people involved in RSVP have participated in include adolescent services, adult day care, disaster relief, conflict resolution, fund raising, gardening and Meals on Wheels. The program is open to those in the Binghamton area that are 55 years of age or older and have the time to contribute consistently.

Catholic Charities of Broome County employee Tammy Hodges has been involved with RSVP for five years and has been its director for three years. She said the program is particularly popular with the World War II generation. “It helps seniors so that they’re giving back to the community, that they’re doing their civic duty,” she said. RSVP, according to Hodges, helps retired people stay involved. “It’s really good for volunteers to make them feel needed, that they’re still useful and valuable,” she said, adding that retired people often develop important friendships through volunteer work.

Without staying involved, Hodges noted, retired people can lapse into despondency. “Many have said they would probably become homebound,” Hodges said. “If you don’t have friendships, you settle into a kind of depression that affects the whole of your well being.”

Seventy-six-year-old Johnson City resident Yvonne Codner retired in 2005 and joined the program almost immediately. Her mother, Anna Banneaux, was the last charter member of RSVP in Broome County before she passed away that same year.

On Tuesdays, Codner spends her day with the knitting and crocheting group and on Thursdays she participates in the sewing group, making items that will be donated to various charities. “I think, for myself, it gives structure to my life,” said Codner, a parishioner at St. James Church. “Without it I would just fritter my days away. It’s also social. I’ve made so many friends. It’s very uplifting.” Codner added that it is also important to her that she make a contribution to society. “My income is limited but I have time, so that’s what I give,” she said.

RSVP in Onondaga County operates primarily in programs involving literacy among at-risk youths in both public and parochial schools, disaster relief, visiting isolated older people in their homes and maintaining telephone contact  with older people.In addition, Clary noted that Catholic Charities of Onondaga County maintains an ombudsman program in which volunteers advocate on behalf of seniors in long-term care facilities.

Syracuse resident Barry Nicholas retired three years ago at the age of 62. Before that he spent 25 years as an engineering assistant with General Electric and then, before retirement, he spent three years as an account manager with www.tickets.com. After Nicholas’ last day on the job he sat back and relaxed — and then grew bored. “After retirement I sat home for about a month watching day-time TV and I thought, ‘I can’t do this,’” Nicholas said. Around that time, Nicholas received literature from the AARP calling for volunteer ombudsmen who would advocate for seniors requiring long-term care. “I thought it looked pretty interesting,” he said.

For the past three years, Nicholas has walked the halls of Foxwood Heights in Syracuse. He listens to the residents there and he lingers at the nurses’ stations. At the nurses’ stations, he finds out which residents are receiving the fewest visitors and he makes it a point to visit them. Nicholas said, “It’s nice just to talk to them.” He frequents the dementia area on the sixth floor whenever he can. Those patients receive few visitors. Their long-term memories are firmly intact, but they only vaguely recall Nicholas’ face, if at all. Regardless, he listens to their stories and communicates with them. Nicholas said that he finds a kind of inspiration in the contact, the sense of being there for someone.

In general, however, his tasks are much more mundane. Nicholas advocates for the residents routinely. “I don’t try to change the world because I know that I can’t,” he said. “But I try make a small difference. I win some small victories.” Nicholas noted that he envisions himself in the place of the residents during each encounter. “I’m 65 and I might end in a nursing home so I want to know the ropes,” he said. For the most part, however, Nicholas is content to interact with the residents.

Loretto, an eldercare facility in Syracuse, looks to maintain an active life for its residents regardless of their age. According to the facility’s communications director, Michael Connor, its mission, to provide for older or elderly persons, has three interconnected elements.

Don Byers retired as a Presbyterian minister in 1998 and moved into the Loretto residence The Nottingham with his wife Virginia shortly thereafter. Byers noted that the physical and social aspects of life at The Nottingham have been vital to his well being. “It’s a cruise ship in dry dock,” he said, adding that the residence provides exercise equipment, a pool and “excellent meals.” Byers believes he is in better physical condition at age 75 than he was four years ago due to the regular exercise and activity. “With senior living you have to make a decision: Do you want to live alone or do you want to live in a group? One man told me he was living alone and just rotting away. I think, if anything, people wait too long,” he said.