God in meter and rhyme

Since the 1950s, the Catholic Church has sought to amend its once complicated relationship with science.

Starting with Pope Pius XII’s 1950 encyclical Humani generis, the church has found common cause with science more and more often.

In his debut book of poetry, For My Grandchildren: A Book of Wisdom, Samuel Donnelly, a retired Syracuse University  law professor, explores the relationship between God and science.

“You have a vast number of American people who oppose science and evolution. And I know that my grandchildren are going to be interested in science, so I wanted to show them how to find God in the presence of science,” Donnelly said.

Donnelly establishes the book’s theme almost immediately with the poem 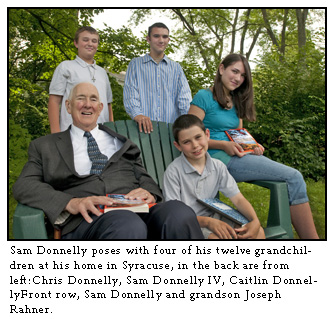 Donnelly’s purpose was to collect poetry that could be read by his grandchildren. The Holy Cross in DeWitt parishioner explained that he believes his grandchildren will share his interest in science as they grow older, and he wished to be able to communicate his own ideas on the matter.

One of his older grandsons, Samuel Donnelly IV, has already read the volume.

“Not to be prejudiced because it is my grandfather, but I thought it was really good. It had a lot of really good insights, especially when you’re dealing with religion co-existing with science,” said the younger Donnelly, a junior at Bishop Grimes Junior/Senior High School in Syracuse.

Donnelly cites Robert Frost and Seamus Heaney as particularly important influences on his work. Their plainspoken approach to verse, Donnelly felt, would make the message more readily accessible to the young people it was intended for.

“If you look through it you’ll find that most of the poetry is plainspoken and that has two purposes — one is the influence of Robert Frost and Seamus Heaney, but it also is designed to not turn off the young people that I would like to read it in the late years of high school or the early years of college,” he said.

Donnelly wrote on the back of his book that he has “12 grandchildren and counting” as his daughter Catherine will be married in the fall.

Catherine Donnelly was among the book’s initial proofreaders. An attorney in Cleveland, she has published numerous poems in literary magazines. She said her father’s poetry offered both a personal and an aesthetic impact.

“I had personal reflections and reflections as a poet. I was particularly struck by his nature poetry,” she said. “And that’s personal, because reading is something I share with my father.”

She elaborated that the volume offers an insight into her father’s intellect and philosophy and that it expressed the connection she feels he extended to her.

“I was overwhelmed to a certain degree by the way that the book — with each poem building on the other — presents the moral philosophy that he passed on to me,” she said, adding that the personal dimension of the poetry also made a strong impression on her.

“I was very interested with how the poetry — the craft of it — was dealing with things that are very personal to us as a family,” she said.

The book is divided into two sections. The first is entitled “The Eternal Shapeshifter” and the second, “The Jigsaw Piece.”

Donnelly revealed that while much of the verse was written after his retirement, several pieces were penned in his youth.

He said he has been inspired by the relationship between God and science since his youth as a student at St. Francis Xavier in New York City, where Father Tomas Egan, SJ, was both his chemistry teacher and his religion teacher.

“He often talked about the relationship between religion and science,” Donnelly said.

Donnelly said that beauty is one of the more significant themes in the book.

“Beauty is something that is spread over the top of the world. It is something that is gratuitously added. It’s not something that’s necessary to the science or to the survival,” he said. “Some scientists will tell you that a flower is beautiful to attract bees and humming birds and help in the pollination but mostly beauty is not utilitarian; it is added on top of things.”