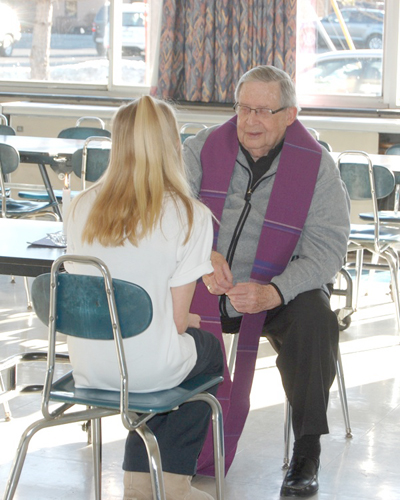 School is evidenced by two school wide penitential services that are part of the spiritual life calendar. One service is offered during Advent and the other during Lent. If a student chooses, the sacrament of reconciliation is also available after daily Mass with our chaplain, Msgr. Richard Kopp.

In preparation for the sacrament of reconciliation, the Spiritual Life Committee (a group of teachers and students, who are peer ministers) chooses a theme. The students incorporate this theme into a video prayer service that is shown on BGTV (the in-school TV network). The preparation for this year’s BGTV prayer service actually began last year in Mr. Peter Capponi’s junior religion class as a project. The students were asked to find Scripture passages and write an examination of conscience that fit the theme. The students also included ideas for a skit to demonstrate the theme and added an opening and closing prayer. The service was then enacted by the senior religion class, filmed and edited by the broadcasting class, under the direction of Ms. Deborah Foster. This video was played throughout the school prior to the reconciliation service.

The theme for Lent this year is “Cross Words.” The Spiritual Life Committee provided small crosses for all members of our school community. In the religion class, students were asked to spend some time thinking about their own “cross words” of Lenten practices, and these words were written on the small cross in a crossword fashion. During this Lenten season, they were asked to pay special attention to the words they chose. The peer ministers created a Lenten cross made of crossword puzzles from newspapers and magazines, and the smaller crosses, provided by students and staff, surround this cross. The Lenten Penitential Service was celebrated Tuesday March 16. It began with a seven-minute video prayer service shown to the entire school during homeroom over BGTV. Following that, with the assistance of priests from the diocese, students were given the opportunity to receive the sacrament of