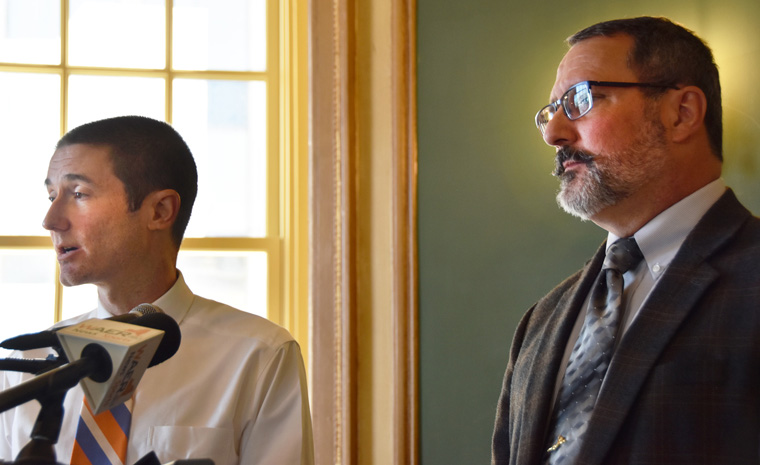 Daniel Paden, left, and Matthew FitzGibbons address the news media Sept. 5. “There’s so much anger and hatred in the world that what needs to happen for evil to win is for good people to be silent,” FitzGibbons says. (Sun photo | Tom Maguire)

Two men emphasize mercy as they continue their healing journey

Betrayed and sinned against, they offered blessings and hope for their abusers.

Two men who were abused by Catholic priests announced Sept. 5 that they reject bitterness, anger, hatred, finger-pointing, and negativity.

“The narrative by and large on this topic today in our country looks to me to be frozen in a cycle of bitterness,” said Daniel Paden, 42, “with criticism of various dioceses’ efforts to right past wrongs with calls for bishops to resign, for Catholics … to stop going to church, to stop donating to the Church’s mission, and so much more. And as a victim, none of that has helped me heal.”

“Dan and I decided we can’t be silent and how do we get love out there into the conversation once again,” said Matthew FitzGibbons, 58.

Although there is still some darkness for them (“It doesn’t go away”), both men urged forgiveness at a news conference at the Marriott Syracuse Downtown. Attendees included members of the media and diocesan personnel.

Paden works for a nonprofit animal-protection agency in Virginia. Together with police and prosecutors, he tries to rescue animals from various cases of cruelty, neglect, and abuse.

A member of the Church of the Holy Family in Virginia Beach, he was speaking publicly about the abuse for the first time. “You can bring good from terrific evil,” Paden said.

He started grappling with the experience around 2008 when he was 31; the one incident of abuse, he said, occurred about 20 years before that in the 1980s in Broome County, where he grew up. The priest, who had baptized him, died in 2000, he said.

The key to survival

“My faith is what really allowed me [to] survive. Literally survive,” FitzGibbons said. He added: “I’ve been active in my church for really all of my life.”

He is a human-resource professional who currently is a training consultant for a local nonprofit company. He grew up in a “very faith-filled household,” he said. FitzGibbons currently is a member of Immaculate Conception Church in Fayetteville.

He said he was abused on one occasion almost 50 years ago — “I was very young.” He said the abuser is still alive.

FitzGibbons has spoken about the abuse previously; he wrote a letter to the editor that appeared in the Sun  ahead of a prayer service for healing that he organized in May at Le Moyne College. He surfaced memories of the abuse about 18 months ago.

Paden believes strongly that dialogue is key. Both he and FitzGibbons were in communication with Diocese of Syracuse Chancellor Danielle Cummings separately. FitzGibbons expressed interest in speaking with another victim-survivor, and Cummings put them in contact with each other.

“When I started working on the healing service,” FitzGibbons said, “I started connecting with Dan, and so we’ve done a lot of emailing back and forth.” They finally met for the first time three or four weeks ago — “just sharing our perspectives with each other,” FitzGibbons said.

“Luckily,” FitzGibbons told the assemblage at the Marriott, “my wife [Karen] is here and an amazing support for me through this whole entire process, and my whole family has been very supportive.” The couple has three children.

“First I want to suggest that as victims and as a society we stop condemning abusive priests,” Paden said. “And I look to Christ as an example of this.” He cited John 8:1-11 — the story of a woman caught in adultery. Paden noted that no one cast a stone at the sinner who found herself in the spotlight that day.

“We can’t forget that one day, we too will be judged,” Paden said, “and we will be measured by the very measure that we hold others to.

“Second, I want to suggest that we, as victims and as a society, strive to forgive abusive clergy. After all, in the Our Father we pray, ‘Forgive us our trespasses as we forgive those who trespass against us.’”

Forgiveness, he said, is “something that we have to extend actively to those who harm us,” even egregiously.

Paden noted that Christ asked mercy from God toward those who put him to death. “I think if Christ can do that,” he said, “I think that we can find it in our hearts to ask forgiveness for abusive priests.”

A third key point for Paden is the need to pray for priests who have abused others.

“No matter who the perpetrator is,” he said, “no matter who the victim is, sexual abuse is obviously a grave sin, and I believe it must weigh heavily on the souls of those priests who have passed away, as my abuser did in 2000. But I pray every single day that my abuser has found peace after bodily death and I pray that God has mercy on him for his failings …, but I also pray that God rewards him for all the good that he did too.”

Citing the Parable of the Lost Sheep, Paden said the Christian thing to do is not to turn one’s back on an abuser “and to discount him and to treat him as if he’s a leper. …, rather, to pray for that individual’s return to God.”

Calling on the monks

Recently, Paden had a series of 30 Masses said by an American monk for the repose of the soul of the priest who abused him. An important part of his healing, he said, has been to place his abuser “before God in a kind and loving way, and not in a harsh, critical, and condemning manner.”

Paden recalled that last December, the diocese released the names of 19 men — still living at the time — who had been credibly accused of sexual abuse of a minor; of the 19, 15 were permanently removed from ministry, two were laicized, and two were dismissed from the clerical state.

He added: “Healing’s obviously needed by the many women and men who were abused by priests, and so every morning and every night, I take two minutes to hold those individuals … in my heart before God and before a crucifix, and I ask that God bring to those individuals comfort and consolation … that in due time, the trust that’s been taken from [those] individuals can be restored.”

Both men are open to being contacted by other victims. “That would be perhaps the most important thing to come of this if that were to happen,” Paden said.

“It would leave me broken, lonely, forever sad, hopeless, and helpless. I’m not saying that these feelings are wrong, but they are traps that I’ve had to navigate as I try to reclaim my life.

“Thankfully, my God has kept me from being always and forever ensnared by anger and hatred. There is another way. I am deeply disturbed when I hear of [other] scandals in my Church. I’m angry at the lack of transparency by Church leaders. I worry about future revelations that might come to light.

He said Jesus and God constitute his rock. “And I plan to reclaim my life on that rock. My renewed intimate relationship with my God is the light that endures from this despair.”

With the help of friends, family, diocesan personnel, and professional and spiritual guidance, he helped write the healing service attended by 130 people in May at Le Moyne.

“It was a sacred night,” he said. “That can’t be the end of our healing. … We’re all in different places in our healing journey.”

To him, being stuck in anger is like being stuck in the muck at the bottom of a pond. Pouring in the “clear love of God is like pouring clean water into that pond,” he said, helping him, other victim-survivors, and also the community to heal.

“We need to expand ministry services to victims. We need to have the dioceses of our state and of our nation work together to holistically minister to victims and the families. …

“We recommend to the diocese that they create a Victim Advisory Board to guide the diocese in this ministry and provide support.”

He also offered a “word to my abuser and the Church:

“With God’s grace and mercy, I am trying to forgive you and love you. Only through forgiveness and love can healing really happen. … Hatred hurts the hater more than the hated. …

“And so one death I am dying is my anger towards the man who harmed me; and the Church that enabled him and other predator priests. I pray for all of you that you will end up reconciled with God and we may see each other again in heaven.”

“Put on then, as God’s chosen ones, holy and beloved, heartfelt compassion, kindness, humility, gentleness, and patience, bearing with one another and forgiving one another, if one has a grievance against another; as the Lord has forgiven you, so must you also do.”

Paden said he is not speaking to any counselor about his experience.

“The way that I’ve come to my perspective on things,” he said, “is I pray what’s called the Liturgy of the Hours” as a devotion.

“That exposes me to a lot of Psalms and a lot of other Scriptures,” he said, “and it’s given me a lot of fodder, if you will, to chew over and to give me a perspective on my experience.”

He and FitzGibbons were asked what will be different now that they have told their stories together.

“I have no idea,” FitzGibbons said. “Haven’t thought about it. I just trust the Spirit.”

“I’m open to whatever may come,” Paden said. “My hope and my prayer actually is I guess that this brings more of an impact [of] change on others who might be in a more challenging position … and that this shows them that there’s an alternate path … healthier and more comforting way to respond to abuse.”

The darkness doesn’t go away completely.

“But you live in Syracuse, you know?” Paden said. “It’s cloudy, right? The sun will come out, right? And it does.”

The news conference ended with applause.

Editor’s note: Syracuse Catholic Television was invited to attend the news conference; the video can be found at https://bit.ly/2lMNRmQ.