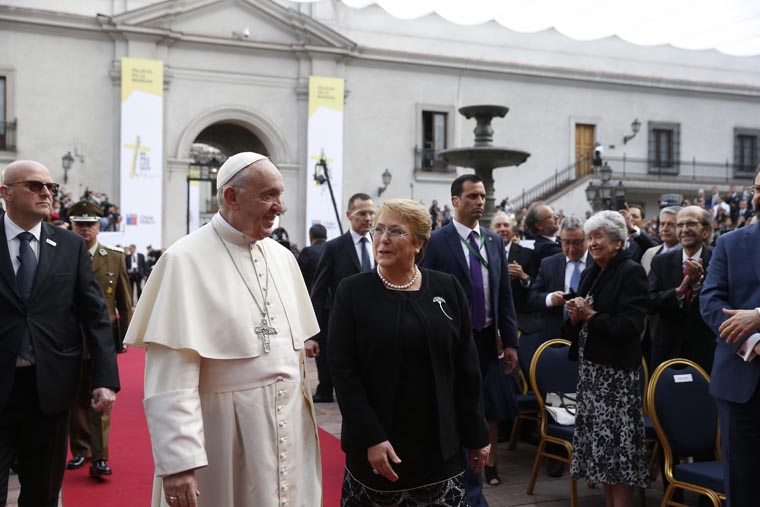 SANTIAGO, Chile (CNS) — Pope Francis, in his first formal speech in Chile, asked forgiveness from those who were sexually abused by priests.

Addressing government authorities and members of the country’s diplomatic corps Jan. 16, the pope expressed his “pain and shame at the irreparable damage caused to children by some ministers of the church.”

“I am one with my brother bishops, for it is right to ask for forgiveness and make every effort to support the victims, even as we commit ourselves to ensure that such things do not happen again,” he said.

Preparations for Pope Francis’ visit to Chile Jan. 15-18 were overshadowed by continuing controversy over the pope’s decision in 2015 to give a diocese to a bishop accused of turning a blind eye to the abuse perpetrated by a notorious priest.

The pope’s appointment of Bishop Juan Barros as head of the Diocese of Osorno sparked several protests — most notably at the bishop’s installation Mass — due to the bishop’s connection to Father Fernando Karadima, his former mentor. Father Karadima was sentenced to a life of prayer and penance by the Vatican after he was found guilty of sexually abusing boys.

The protests against the pope’s appointment of Bishop Barros gained steam when a video of Pope Francis defending the appointment was published in September 2015 by the Chilean news channel, Ahora Noticias. Filmed during a general audience a few months earlier, the video showed the pope telling a group of Chilean pilgrims that Catholics protesting the appointment were “judging a bishop without any proof.”

“Think with your head; don’t let yourself be led by all the lefties who are the ones that started all of this,” the pope said. “Yes, Osorno is suffering but for being foolish because it doesn’t open its heart to what God says and allows itself to be led by all this silliness that all those people say.”

Survivors of abuse and their supporters planned a conference and protests around the pope’s arrival.

But Pope Francis made his way to La Moneda, the presidential palace, and was welcomed by Chilean President Michelle Bachelet. Thousands were gathered in the square outside the palace, chanting “Francisco, amigo, Chile esta contigo” (“Francis, friend, Chile is with you”).

Despite the jovial atmosphere at outside La Moneda, there were serious signs of protest in Santiago.

Chilean media reported vandalism at Divine Providence Parish, not far from O’Higgins Park, where the pope was to celebrate Mass later in the morning. Vandals spray painted the words “complice” (“accomplice”) and “papa arde” (“burn, pope”) on the facade of the church below a banner welcoming Pope Francis.

Three days earlier, several Chilean churches were firebombed, and police found other, unexploded devices at two other churches in Santiago. Some of the pamphlets included the phrase, “The next bombs will be in your cassock” and spoke of the cause of the Mapuche indigenous group.

“How are you? Where you able to rest?” Bachelet asked the pope when he arrived at the palace. “Perfectly,” he responded. The two leaders stood as the national anthems of Chile and Vatican City State were played before entering the courtyard of the palace where about 700 members of the country’s government authorities and of the diplomatic corps welcomed the pope with a standing ovation.

In his speech to the country’s political leaders, Pope Francis emphasized the need for officials to listen to the people and to value their experiences, cultures, sufferings and hopes.

Included in the pope’s list were “children who look out on the world with eyes full of amazement and innocence and expect from us concrete answers for a dignified future.”

At that point he told the officials, “I feel bound to express my pain and shame at the irreparable damage caused to children by some ministers of the church.”

The pope’s acknowledgment of the crimes of sexual abuse committed by members of the clergy was met with a loud applause from the government authorities present.

Looking at the country’s social and political life, Pope Francis congratulated the nation for its steady growth in democracy since 1990 when the rule of Gen. Augusto Pinochet ended.

The recent presidential elections in November, he said, “were a demonstration of the solidity and civic maturity that you have achieved.”

“That was a particularly important moment, for it shaped your destiny as a people founded on freedom and law, one that has faced moments of turmoil, at times painful, yet succeeded in surmounting them. In this way, you have been able to consolidate and confirm the dream of your founding fathers,” the pope said.

Chilean President Michelle Bachelet is scheduled to hand the office over to President-elect Sebastian Pinera in March.

Chile’s future, Pope Francis said, depends on the ability of its people and leaders to listen to those in need and “replace narrow ideologies with a healthy concern for the common good.”

The unemployed, native peoples, migrants, the elderly, young people and children all deserve to be listened to while also giving “preferential attention to our common home.”

The wisdom of the country’s indigenous population, he added, can help Chilean society “transcend a merely consumerist view of life and to adopt a sage attitude to the future.”

“The wisdom of the native peoples can contribute greatly to this,” Pope Francis said. “From them we can learn that a people that turns its back on the land, and everything and everyone on it, will never experience real development.”