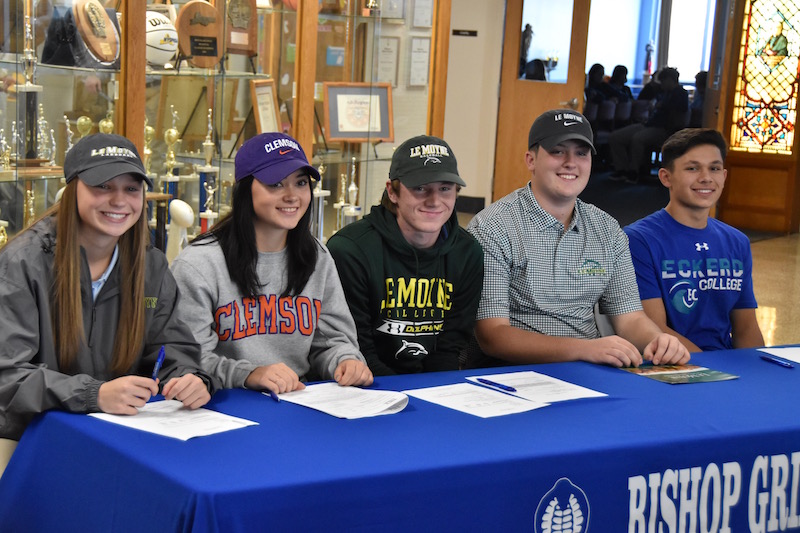 • Rhonee Shea Pal will play lacrosse for Le Moyne College in Syracuse. A member of the Grimes varsity lacrosse team since eighth grade, Pal has also been a member of the varsity soccer, cross country, and basketball teams. In her lacrosse career “she has been a top performer in all statistical categories — such a top performer that league coaches have nominated her for all-league status since eighth grade,” Athletic Director Edward Gray said.

• Sophia Hatton will play tennis for Clemson University in Clemson, S.C. A tennis player from a young age, Hatton has competed nationally on the senior and amateur tours and has been ranked as high as #10 overall in the Class of 2020. Hatton was also a section qualifier in track and broke the school record for the 1500m, Gray said.

• Matthew Tarby will play baseball for Le Moyne College. A member of the varsity baseball team since eighth grade, Tarby missed his tenth grade season due to injury. He returned to the diamond last spring as a “unanimous first team all-league selection and team MVP along with Joe [Wike],” Gray said. Tarby was also the goalie of this year’s sectional championship soccer team.

• Anthony Falgiatano will play golf for Le Moyne College. Participating on the golf team since seventh grade, Falgiatano set a program record of 32, has been a five-time all-league selection, and last year helped lead the team to a sectional championship. He also played basketball for the Cobras.

• Joe Wike will play baseball for Eckerd College in St. Petersburg, Fla. A member of the football, basketball, and baseball teams, Wike has been a member of the varsity baseball team since ninth grade. “A statistical leader both at the plate and on the mound for the Cobras, [Wike] has been an all-league selection every year, including team MVP last year,” Gray said.