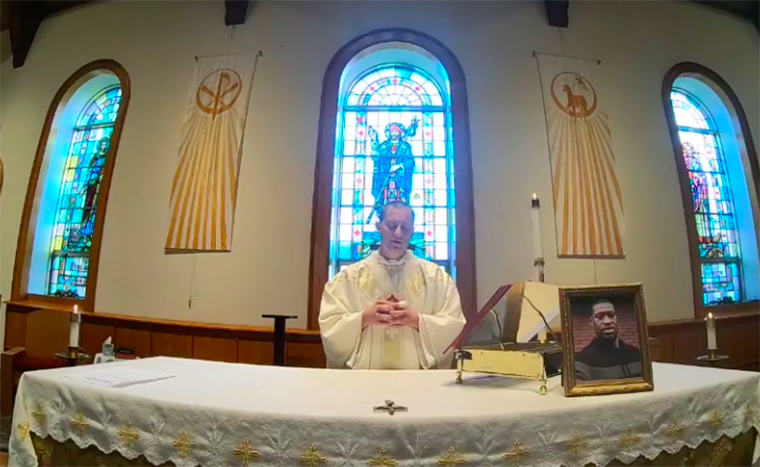 As huge demonstrations took place across the globe, the chorus of grief and outrage over George Floyd’s killing rang throughout Central New York.

“We should be horrified by what happened to George Floyd,” Father Christopher Ballard, pastor of Our Lady of Hope, said during a June 6 livestreamed memorial Mass honoring Floyd.

“We can’t change that it happened, unfortunately. We can certainly reform how we live, change our attitudes, work for peace, stand up for justice so that it doesn’t happen again.”

Floyd, an unarmed black man, died May 25 after a white Minneapolis police officer pinned him to the ground with a knee to his neck for nearly nine minutes. “I can’t breathe,” Floyd says in a widely viewed video of his last moments.

Floyd’s killing has spurred huge demonstrations honoring his memory and calling for an end to police brutality and racial inequality. Perhaps the biggest in the diocese took place June 6 in Syracuse. According to media reports, an estimated 2,000 people filled downtown streets for the “Fight Against Police Terror” rally, organized by the Syracuse chapter of Black Lives Matter in partnership with CuseYouthBLM and Raha Syracuse.

State and local officials reminded protesters that large gatherings could spread the coronavirus and urged participants to get tested for COVID-19. At a June 8 demonstration that drew at least 500 people in the village of Manlius, most participants wore masks.

Bishop Douglas J. Lucia, who pledged in his June 4 Catholic Sun column to spend the next year “working with others in eradicating the sin of racism and its inequity from our society,” attended the June 6 Syracuse rally. “The fear of dying because of the color of one’s skin, along with the loss of human dignity and civil rights, is a wake-up call to all men and women of goodwill,” he wrote last week.

At the rally, Bishop Lucia “participated by listening and hearing what was being said,” he said in a brief June 9 interview. “I understood better… the frustration people were feeling,” he said. “It helped to put me in touch with where people are at.”

The city of Syracuse closed streets leading into Columbus Circle ahead of the event. The Saturday vigil Mass at the Cathedral of the Immaculate Conception was canceled as a result.

Msgr. Neal Quartier, rector of the Cathedral, listened to “some wonderful inspiring talks” and chanted at the rally.

“I was inspired by the energy, enthusiasm, and youth of the peaceful and challenging demonstration and then march past the Cathedral,” he said.

Racism “is against everything that Jesus taught,” Msgr. Quartier said in a June 1 video reflection. Building on that reflection in his homily on Trinity Sunday, June 7, he said the Trinity demands that we listen to one another. “This is how violence ends, healing begins, and racism is rooted out,” he said.

Father Fred Daley, pastor of All Saints Church in Syracuse, was one of about 20 people from the parish community who attended the June 6 rally. In his homily for that weekend’s recorded Mass, Father Daley drew from a commentary by Father Bryan Massingale titled “The assumptions of white privilege and what we can do about it,” published in the National Catholic Reporter.

“It has never been easy to be black in America,” wrote Father Massingale, who spoke at Le Moyne College in October 2017. “Still, the past few months have pushed me to depths of outrage, pain and despondency that are unmatched in my 63 years of life.”

Father Massingale, who teaches at Fordham University, shared a litany of recent racist acts. He cited the disproportionate health and economic impacts of the COVID-19 pandemic on blacks, Latinos, and Native peoples. He also listed the killings of Ahmaud Arbery, Breonna Taylor, and Floyd — black Americans whose names have been invoked during recent protests.

“All of this weighs on my spirit. I try to pray, but inner quiet eludes me. I simply sit in silence on Pentecost weekend before a lit candle praying, ‘Come, Holy Spirit’ as tears fall,” Father Massingale wrote.

Given this list, “Why wouldn’t Father Massingale cry? Why wouldn’t all people of color cry? And why wouldn’t we all cry?” Father Daley asked.

The Sisters of St. Francis of the Neumann Communities released a statement condemning Floyd’s death. “As a community of more than 300 sisters, we acknowledge our role in institutional racism; we ask forgiveness of our sisters and brothers of color; we pray for our nation’s healing,” they wrote. “As we lament the death of George Floyd, we recommit ourselves today to work for an end to systemic racism and to advocate for social justice.”