Protests confront killing of George Floyd, ‘a sin that cries out to heaven for justice’ 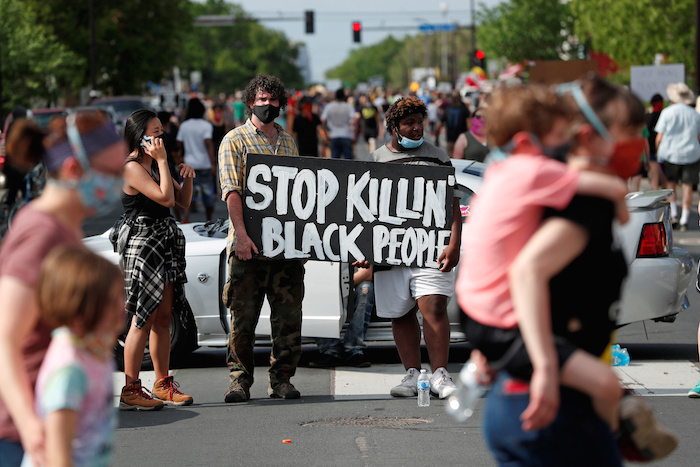 Protesters in Minneapolis gather at the scene May 27, 2020, where George Floyd, an unarmed black man, was pinned down by a police officer kneeling on his neck before later dying in a hospital May 25. (CNS photo | Eric Miller, Reuters)

Father Chris Celentano, pastor of St. Rose of Lima in North Syracuse, began his May 31 homily acknowledging the joy of worshiping together for the first time since public Masses were suspended March 16. But he shifted gears to address outrage over the death of an unarmed black man in Minneapolis police custody.

“I watched a man be killed on television and I haven’t been able to get it out of my mind,” he said to people in about 60 cars in the church’s parking lot. He was referring to George Floyd, a black man who died May 25 after a white Minneapolis police officer pinned him to the ground with a knee to his neck for nearly nine minutes. A widely viewed video shows Floyd repeatedly saying, “I can’t breathe.”

Anger at Floyd’s death has spurred protests in dozens of cities — including Binghamton, Syracuse, and Utica — over police brutality, the disproportionate health and economic burdens the coronavirus pandemic has unleashed in communities of color, and the country’s history of racism.

Bishop Douglas J. Lucia called the protests “expressions of sorrow and frustration” and “sadness at an unconscionable act that took the life of a young man in middle America despite the valiant attempt of other citizens to intervene.” Floyd’s death is “now embedded in our consciousness,” he said in a May 31 statement that cites God’s words in Genesis 4:10: “What have you done? Listen, your brother’s blood is crying out to me from the ground!”

At the heart of the incident “is a central teaching of God’s law of love that all life is sacred from conception to natural death; and that we are to love our neighbor as ourselves,” he wrote. “I ask that out of respect for one another no more property or businesses in this city and in Onondaga County be damaged, but instead we work peacefully together to support one another and put an end to injustice and racism.”

Archbishop José H. Gomez of Los Angeles, president of the U.S. Conference of Catholic Bishops, called Floyd’s death “senseless and brutal, a sin that cries out to heaven for justice,” in a May 31 statement. “How is it possible that in America, a black man’s life can be taken from him while calls for help are not answered, and his killing is recorded as it happens?”

Archbishop Gomez said he “shares the outrage” of protesters across the country. “We should all understand that the protests we are seeing in our cities reflect the justified frustration and anger of millions of our brothers and sisters who even today experience humiliation, indignity, and unequal opportunity only because of their race or the color of their skin,” he said. “It should not be this way in America. Racism has been tolerated for far too long in our way of life.”

The violence and destruction of some protesters is self-destructive, the archbishop said. “We should honor the sacrifice of his life by removing racism and hate from our hearts and renewing our commitment to fulfill our nation’s sacred promise — to be a beloved community of life, liberty, and equality for all.”

On a second day of local protests, a small group gathered early afternoon May 31 at Syracuse’s Columbus Circle, near the Cathedral of the Immaculate Conception. Protesters were later outside the Onondaga County Public Safety Building, where windows were broken the night before. “No peace, no justice,” people chanted in a video posted by CNY Central TV. Protesters also stood outside Syracuse city hall.

Hundreds protested in Utica, Spectrum News reported. “Say his name,” they chanted. “George Floyd,” others responded. About 200 people protested in Oswego, according to news accounts.

“My commitment is firm to strengthen and improve police community relations and ensure equitable law enforcement in the City of Syracuse,” Walsh said in a statement. “We can emerge from this national crisis stronger than ever.”

Gov. Andrew Cuomo put New York’s National Guard on standby, he said during a briefing. The state’s attorney general will review complaints of police brutality during the protests, he added.

Cuomo said violent protests do not help. “The real issue is the continuing racism in this country, and it is chronic and it is endemic, and it is institutional,” he added. “We still discriminate on the basis of color of skin. That is the simple, painful truth.”

Ahead of some of the country’s worst civil unrest since the 1960s, U.S. Catholic bishops said Floyd’s death called for “a spirit of determined conversion” about racism in the United States.

“Racism is not a thing of the past or simply a throwaway political issue to be bandied about when convenient,” several bishops said in a May 29 statement. “It is a real and present danger that must be met head on.”

Chairmen of seven U.S. Conference of Catholic Bishops committees said in their statement they “are broken-hearted, sickened and outraged to watch another video of an African American man being killed before our very eyes.”

“What’s more astounding is that this is happening within mere weeks of several other such occurrences. This is the latest wake-up call that needs to be answered by each of us in a spirit of determined conversion,” they said.

Religious leaders noted the links among the public health crisis, the economic stress caused by business closures, and racial injustice. Syracuse Bishop Douglas J. Lucia alluded to in petitions he asked priests to include in their Masses this weekend.

Among them: “For a Spirit of unity: that God will destroy all the divisions that separate the human family and restore our ability to work together in promoting the sanctity of life and against  racism, injustice, and disease, we pray to the Lord.”

In his homily during morning Mass at the Cathedral, the bishop shared the words of Bishop Michael B. Curry, presiding bishop of the Episcopal Church, from a May 31 op-ed in the Washington Post.

“Love does not look like the harm being caused by some police or some protesters in our cities. Violence against any person is violence against a child of God, created in God’s image,” the bishop read. “And that ultimately is violence against God, which is blasphemy — the denial of the God whose love is the root of genuine justice and true human dignity and equality.”

The Justice and Peace Committee of St. Lucy’s Church in Syracuse said in a May 31 letter to the editor “the pervasive American sin of racism has once again been uncovered during this pandemic, as people of color have been overrepresented as victims of the virus,” Corinne Driscoll wrote for the committee. “And that racism is blatantly manifesting itself, as well, in the killing, not only of George Floyd, but of Ahmaud Arbery, Breonna Taylor, and many other innocent African Americans.”

The committee commits “once again to prayer, examination of conscience, repentance, and effective action with all people of good will in combatting this never-ending and pervasive evil, highlighted now in the dual pains of this moment of pandemic and racial discrimination,” she wrote.

The Sisters of St. Francis of the Neumann Communities said they were “deeply troubled” by Floyd’s death and, along with other members of the Leadership Conference of Women Religious, have “taken a stand against the evil of racism. This tragedy reminds us again of the need to cleanse our hearts and rid our land of this evil.”

A statement from Le Moyne College leaders cited the late Martin Luther King Jr.’s words: “a riot is the language of the unheard.” King “understood that the violence that rocked the nation in the late 1960s was the eruption of long-simmering pain and anguish,” they wrote. “While a particular event may be the spark that sets the tinder ablaze, the tinder had been piling up for decades through economic discrimination, daily insults, and continuing injustice.”

The Le Moyne statement cited the preferential option for the underrepresented. “We need to listen carefully to the voices of those who are oppressed and not rely solely on the voices of those with access to mass media and we need to allow what we hear to shape our understanding of the world. People are speaking; let those who have ears to hear listen,” they wrote.

The bishops made a similar point. “While it is expected that we will plead for peaceful nonviolent protests, and we certainly do, we also stand in passionate support of communities that are understandably outraged,” they wrote. “Too many communities around this country feel their voices are not being heard, their complaints about racist treatment are unheeded, and we are not doing enough to point out that this deadly treatment is antithetical to the Gospel of Life.”