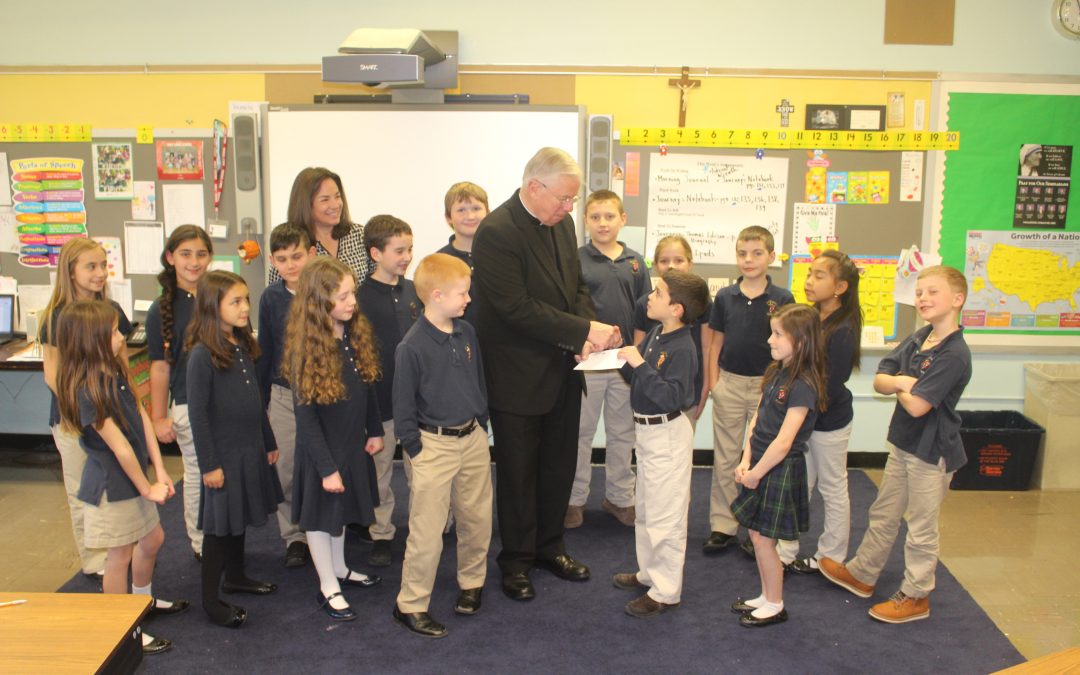 MaryJo DiMento’s third grade class at Holy Cross School in DeWitt has contributed $51.18 to the restoration of the Cathedral of the Immaculate Conception.

Students got the idea after DiMento showed them a video about the restoration. The restoration video showed the students the spiritual and historic value that the Cathedral holds for the Diocese of Syracuse and that it is a major structure in the city of Syracuse. They learned about how the structure of the Cathedral has deteriorated over nearly 150 years. The Cathedral is in desperate need of a new roof and many basic structural repairs. The children recognized their pastor, Msgr. J. Robert Yeazel, on the video. After they viewed the video the students asked the question, “How can we help?” They decided to donate any money that they had at home, in piggy banks, and loose change that they might find.

The children were truly enthusiastic about being a part of the restoration of the Cathedral. One of the students, Dominic Vitale, told DiMento that he asked his mother, and they went together to Sunday Mass at the Cathedral. Helen Lam told the class that she had been to the Cathedral with her grandmother. On November 28, the third grade students presented their donation to Msgr. Yeazel, and he was moved by their concern and generosity. He explained to the children that $18 million dollars is needed to complete the work. He told them that everyone’s contribution is so important and that is why he was so grateful for their donation.

DiMento and her class plan to take a field trip to the Cathedral in the spring to see for themselves how their contribution helped to make the Cathedral, our Mother Church, a beautiful, restored facility in which to worship.