Hope and heartbreak in Haiti

Last Tuesday evening, Dieunel Pierre was having one of his usual telephone conversations with his cousin Jomone. 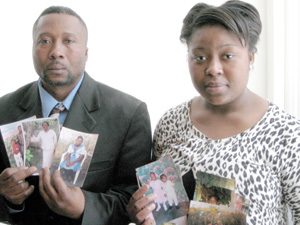 That’s the last Dieunel has heard from Jomone and many of the family members he loves and supports back in his home country.

On Tuesday, Jan. 12, Haiti was devastated by a magnitude 7 earthquake that reduced its capitol city to dust and rubble.

Photos of dust-covered limbs amid piles of cinderblocks and buildings collapsed in heaps have filled newspapers and television broadcasts from the devastated country.

“I know my family is down there. I can hear my family,” Dieunel said.

He and his 19-year-old daughter Daniella spent the day after the earthquake speaking with the media, hoping to draw as much support as possible to help pay for Dieunel to fly back to find his family.

But although he had dressed in a suit for the cameras, Dieunel’s eyes looked tired. He had spent the entire night before watching CNN and searching for more news on the Internet.

The news he was able to find wasn’t good.

“It’s so scary for me. I know Port-au-Prince very well. I’ve seen [pictures of] where they lived, and it’s nothing. There’s nothing there,” Dieunel said.

His family lives in neighborhoods that have been most affected by the earthquake, neighborhoods like Carrefour and Pétion-Ville (see the map on page 6 that accompanies this story).

Finally, Dieunel was able to hear from his sister in Florida that one sister and one nephew had been found. They have broken arms and legs, but they are alive.

Dieunel came to America in 1994. He sends money and clothes to help his family, and he said he had planned to help send his nieces and nephews to college and maybe even to come to America.

“My sister, she’s got four beautiful kids,” he said, tapping one of their photos. “I knew one day they will be coming and now,” he shrugged.

“My heart is broken. That’s why I want to go down there and see what I have left,” he said.

He was able to get enough money to pay for a ticket to travel down on Tuesday, Jan. 19.

“I know they lost everything and I hope I’ll see my family survive it,” he said. “Whatever happened, I want the opportunity to take care of them.”

Daniella is a student at Onondaga Community College. She’s never been back to Haiti, but had been looking forward to going soon to see the places she had heard of and to meet the family members she had spent her lifetime talking to on the telephone.

Dieunel shook his head. “My kids won’t see my family,” he said. “I want my dream to come true.”

Daniella said she’s trying to be hopeful and to keep her parents’ spirits up. “It’s hard to see my parents worry, and I try to tell them, ‘Don’t worry, just try to hope.’”

But she said she doesn’t know herself yet how to feel about never seeing the city of Port-au-Prince in the way her father and mother did.

Bob Hood, a parishioner of St. James Parish in Cazenovia, has traveled to Haiti over 30 times to carry out missionary work there. Hood said Port-au-Prince was a city developed to hold about 150,000 people that was instead straining under the pressure of a population closer to 2.4 million.

“You have to walk sideways on the streets just to get by all the people,” Hood said. And he said many of the houses people lived in were barely standing on a normal day. “I mean with a baseball bat you could literally knock the walls down.”

He said he was in the process of chartering a plane to take him to Cap-Haïtien, a city located in the north of Haiti. He said he will find a way to travel from there to the village of Thibeau. St. Ives Parish in Thibeau is twinned with St. James in Cazenovia, and Hood has many good friends there.

“If I’m just going to be in the way, I know enough to get out of the way,” Hood said, “And I don’t have any delusions of going in and lifting rubble off people.”

Instead, he said, he wanted to be there to pray with the people he knows and to be in solidarity with the Haitian community he has come to love.

“I know what it’s like to lose people. And when people show up and show that they care about you and your loss as much as they would care about their own loss, it matters,” Hood said.

Even though Thibeau wasn’t as affected by the earthquake, Hood said he is traveling with the expectation of having to start many established projects from the ground up. He said he was foregoing clothing in his suitcases to save room for chlorine tablets to help restore a compromised water system.

He urges parishes in the Syracuse Diocese to consider twinning with parishes in Haiti. It is, he said, the most efficient and effective way of bringing aid to people who need it.

While the Red Cross does extraordinary work, Hood said they still have overhead charges of 20 to 30 percent. Twinning with another parish means that two or three representatives from a parish here will bring the aid directly to those who need it there.

“The Haitians have a saying, ‘What the eye can see, the heart can understand.’ But once the eye sees and the heart understands, you develop the desire to help,” Hood said. “I’ve developed a Haitian heart.”

Even before the earthquake, Hood said, there were three-story tall piles of trash by the streets. “And you’ll see women and children and dogs and goats and pigs rooting through trying to find something to eat.”

He said he’s prepared himself to see even more devastation during this next trip.

“In my heart of hearts,” Hood said, “I believe that God will use this tragedy to help the Haitian people, because now the rest of the world will begin to understand the unconscionable poverty that exists 90 minutes away from the wealthiest country in the world.”