Laity around the diocese keep Respect Life cause going

This year the Right to Life movement anticipates the 37th anniversary of Roe v. Wade, the Supreme 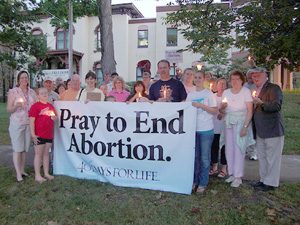 Court case that legalized abortion in 1973. The date galvanizes the people who work together to promote a deeper respect for the dignity of human life at every stage, especially the unborn. People of all ages take time out of their busy schedules to participate in marches, seal envelopes, deliver flyers, make phone calls, organize rallies, pray the rosary outside Planned Parenthood offices — and most significant of all, pray unceasingly for the end of abortion. Their dedication is tireless but even they admit their numbers fluctuate. The work can be frustrating.

Maribeth Cederborg is a parishioner of Most Holy Rosary in Maine, N.Y. in the Southern Tier. A cradle Catholic, Cederborg decided a year ago that “now” was the time to get involved. She looked around her community trying to find a bus group heading to Washington, D.C. for the annual March for Life. Cederborg didn’t have much luck and finally connected with a Syracuse bus and was all set to go but became ill and had to miss the trip.

“I watched the Mass from my bed and I heard Cardinal Regali speak about the FOCA campaign, so I helped with that,” Cederborg said. FOCA, or Freedom of Choice Act, would have lifted states’ restrictions on abortion and the U.S. Catholic Church launched a successful education campaign against FOCA.

“Priests in all our parishes have even less time for these issues now,” Cederborg said. “There are mergers, linkages and closings to deal with and it takes time away from issues like Respect Life.”

Cederborg even drove to Albany for Public Policy day last March and delivered the FOCA cards and petitions in person. She’s still on fire with a willingness to help and says she’s just not sure exactly what it is God is calling her to do but she knows she’s being called.

“I’m just going to roll up my sleeves and dive in,” Cederborg said. “That’s what I’m doing right now.”

Her gifts lie in organizational skills. Cederborg works as a word processor at a large law firm so she is used to detailed work and is pretty efficient when it comes to Internet research and design.

“He calls on you and you figure out where you talents can be used,” Cederborg said. “My talents are more along the lines of organization. I’ve wondered to myself how that could make a difference but I can make calls, create a web page, go to an office and help organize it. I’ll fight this fight on whatever front I can fight it on.”

Cederborg has a son and a daughter both in their early 30s and she spent more than a decade as a single mom. Then she met her second husband, Rick, and they have a six year old daughter.

“She was a welcome surprise,” Cederborg said.

Her husband retired after 35 years of working for a local grocery company and he is able to be at home for their daughter. “He’s a great guy,” Cederborg said. “I kept thinking when is a good time to get involved [with the Respect Life movement] and then I thought, ‘Now is a good time.’”

Cederborg is thrilled to be able to make the trip to Washington, D.C. for this year’s March for Life. She’ll be taking four young
people to Washington through the diocesan Office of Youth Ministry. Cederborg said she’s getting involved with the young people because she wants a good youth ministry program available for when her daughter is old enough to participate.

Abortion is a topic that pushes buttons in many people and it can divide and cause tension. It can also bring people together and help them search for common ground.

Cederborg said that part of the reason why she feels compelled to help with the Right to Life movement is because it is a perfect example of living out her faith. She’s been called “Thumper” by her brother because he feels she can be a bit of a “Bible thumper,” Cederborg said, “We know we’ll win this because we follow Jesus Christ. He already won this for us but we still have to bring the kingdom of God here.”

With the trip to Washington in the near future, Cederborg anticipates coming home with a new-found purpose.

“Now I’m going to the March for Life in Washington and I’ll be able to tell folks about it,” she said. “I expect to be on fire when I come back.”

She said it can be frustrating when she runs into Respect Life groups with antiquated web sites and mailing lists from 10 years ago but Cederborg said maybe that’s why she is in this, to help get the ball rolling. She has found a place to serve and a cause she can fight for even if it’s with a keyboard and a few dollars in gas.

There are other workers in the pro-life arena who were born into the work. Julianne Stokes, a parishioner at St. Paul’s in Rome, grew up with parents who were active in their community. They took in pregnant young women and helped them through the pregnancy.

“When I was 13 and going to a Catholic high school we took a trip to the March for Life,” Stokes said. “Both my parents were involved in New Jersey where they lived.”

Today, Stokes is Respect Life coordinator for her parish where they pray the rosary at 9:30 a.m. every Wednesday and Saturday to offer prayer support to the Respect Life cause. She volunteers four hours a week at Care Net, a counseling center for women who are pregnant. Stokes said they offer peer counseling. “We try to listen with compassion to their situation,” she said. “Then we can refer them to PCAP, WIC and offer them other resources to support them throughout their pregnancy.”

Stokes has also worked with Project Rachel, a diocesan organization that helps women who have experienced an abortion.

“One out of every three of us have a connection with someone who has experience with abortion,” Stokes said. “Seventy percent of women who have had an abortion say that they were forced to have one, or that they had no other option. That’s not a choice at all. They need somebody there to tell them what the options are and to help them find their own strength.”

Stokes said that women who are considering abortion and those who have already had one need help. “They need support,” she said. “We need to encourage the whole community to realize that this affects them. Post-abortion experience can lead to ramifications that affect the whole family. We have to realize the centrality of this issue. We have to care about every single person.”

Stokes’ parish extends its Respect Life ministry to include those who have been impacted by the economic downturn. “A year ago we began a ministry to reach out to the jobless in our area because the economic impact of this affects families. We had a Wednesday morning club and we prayed for those who were unemployed,” Stokes explained.

She said a prayer ministry is needed to support people who are struggling and that includes families and women who are considering or might have already had an abortion.

“As Catholics we’re very lucky,” Stokes said. “We have our parishes there all the time. Once a crisis is over, you still have the parish there to support you with fellowship and resources.”

Parishes are made up of people who work every day to feed the hungry, clothe the naked, visit those in prison and help everyone else to remember that respecting life also means respecting the unborn.

Jeannie Owens, a parishioner of Holy Family Church in Fairmount, is gearing
up for the second annual 40 Days for Life event. She heard about the program when she attended the Sacred Heart Conference held in Syracuse a couple of years ago.

“I’m a mom of six and this issue has been in my heart for a long time,” Owens said. “I used to go on the bishop’s marches from Planned Parenthood and I think the power of prayer and fasting is so incredible.”

The program means that there will be a constant prayer vigil outside Planned Parenthood on Genesee Street in Syracuse from 7 a.m. to 7 p.m. all 40 days of Lent. The event begins on Ash Wednesday, Feb. 17 this year. Owens and a friend, Shannon Guy, brought the program to the Syracuse area.

Owens is no stranger to prayer vigils. She said she sometimes brings her four year old when she prays outside Planned Parenthood. Sometimes her prayers make a difference. Owens described one evening this past fall.

“A woman came up and she saw the signs with Scriptures and she looked at the picture of the fetus and she said, ‘That’s what my baby looks like.’ And I know she was thinking, ‘Could God really love me through all of this?’ Sometimes I just ask, ‘Can I help you?’ and I offer them an alternative and tell them there are people who will help them. They might be looking for a sign to help them figure out what to do,” Stokes explained.

This may be the year others want to take some time to help with a cause. “You cannot respect life without respecting the baby in the womb,” Julianne Stokes said.

Checking out the web site, www.40daysforlife.com would be a good first step.