Appeal kickoff starts off season of giving for the diocese 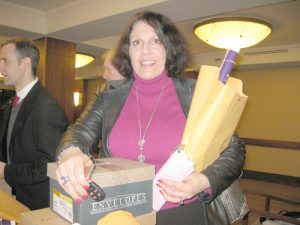 LIVERPOOL — The economy is in the forefront of the news these days, and rarely is that news positive. But somehow the Syracuse Diocese has managed to keep giving. The HOPE Appeal is the annual fundraising campaign prepared and undertaken each year in order to keep so many ministries within the diocese viable, including The Catholic SUN. What is perhaps even more important to the people in the pews is that 50 percent of whatever a parish gives above and beyond its assigned goal, goes back to the parish.

Parish representatives and pastors gathered with other diocesan staff and administrators for a well-attended HOPE Appeal kickoff event held March 2 for the Western and Northern Regions of the diocese at the Holiday Inn in Liverpool.

Bishop Robert Cunningham was there to show his support for the annual campaign. The kickoff events were held in early March for all the regions of the diocese.

Regional gatherings offer the opportunity to thank and recognize donors and parishes for their support. The past year’s goal and results are discussed and the plans for the coming year are put in place. The goal for this year’s HOPE Appeal is $4,150,000, the same as last year. The 2009 campaign raised $4,360,000 during what could also be considered a weak economic climate.

Diocesan programs such as Catholic Charities, youth ministry, vocation promotion, faith formation, the Spanish Apostolate, Catholic schools and others receive assistance from the HOPE Appeal. There is a DVD available that explains the work of some of the ministries supported by the HOPE Appeal. It is recommended that parishes show the video to parishioners to give them a clearer understanding of the significance of the HOPE Appeal’s contribution to the work and mission of the diocese.

Theresa Harris was at the March 2 kickoff to pick up the posters, a DVD and paperwork prepared each year by the Office of Stewardship and Development. She promotes the appeal in her parish, Sacred Heart in Cicero. Harris said supporting the HOPE Appeal is not a challenge for her because she feels people are comfortable giving when they know where their money is going.

“They know this money stays here and they know the programs it goes to,” Harris said.

Her parish made approximately 140 percent of its goal for 2009, meaning they went beyond the amount they were assigned to give. There were nearly 100 parishes across the diocese which made at least 100 percent of their goal for the 2009 HOPE Appeal campaign.

Christopher (Kit) Parker is the director of the diocesan Office of Stewardship and Development which oversees the HOPE Appeal. He said that even during difficult financial times, people in the faith community feel good about giving to an appeal connected with their church.

“Even if the economy faces a downturn and charitable donations are less, donating to one’s faith community or church may not be the first place a family makes a sacrifice,“ Parker said. “The people of the diocese are very generous and they are willing to give even when it is difficult.”

The goal for the 2010 HOPE Appeal is $4,150,000 and Parker is confident that just like last year, the diocese will meet its goal. Last year marked the sixth year in a row where the money received exceeded the actual diocesan goal.

“The 2009 campaign was conducted during a ‘down’ economy and was very successful thanks to the generosity of our parishioners and the leadership of our pastors,” Parker said. “We have no reason to think otherwise about the 2010 campaign — that same spirit of generosity and leadership is already evident.”

The campaign officially begins in May with HOPE Appeal weekend on May 15-16. Parishes have some flexibility regarding when to announce the campaign so some parishioners may begin to hear about it in early April, Parker explained. A phase of the campaign takes place in April and is targeted at leadership donors, he said.

Parishioners can expect to hear about the Appeal from their parish leaders soon as the campaign begins to get underway. Parishes have until the following February to turn in all pledges. For more information about the HOPE Appeal, call (315) 472-0203 or 1-800-295-4776.