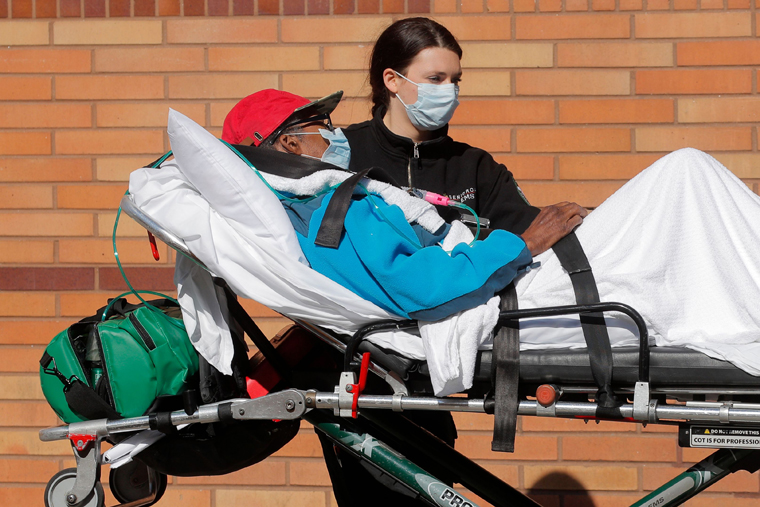 BALTIMORE (CNS) — In a virtual meeting with Baltimore priests, a top Maryland physician briefed them on the characteristics of the coronavirus, including how it’s transmitted, and he also urged them to take care of their mental health as they help their parishioners through this pandemic.

Addressing the priests was Dr. Thomas Smyth, president and CEO of University of Maryland St. Joseph Medical Center in Towson, near Baltimore.

Keeping a distance of 6 feet or more from other people and adhering to stay-at-home policies are critical to “flattening the curve” in the spread of the coronavirus and in preventing medical facilities from being overwhelmed with critically ill patients.

Speaking to more than 50 priests of the Archdiocese of Baltimore during a March 31 online presentation, Smyth pointed out that most COVID-19 patients exhibit no symptoms in the first two to five days after they are infected. That’s when the risk of spreading the virus is greatest, he said.

“This is what’s causing so much consternation,” Smyth said. “You don’t immediately get a cough or a fever. You spend a few days walking around thinking you’re fine, interacting with people.”

Smyth noted the coronavirus attacks cells in the respiratory system. When symptoms are present, they typically include a runny nose, cough, sore throat and high temperature.

The virus is transmitted between humans in droplets from coughing, sneezing and touching or shaking hands. It enters through the nose and mouth and then finds a host cell in the respiratory system. The host cell then bursts and other nearby cells in the body are infected, Smyth said.

While most people infected with the virus suffer mild symptoms not unlike a cold, some victims can die from complications including pneumonia.

The virus can cause swelling in the respiratory system, which, Smyth said, can make it difficult for the lungs to pass oxygen into the bloodstream, leading to organ failure and death.

Smyth called it “critically important” to wash hands for at least 20 seconds at a time to help prevent infection.
“The Lord’s Prayer takes 20 seconds to pray,” he said. “You can use that as a guide for your parishioners to wash their hands.”

“The largest concentration is around the Washington, D.C., area, which is not surprising, given that Washington is a more international city,” he said.

In answering several questions from priests at the end of his presentation, Smyth noted that there is no evidence the virus is airborne. Asked about how long the virus can live on surfaces, Smyth said data shows it can survive for 24 to 36 hours at most.

“If you picked up something at the grocery store, I’d still wipe it (with a disinfectant) when you get home,” he said.
If a priest gets the virus, Smyth said he should contact medical professionals and go into quarantine for 14 days and then at least three to five more days after the last coughing episode.

Smyth said many hospitals, including his own, provide masks, shields and other protective equipment for priests who need to administer the anointing of the sick to dying patients.

In the Archdiocese of Baltimore, Archbishop William E. Lori announced March 30 that sacraments such as reconciliation and the anointing of the sick may only be administered to those whose death is imminent.

In urging the priests to take care of their own mental health, Smyth shared a spiritual reflection from Father Joseph Muth, pastor of St. Matthew in Baltimore, which noted that throughout the Bible, angels appeared at extraordinary times to encourage people not to be afraid. Father Muth noted that priests now have a chance to be an angel for someone else and tell them not to be afraid.

“I know you all are working hard with your parishioners to do the same thing,” Smyth said, “to help them get through this very difficult time.