How is a Catholic bishop appointed?

The appointment of bishops in the Catholic Church is a complicated process. The ultimate decision rests with the pope, and he is free to select anyone he chooses. But how does he know whom to select? 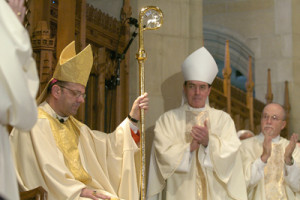 The process for selecting candidates for the episcopacy normally begins at the diocesan level and works its way through a series of consultations until it reaches Rome. It is a process bound by strict confidentiality and involves a number of important people — the most influential being the apostolic nuncio, the Congregation for Bishops and the pope. The apostolic nuncio is the pope’s representative to both the government and to the hierarchy of a given nation, a key person in deciding what names are recommended to the Congregation for Bishops for possible episcopal appointment. The Congregation for Bishops is a department of the Roman Curia, headed by a cardinal. The head of the congregation is called the “prefect,” and its membership consists of approximately 35 cardinals and archbishops from around the world.

The four-stage process of selecting candidates can be time consuming. The first stage of the process involves bishops’ recommendations. Every bishop may submit to the archdiocese of his province the names of priests he thinks would make good bishops. Prior to the regular province meeting (usually annually), the archbishop distributes to all the bishops of the province the names and curricula vitae of priests which have been submitted to him. Following a discussion among the bishops at the province meeting, a vote is taken on which names to recommend. The vote tally, together with the minutes of the meeting, is then forwarded by the archbishop to the apostolic nuncio in Washington. The list is also submitted to the United States Conference of Catholic Bishops (USCCB).

A candidate for the episcopal ministry must be at least 35 years old, five years in the priesthood and “outstanding for his solid faith, good morals, piety, zeal for souls, wisdom, prudence and human virtues and endowed with the other talents which make him fit to fulfill the office” (Canon 378, para. 1).

He must hold firmly to the orthodox faith, having a devotion to the Apostolic See and be faithful to the magisterium (teaching authority) of the church. Together with these attributes of character and spirituality, he must have a thorough knowledge of dogmatic and moral theology and canon law. Also required are an aptitude for governing, a social sense and an openness to the signs of the times.

The second stage of the selection process involves the apostolic nuncio gathering facts and information about potential candidates and interpreting that information for the congregation. The nuncio conducts an investigation into the suitability of the candidates. A report is requested from the current bishop or the administrator of a diocese on the conditions and needs of the diocese. If the appointment is a replacement for a diocesan bishop or archbishop about to retire, consideration will be given to the incumbents’ recommendations. Broad consultation within the diocese is encouraged with regard to the needs of the diocese, but not the names of candidates. The report is to include the names of individuals in the diocese with whom the nuncio might consult and how to contact them. Previous bishops of the diocese are consulted as well as bishops of the province. The president and vice president of the USCCB are also consulted. If the vacancy to be filled is an archdiocese, other archbishops in the U.S. may be consulted.

At this point, the nuncio narrows his list and a questionnaire is sent to 20 or 30 people who know each of the candidates for their input. All material is collected and reviewed by the nuncio and a report  (approximately 20 pages) is prepared. Three candidates are listed alphabetically — the terna — with the nuncio’s preference noted. All materials are then forwarded to the Congregation for Bishops in Rome.

A diocesan bishop must justify to the apostolic nuncio his need for an auxiliary bishop. This is easier if he is requesting a replacement  for a retired or deceased auxiliary. The diocesan bishop prepares the terna, or list of three candidates, for his requested auxiliary and forwards it to the apostolic nuncio. The nuncio then conducts his own investigation of the priests on the diocesan bishop’s terna, sending the names to Rome with a report and his own recommendations. Great weight is given to the nuncio’s recommendations, but his recommendations are not always followed. On average, this part of the process may take two to six months.

Once the documentation from the nuncio is complete and in order, and the prefect approves, the process moves forward to stage three.  If the appointment involves a bishop who is being promoted or transferred, the matter may be handled by the prefect and the staff. If, however, the appointment is of a priest to the episcopacy, the full Congregation is ordinarily involved.
A cardinal relator is chosen to summarize the documentation and make a report to the full congregation, which generally meets twice a month on Thursdays. After hearing the cardinal relator’s report, the congregation discusses the appointment and then votes. The Congregation may follow the recommendation of the nuncio, choose another of the candidates on the terna, or even ask that another terna be prepared.

At the fourth and final stage of the process, the prefect of the Congregation for Bishops presents the recommendations of the Congregation to the Holy Father at a private meeting with the pope.  A few days later, the pope informs the Congregation of his decision. The Congregation then notifies the nuncio, who in turn contacts the candidate and asks if he will accept. If the answer is “yes,” the Vatican is notified and a date is set for the announcement.
It often takes six to eight months — and sometimes longer — from the time a diocese becomes vacant until a new bishop is appointed.