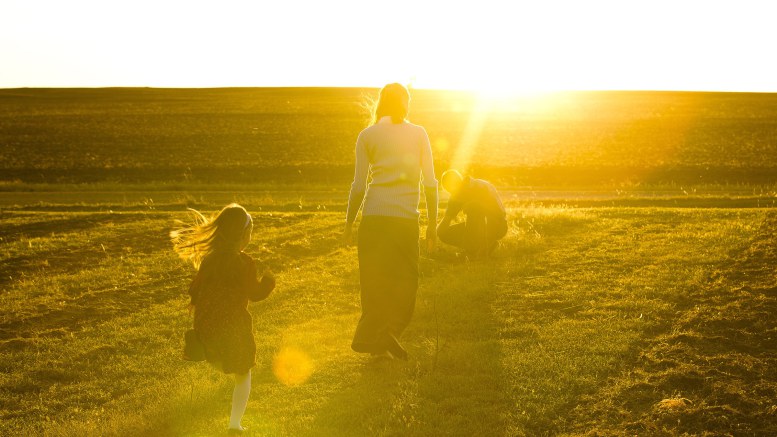 In this 2013 file photo, a family is seen on their family farm in St. Leo, Kan. (CNS photo | Tyler Orsburn)

WASHINGTON (CNS) — Fifty years ago, an encyclical was released affirming a long-held teaching of the Catholic Church, yet it became one of the most controversial encyclicals in recent church history.
Blessed Paul VI’s encyclical “Humanae Vitae” (“Of Human Life”), subtitled “On the Regulation of Birth,” reaffirmed the church’s moral teaching on the sanctity of life, married love, the procreative and unitive nature of conjugal relations, responsible parenthood and its rejection of artificial contraception.

At the time of its release, it was greeted with protests and petitions. But the 50th anniversary has been marked by conferences, lectures and academic discussions as theologians, clergy, family life ministers and university professors have explored what its teachings mean for the 21st-century church.

Blessed Paul issued “Humanae Vitae” as artificial contraception, particularly the birth control pill, began to become commonplace. In the United States, the Food and Drug Administration approved the use of Enovid — the pill — in May 1960 after tests on nearly 900 women through more than 10,000 fertility cycles showed no significant side effects.

Initially, many thought the pope might support the use of artificial contraception, especially after a majority of members on a papal commission studying the issue approved a draft document in 1966 endorsing the principle of freedom for Catholic couples to decide for themselves about the means of regulating births.

The document proposed that artificial birth control was not intrinsically evil and said under specific circumstances, Catholic couples could use contraceptives in good conscience. It was supported by 64 of the 69 commission members who voted on it, including nine of its 16 episcopal members.

The document was intended for the pope only, but it was leaked to the press, which heightened expectations of a major change in church teaching.

Blessed Paul rejected the majority’s recommendations and, instead, decided to uphold traditional church teaching on artificial contraception. The text of the document thanked the commission experts but added that the pope thought its proposed solutions “departed from the moral teaching on marriage proposed with constant firmness by the teaching authority of the church.”

Opposition to the encyclical erupted throughout the church after the document’s release. Some clergy in the U.S. and Europe openly voiced disagreement and thousands of lifelong Catholics left the church.

Among the most prominent opponents were 87 teaching theologians from American seminaries and Catholic universities. They responded with their own statement, arguing that because the encyclical was not an infallible teaching, married couples in good conscience could use artificial contraception and remain faithful Catholics.

Father Charles E. Curran, then an associate professor of theology at The Catholic University of America, was one of the most visible U.S. leaders of the group who opposed the teaching.

An attempt by Catholic University officials in spring 1967 to dismiss Father Curran for his stance that Catholics could dissent from the church’s noninfallible teaching that contraception was morally wrong resulted in a student strike. The priest was reinstated quickly, ending the strike.

In 1986, the Vatican declared Father Curran unfit to teach Catholic theology because of his dissent from certain church teachings and he was eventually removed from his position at Catholic University.

Father Curran, currently the Elizabeth Scurlock university professor of human values at Southern Methodist University in Dallas, said that while “Humanae Vitae” upholds traditional church teaching, for decades the use of artificial contraception among Catholic couples has been similar to that of non-Catholic couples without church consequences.

“From my prejudiced perspective, the present situation proves that the Catholic Church accepts dissent,” Father Curran said recently. “It’s not infallible teaching,” he said of “Humanae Vitae.” “Everybody knows that contraception (practice) is about the same for Catholics and non-Catholics.”

Despite the outcome, Father Curran said the existing “gap between the teaching of the church and the practice of the faithful” is not a good situation because it has led to widespread loss of credibility for church teaching.

“In a sense it (the encyclical) is even more important today especially because if the Catholic Church cannot engage on contraception it is never going to engage in any other sexual issue or any other issue, such as the role of women in the church,” Father Curran said.

For defenders of “Humanae Vitae,” however, the enduring relevance of the encyclical is a testament to the truth of its message. While it is not infallible teaching, it is still the official doctrine of the church, requiring assent by all Catholics unless it is modified.

“Perhaps the most surprising thing about the encyclical … is how reports of its imminent death were continually exaggerated,” wrote Helen Alvare recently for Catholic News Service’s Faith Alive! religious education series.

The law professor and pro-life advocate attributes this to the flaws of the birth control revolution and to a deeper appreciation of the “Humanae Vitae” message.

“Over time, as the sexual revolution played out and contraception failed to live up to its billing, fair observers began to note a positive or prophetic thing or two about ‘Humanae Vitae,’ along with its surprisingly accurate read of human nature,” she wrote.

Janet Smith, who holds the Father Michael J. McGivney chair of life ethics at Sacred Heart Major Seminary in Detroit, told CNS the encyclical’s opening line — stating that “the most serious duty of transmitting human life” stems from the call of marriage — is the basis for church teaching on the family.

The difficulty facing the church is that young people generally view sex as a pleasurable experience shared among consenting partners, she said. However, in talks around the country Smith has encountered young people who “see the meaninglessness of casual sex,” creating an opening to explore the message of “Humanae Vitae.”

“It’s a growing movement of young people who are interested in being 100 percent Catholic,” she said.

Alvare echoes this assessment: “‘Humanae Vitae’ took sex seriously, far more seriously than the contemporary world, for all of its talk about sex.”

In April, Philadelphia Archbishop Charles J. Chaput told a Catholic University of America symposium commemorating the encyclical’s anniversary that it is time for the church’s teaching on marriage, abortion, human sexuality and artificial contraception to be embraced as God’s will for the faithful.

He explained that the teaching is rooted in the same respect for human dignity that guides its work for social justice and care for poor people.

“‘Humanae Vitae’ revealed deep wounds in the church about our understanding of the human person, the nature of sexuality and marriage as God created it. We still seek the cure for those wounds. But thanks to the witness of St. John Paul II, Pope Benedict, Pope Francis and many other faithful shepherds, the church has continued to preach the truth of Jesus Christ about who we are and what God desires for us,” the archbishop said.

“People willing to open their eyes and their hearts to the truth will see the hope that Catholic teaching represents and the power that comes when that truth makes us free,” he added.