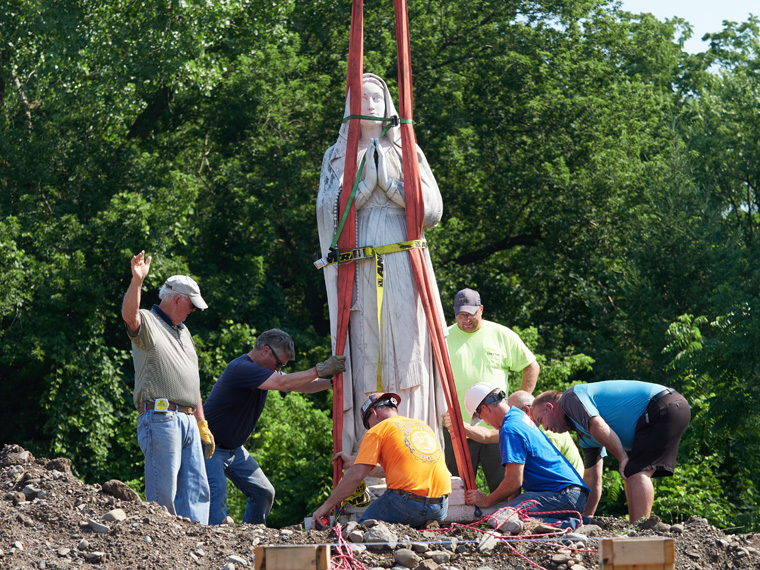 Mary statue and bell tower move from one church to another

As the bell tower was placed at Our Lady of Hope Church, a construction expert advised an observer not to look when the welding began.

Otherwise, the project was really something to goggle at — a cross-Valley spectacle in Syracuse on July 27.

Involving a lot of heavy equipment, a contingent of ironworkers, and a sizable crane, the bell tower and the huge statue of Mary that stood at the former Our Lady of Lourdes Church were unmoored, placed in trucks for a police-escorted journey of about two miles, and finally replanted at Our Lady of Hope.

Pleased with the smoothness of the complex project, Father Christopher Ballard, pastor of Our Lady of Hope, said with a laugh: “The only hitch was the hitch attaching the bell tower and the statue to the crane.”

Waiting for the arrival of both the statue and the bell tower at Our Lady of Hope were a raised area that will become a grotto and a reinforced wooden box with four receptacles for the four metal posts on the bell tower.

With the bell tower placed in the box by deft maneuvering of the crane, Syracuse City Court Judge Rory A. McMahon, who had organized the labor for the project, told onlookers it was time for a prayer:

The man in the orange shirt, Ironworkers Local 60 worker Matt Nesbitt, would now climb a ladder and stand on a crossbeam to remove the heavy straps that still connected the bell tower to the crane. Nesbitt safely removed the straps and tossed them to the ground from his brave perch on the tower. Everyone was happy there was little or no wind to complicate the process.

With the icons installed, Father Ballard prayed: “Lord God, we give you thanks through the intercession of the Blessed Mother that this project has happened so far safely and well, and we thank you, Lord, for this beautiful day and for these good people that have gathered and those that are doing this hard work.

“And we ask you, Lord, to continue to shine your blessings upon this project and on our parish and upon our homes and our families, and we ask all this through the intercession of the Blessed Mother and through Jesus Christ, our Lord, amen.”

The hard work continued the next day, when the workers filled in the receptacle box with concrete reinforced with metal bars.

“Our Lady of Lourdes hasn’t died, it’s just made a transfer,” said Our Lady of Hope parishioner Joe Boehm, who watched the icon transferal for several hours with his wife, Dorothy. For years, because the Mass time was convenient, the Syracuse residents went to Mass every morning at Lourdes until it closed.

Instead of playing a Saturday round of golf at his club, Tuscarora, Joe arrived at the former Lourdes Church at 7:30 a.m. to watch the workers. He said they cut off the bell tower’s four-cornered bottom, which was quite rotted.

But now, the tower stands behind the parking lot of Our Lady of Hope, vying only with the trees for vertical prominence. The statue of Our Lady of Lourdes is nearby, awaiting its waterfall.

Father Ballard said there’ll be “trees, flowering trees, shrubs, garden, and there’ll be a gathering space where we can have Mass. There’ll be an altar there. There’ll be a waterfall at the feet of the Blessed Mother. So I think the overall feel will be garden-like and a natural setting.”

Our Lady of Hope parishioner Joe McGinn, a general contractor who works for Edgewater, said he went to Our Lady of Lourdes School with Judge McMahon; he remembers holding fundraisers for the Mary
statue there when they were in the third grade. He later coached CYO basketball there; now he does the same at St. Lucy’s in Syracuse.

‘A PLACE OF PEACE’

Commenting on the relocation of the icons, he said: “For me, it’s a sad and happy thing. It’s gonna be sad for me to go down Valley Drive and not see it at Lourdes anymore; happy that it’s gonna be right here in its new home where I can see it in a new location.”

God-willing, the garden-like scene behind Our Lady of Hope will be beautifying the Valley by the middle of September, with the dedication in the middle of October, Father Ballard said.

What will it add to his church?

“A couple things,” he said. “It’s a coming together of two communities and I think it’s a physical representation. As Catholics, we’re sacramental people, so we depend on the physical things to help lead us to the spiritual things, and I think that’s one thing that this does.

“It’s a physical representation of two communities coming together into one. And it’s a sanctuary in the city. It’s a place of prayer, a place of peace, a place to reflect, and just to be close to God, and I don’t think there’s anything like it in the city limits — an outdoor grotto sanctuary kind of space.”

This could not have been accomplished without the expertise, dedication and hard work of many.  Our gratitude goes to all, but a few who were instrumental include

On board to bring their expertise to the part of the project to complete Our Lady’s Grotto: