If confirmed, Kavanaugh will keep Catholic majority in Supreme Court 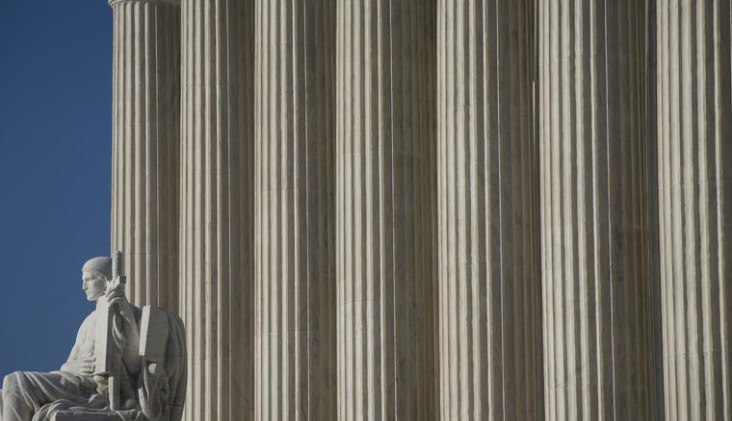 WASHINGTON (CNS) — When Brett Kavanaugh took to the podium July 9 at the White House after being introduced as President Donald Trump’s Supreme Court nominee, he revealed, among other things, that his Catholic faith is a big part of his life.

He spoke about coaching his daughter’s CYO basketball team, serving the homeless with a priest in the audience who used to be his pastor, following the motto of his Jesuit high school to be “a man for others” and being “part of the vibrant Catholic community in the D.C. area.”

The frank discussion of his Catholicism probably wasn’t shocking for many court-watchers who may already have known that three of the four candidates who were on Trump’s top list of potential nominees — Kavanaugh and Judges Amy Coney Barrett and Thomas Hardiman — are Catholic.

And if Kavanaugh is confirmed by the Senate, he will not only replace retiring Justice Anthony Kennedy, who is Catholic, but he also will join four other Catholic justices already on the bench — Chief Justice John Roberts and Justices Clarence Thomas, Samuel Alito and Sonia Sotomayor.

Judge Neil Gorsuch, who was raised Catholic but now attends an Episcopal church with his family, attended the same Catholic high school as Kavanaugh — Georgetown Prep in Maryland. He filled the vacancy left by the death of Justice Antonin Scalia, who was Catholic.

The other justices on the court: Elena Kagan, Ruth Bader Ginsburg and Stephen Breyer are Jewish.

Francis Beckwith, a professor of philosophy and church-state studies at Baylor University in Waco, Texas, thinks this current mix of religious traditions in the court could have something to do with the emphasis on law in both faiths: canon law in the Catholic Church and the Talmudic law in the Jewish tradition. But he also said the study of law and medicine was something the second generation of Catholic and Jewish immigrants sought as professions.

Richard Garnett, professor and associate dean at Notre Dame Law School, has periodically written about or been interviewed on the topic of Catholics in the nation’s high court for the past decade. He thinks the current influx of Catholics simply reflects that they were suitable candidates for Republican presidents because of the Catholic anti-abortion stance.

Sotomayor, was the exception, appointed by President Barack Obama. In a 2013 interview with The New York Times, she described herself as a “very spiritual person” although she added: “maybe not traditionally religious in terms of Sunday Mass every week, that sort of thing.”

For most of the court’s history, its justices were primarily Protestant, with only a smattering of Catholics.

Garnett outlined the history of Catholics in the court in a 2006 article for Cushwa Center for the Study of American Catholicism at the University of Notre Dame in Indiana.

According to his research, 12 Catholic justices have served on the Supreme Court and one more, Justice Sherman Minton, became Catholic after he left this post. The first Catholic named to the court was Chief Justice Roger Taney, appointed by President Andrew Jackson in 1836. He is principally remembered for writing the Dred Scott decision upholding slavery.

After Taney left the court, another Catholic, Chief Justice Edward White, was not named to the bench for another 30 years. In the early 1900s, White and Justice Joseph McKenna were on the court at the same time. They were followed by Justice Pierce Butler, appointed in 1923, and Justice Frank Murphy, appointed in 1940. The “Catholic seat” then sat empty for seven years until 1956 when Justice William Brennan joined the court.

Scalia overlapped with Brennan for four years and then came the current Catholic justices. Clarence Thomas was raised Catholic and went to Catholic college and the seminary, but at the time of his appointment in 1991, he was not a practicing Catholic. He came back to the church a few years later.

These nominees faced scrutiny for their Catholic faith. President Franklin Roosevelt promised that Murphy would “not let religion stand in his way” which Murphy reiterated in senate hearings saying his faith and vocation were kept “in air-tight compartments.” In Thomas’ hearings, even though he was attending services at an Episcopal church at the time, he was questioned if he would be independent from the pope, since he had attended Catholic schools.

Roberts and Alito also were questioned about their Catholic faith but not extensively grilled on it, which some saw as a victory over anti-Catholicism that had been part of America’s history.

“Catholics bring to the court a greater sensitivity and understanding of the human condition,” said Joshua Sandman, professor of political science at the University of New Haven in Connecticut. He said over the years Catholic judges have not been “chosen specifically for the Supreme Court because they were Catholic. They were chosen because of their capability and ideological preference of the president who selected them. They happened to be Catholic.”

Robert Hume, a political science professor and chair of the department at Fordham University in New York, similarly called it a coincidence that Kavanaugh is Catholic, noting: “It mattered more that he was one of Justice Kennedy’s clerks.”

As far as how Catholics will view Kavanaugh, he said it is difficult to say because of the wide range of Catholic views. He also said it would be ” interesting to see if Judge Kavanaugh’s jurisprudence embraces all of the tenets of Catholic doctrine, or just some of them.”

John Vile, professor of political science and dean of the University Honors College at Middle Tennessee State University, said Kavanaugh’s nomination, like Gorsuch’s, had more to do with being perceived as “social conservative voices.”

He said people often associate Catholics with opposition to abortion, but he noted that Brennan was a strong supporter of Roe v. Wade, the court’s decision legalizing abortion.

Brennan was considered a primary influence in the Supreme Court’s 7-2 Roe decision, although he did not write the majority opinion. A 1993 biography of him says the “Catholic Church hierarchy was livid over Brennan’s vote.”