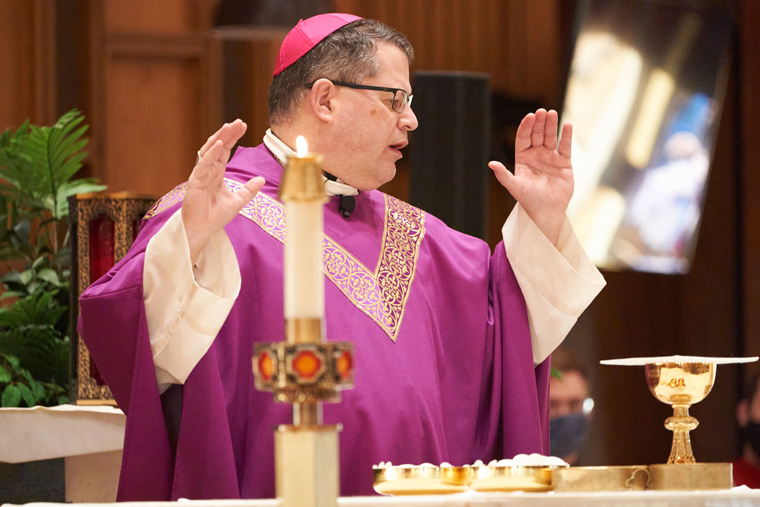 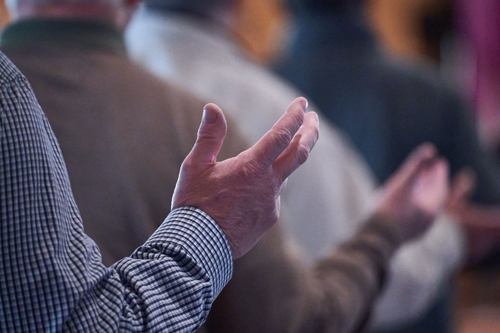 Attendees join in prayer at Sacred Heart Church. Many men participated at satellite sites around the diocese.

A morning-long virtual “run toward God” kept over 400 men focused on the proper avenues of fatherhood Saturday.

The IGNITE 2021 Catholic Men’s Conference saw 65 percent of its attendees at the 17 satellite sites in the Diocese of Syracuse; the rest tuned in from home. The Zoom conference, which ended shortly after noon, emanated from Sacred Heart Church in Cicero, where seminarian James Buttner opened the day leading the recitation of the Luminous Mysteries of the Holy Rosary.

Seminarian Buttner noted that the Joyful Mysteries are often recited on Saturdays, but he switched because “I thought it aligned well with our conference this morning.”

Last year’s conference was canceled due to the coronavirus pandemic, so this year it resumed with a hybrid schedule; a theme of “Take Refuge in the Lord”; and many references to the foster father of Jesus, St. Joseph.

Although missing the usual panel session at SRC Arena in Syracuse, the conference proceeded with speakers and instant online polls of the participants featuring questions about fathers and fatherhood.

“Today we are invited to run toward God,” said Bishop Douglas J. Lucia, who celebrated Mass after the rosary recitation, “and in that we will find all we need and even more than we could hope for.” The Mass was offered in memory of Betty K. Lucia, the bishop’s mother, who died March 9. 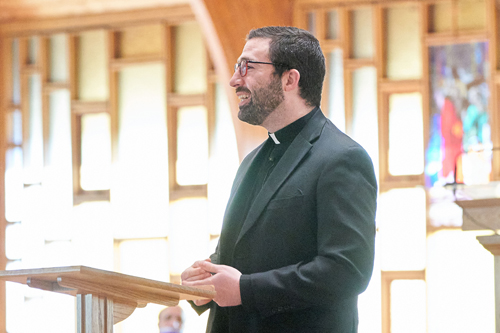 The petitions for the Mass included this: “That all men may follow St. Joseph’s example of faithfulness and trusting God.” Bishop Lucia has declared in the Diocese of Syracuse a Year of Vocations, under the patronage of St. Joseph, from Nov. 14, 2020, to Nov. 21, 2021.

The Mass also included prayers for an end to the pandemic, an increase in respect for all life from conception to natural death, and an increase in vocations to the priesthood and the diaconate.

IGNITE 2021, Bishop Lucia said, represented a “truly important day in our diocese — it is a day of spiritual renewal.”

The bishop told the men that letting God into their lives can bring them strength to keep going. He added that the Holy Spirit “can bring us joy, goodness, gentleness, kindness, chastity, and so many other fruits.”

That led into an address by the “super-pumped” Father Jason Hage, diocesan Director of the Office of Vocation Promotion and the pastor of several parishes.

He spoke about “The Fatherhood of St. Joseph” and Pope Francis’ most recent Apostolic Letter, Patris Corde (With a Father’s Heart).

Father Hage said Patris Corde notes that St. Joseph, as a man who turned his human vocation to domestic love, plays an incomparable role in the history of salvation.

Other aspects of St. Joseph noted by the pope, Father Hage said, include tenderness; obedience; unconditional acceptance of Mary (“He makes the law of charity the supreme law of his life”); and courageous creativity (“In Joseph, we never see frustration”).

He also advised fathers to “surrender your entire body and soul over to the will of God.” And he reminded the men of the “incredible, unfathomable mercy available in confession. … God’s truth does not condemn but welcomes, embraces, sustains, and forgives us.” 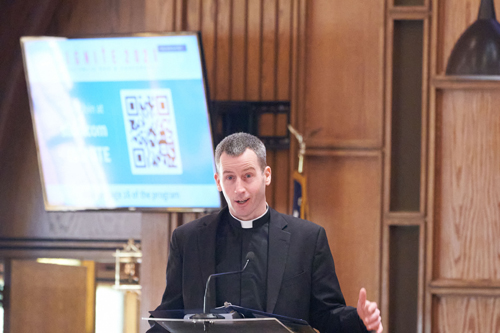 Father Joseph M. O’Connor, the MC of the conference, poses questions to the attendees. He asks: “Are the parts of your identity in the right order? If not, how will you get them there? If so, how do you continue to make sure they stay in the correct order?”

Some questions for you

Guest speaker Steve Ray, a convert to the Catholic Church who speaks at conferences around the world, said on his Zoom link that his own father wanted the children to read books and have an imagination — so no TV. His father, who died at 94 (his mother turns 100 soon), worked for Ford Motor Co. for 35 years and turned down every promotion because he would have had to work evenings and weekends. He told the company that he had children at home who needed him more than Henry Ford did.

So, instead, Ray’s father read books to the children in the evenings and “sang his hymns every night to put us to sleep. … I act and do things as my dad did. I think when you look at Jesus, you saw Joseph. Jesus would have looked up at his dad. … I think everyone loved to be around Joseph and Jesus.”

Ray, 66, of Michigan, has been married almost 45 years, with four children and 18 grandchildren, one of whom is talking about becoming a priest. He invited the IGNITE attendees to “walk in St. Joseph’s sandals for a day. Let’s step back in time and enter another world.”

Ray imagines that in the first century, Nazareth was a small village with about 250 people (Nazareth now is packed with cars, he said). He sees the people living in dark caves, with roosters, chickens, and oil lamps with dim flames and fires that leave dark soot on the cave ceiling. He sees the Holy Family in their sheep’s wool that kept them warm at night.

He figures that the family got up and prayed, and Mary went to get water with a jug on her head. The simple breakfast may include eggs, grain, fish, dates, figs, olives, lentil, and grasshoppers.

As Jesus grew, Ray said, he would, in sequence, study Scriptures, learn traditions, practice the commandments, go to synagogue, and study the Talmud. As carpenters, Joseph and Jesus may have worked with stone, rock, or metal.

“They were strong,” Ray said, and he’s convinced that they could wrestle you to the ground or throw you over a wall if they wanted to. But Joseph tenderly cared for his family, Ray said, and “I don’t think there’s any more manly man than that. This is what fathers should be.” 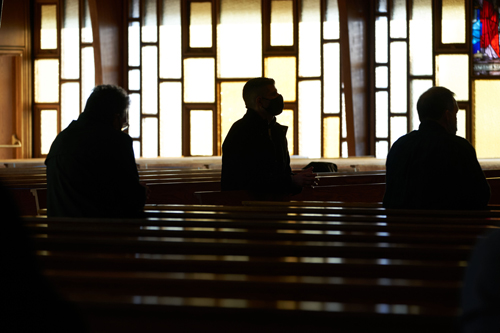 These men are among the attendees at Sacred Heart Church. Men who participated online offered comments such as “Thank you all. Great program and encouragement.”; “Awesome!”; and “World Class! Great speakers and organization.”

When Joseph and Jesus came home from work, Ray said, Mary would have dinner ready. They would say the ritual prayers that all Jews prayed and then crash exhausted on mats. Joseph, without a lot of money, “had to live trusting God and he did,” Ray said.

He noted that Joseph “had control of his passions, body, mind, and actions,” as opposed to those today who give in to pornography. “Start over in confession,” in order to be like Joseph, he said.

“God always rewards guys if they put him first and obey him and keep moving forward following his law,” Ray said.

“Imagine walking the hour to work with Jesus,” Father O’Connor said. “What would that be like? What would you talk about during that walk?”

A convert to the Catholic Church from Lutheranism, Chris and his wife, Shannon, have two sons and four daughters; they lost three children in miscarriages and Chris always prays to them to intercede for their family.

“I truly believe everything the Church teaches,” Greisen said, but in the past he was a “cafeteria Catholic” and did not believe contraception was bad. He got a vasectomy, he said, “and then I learned the truth.” He had the procedure reversed, and two of his daughters were born after the reversal. He thanks God “for teaching me to be truly Catholic.”

He decried abortion, euthanasia, and allowing boys to play in girls’ sports: “Is this a Christian country? Really?”

How about some joy?

Greisen challenges his football players to add weights to the bar, and he challenges himself daily. “Does Christ live within you?” he asked. “When people see you, do they see Jesus Christ? Do they see joy and love?” He said he has to teach his two sons through words and his modeling of good fatherhood so they know how to be good fathers someday.

He asked the attendees: “How can you live a Christian life in a secular world?”

Some of his answers:

• Mark 8:36: “What profit is there for one to gain the whole world and forfeit his life?”

• Making your No. 1 goal to get to heaven and become a saint.

• Either get better every day, or you get worse; you never stay the same.

• Do something every day to achieve your goal.

• Read the Bible and the Catechism.

• Receive Jesus in the Eucharist.

• Listen to relevant programs such as EWTN.

Here are some online comments from IGNITE attendees:

“Thank you, Chris, there is you, a convert, showing us, a life timer, what we should be doing. Amen.”

“Chris inspired me to think about who I really am, and to focus on the correct priority. Thank you, Chris! (From one convert to another!)”