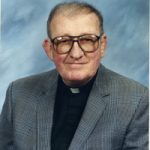 Father Anthony Keeffe, a priest of the diocese for more than 55 years, died Feb. 26. He was 87 years old.

A native of Holy Trinity Parish in Syracuse, Father Keeffe attended his parish elementary school and graduated from Assumption High School in 1951. After earning a bachelor’s degree from Le Moyne College, he completed his seminary studies at Christ the King Seminary in Olean.

Father Keeffe was ordained to the priesthood on May 18, 1963, at the Cathedral of the Immaculate Conception in Syracuse. Father Keeffe’s ministry included service as associate pastor at Our Lady of Solace in Syracuse, St. Joseph the Worker in Liverpool, and Holy Trinity, as well as pastor of Blessed Sacrament Church in Utica, St. John the Evangelist Church in Pulaski, St. Anne’s in Parish, St. Frances Xavier Cabrini in Lacona, St. Mary’s in Altmar, and St. Patrick’s in Williamstown. He served as director of Unity Acres for a time in the 1970s. Father Keeffe retired in 2003.

As a champion of social justice, Father Keeffe told the Sun in 2013 that one of his goals was to bring an awareness of the struggles of the disenfranchised to his parishioners. He also tried to bring the disenfranchised into the church community whenever he had the opportunity.

“I’m quite inspired by our new pope,” Father Keeffe said then, on the occasion of his 50th anniversary of ordination, not long after Pope Francis had been elected. “I’m impressed by his energy and his efforts to make our church aware of social justice.”