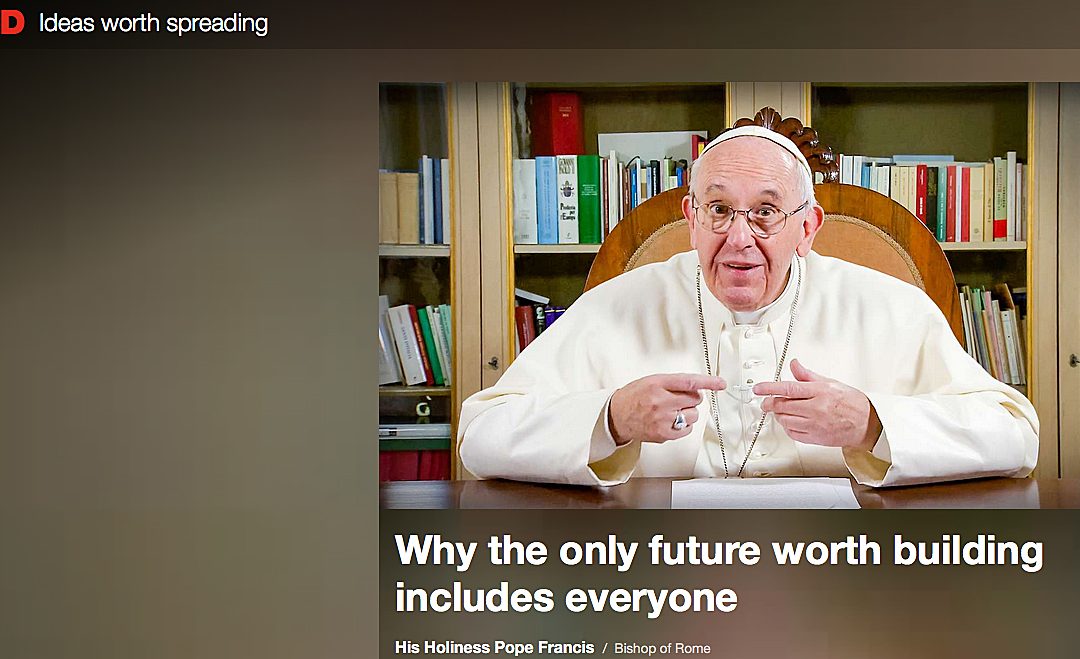 VATICAN CITY (CNS) — While searching for a connection today often means looking for Wi-Fi, Pope Francis said real connections between people are the only hope for the future.

“How wonderful would it be if the growth of scientific and technological innovation would come along with more equality and social inclusion,” he said in a video talk played April 25 for 1,800 people attending TED 2017 in Vancouver, British Columbia, and posted online with subtitles in 20 languages.

“How wonderful would it be, while we discover faraway planets, to rediscover the needs of the brothers and sisters orbiting around us,” the pope said in the talk that TED organizers had been advertising as that of a “surprise guest.”

Pope Francis spoke to the international conference about combating the current “culture of waste” and “techno-economic systems” that prioritize products, money and things over people.

“Good intentions and conventional formulas, so often used to appease our conscience, are not enough,” he said. “Let us help each other, all together, to remember that the other is not a statistic or a number. The other has a face.”

Many people in the world move along paths “riddled with suffering” with no one to care for them, the pope said. Far too many people who consider themselves “respectable” simply pass by, leaving thousands on “the side of the road.”

“The more powerful you are, the more your actions will have an impact on people,” he said, the greater the responsibility one has to act and to do so with humility. “If you don’t, your power will ruin you, and you will ruin the other.”

“There is a saying in Argentina,” he told his audience: “‘Power is like drinking gin on an empty stomach.’ You feel dizzy, you get drunk, you lose your balance, and you will end up hurting yourself and those around you, if you don’t connect your power with humility and tenderness.”

“The future of humankind isn’t exclusively in the hands of politicians, of great leaders, of big companies,” he said, even though they all have power and responsibility. “The future is, most of all, in the hands of those people who recognize the other as a ‘you’ and themselves as part of an ‘us.’”

Pope Francis said that when he visits someone who is sick or in prison or has been forced to flee war, he always asks himself, “Why them and not me?”
Telling the tech-savvy crowd that he wanted to talk about “revolution,” the pope asked people to join a very connected and interconnected “revolution of tenderness.”

Tenderness, he said, is “love that comes close and becomes real,” something that begins in the heart but translates into listening and action, comforting those in pain and caring for others and for “our sick and polluted earth.”

Pope Francis also urged the crowd to hold on to hope, a feeling that does not mean acting “optimistically naive” or ignoring the tragedies facing humanity. Instead, he said, hope is the “virtue of a heart that doesn’t lock itself into darkness.”

“A single individual is enough for hope to exist.” he added. “And that individual can be you. And then there will be another ‘you,’ and another ‘you, and it turns into an ‘us.’”

TED (Technology, Entertainment, Design) is a media organization that posts talks online for free distribution, under the slogan “ideas worth spreading.” TED was founded in February 1984 as a conference, which has been held annually since 1990.