In the reunification scramble, church groups raced to help families 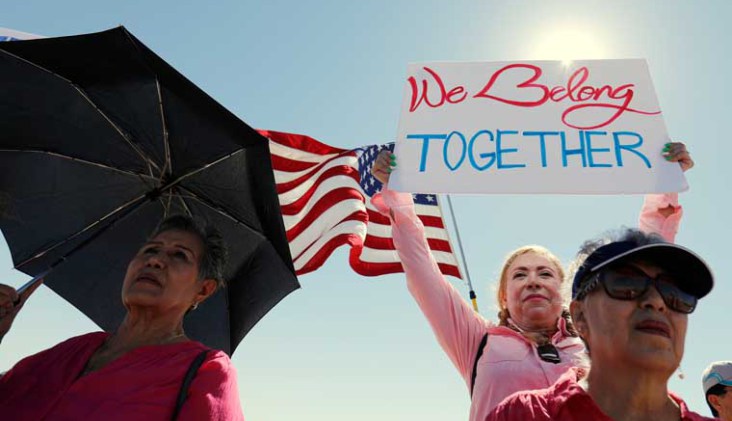 A woman holds up a sign June 21 near a detention facility where children of migrants were being at the port of entry in Tornillo, Texas. -CNS photo | Mike Blake, Reuters

WASHINGTON (CNS) — In public and behind the scenes of a court order that immigrant families separated by the U.S. government be reunited by the end of July 26, the Catholic Church, from its leadership to its charitable and advocacy organizations, worked around the clock to speed up the effort, while also calling for a stop to the policy that led to the ordeal.

Catholic humanitarian organizations rushed to collect material help, bishops loudly denounced the separation policy, and groups such as Catholic Extension established a fund to shelter, feed and defend some of the separated immigrant families.

By the end of deadline day, when the more than 2,500 children separated were supposed to have been reunited with family members, Immigration and Customs Enforcement said 1,442 of them had found their way to a loved one and said the rest did not have an “eligible” family member to go to. The number of families the government reported reuniting by the following morning increased to 1,800 by some counts, but many say it’s too early to paint a clear picture of who’s been reunited.

Away from Washington, where the crisis began with a “zero tolerance” memo implemented in April, at places dealing head-on with the crisis it created — such as Catholic Charities of the Rio Grande Valley in McAllen, Texas — staff and volunteers were still seeing affected families trickle in on July 27, said Ashley Feasley, director of policy for the U.S. Conference of Catholic Bishops’ Migration and Refugee Services. The Texas facility served as a safe physical space for families to be reunited following their release.

In a July 27 telephone briefing organized by the National Immigration Forum, Feasley said about 500 separated families passed through Catholic affiliated centers, such as Catholic Charities, in places such as McAllen, San Antonio and Phoenix. Annunciation House in El Paso, Texas, also helped.

The Catholic Charities center in the border town of McAllen, at least, was expecting to see more of the separated families passing through into the weekend following the deadline, Feasley said.

Though there were joyous reunions, “they are very traumatized people,” said Feasley.

Once immigration officials deemed the children could be reunited with the adults, they were taken to the “staging facilities,” such as Catholic Charities, where they were given temporary shelter, if they needed it, a hot meal, a change of clothes, access to a shower and sometimes assistance so they could continue their travels toward the home of family or friends, Feasley said.

But the weight of what had happened, plus arduous overnight travel for children and adults, as the government pushed to meet the deadline, left many of the affected family members visibly exhausted by the time authorities handed them over to Catholic aid organizations, she said.

Yet those were the fortunate ones. About a third of those who were separated remain apart, with the government saying they are “ineligible” for reunification.

“And it’s unclear what that means,” said Cathleen Farrell, director of communications for the National Immigration Forum.

Some adults apprehended when the separation policy went into place, possibly about 400 to 500 of them, have been deported, making it unclear what will happen to their children.

While Catholic aid groups, along with other faith-based entities, such as Lutheran Immigration and Refugee Service and Bethany Christian Services, were busy tending to the needs of the families following their ordeal, other church groups were calling for answers, pressing the government for action in reuniting the remainder.

“The administration alone started this problem and has a moral obligation to reunite all the families they separated, not just the ones they deem acceptable or can currently locate,” said Kevin Appleby, senior director of international migration policy for the Center for Migration Studies and the Scalabrini International Migration Network. “Just imagine if families were separated at the time of Christ. The baby Jesus could have been taken from the arms of the Holy Mother in the Gospel of Matthew, as they fled the terror of Herod into Egypt.”

Groups such as the Sisters of Mercy Institute Justice Team called on people of faith and others to contact members of Congress urging them to stop policies “criminalizing immigrants,” such as the “zero tolerance” policy that created the crisis.

Though family separation had been practiced before, immigration authorities, following orders by the Trump administration, began taking children away from parents or relatives in greater numbers as they were caught trying to cross the border with Mexico in June, even if they were entering seeking asylum.

“At the end of the day, the ‘zero tolerance’ policy should be stopped altogether, as these families are not a threat, first, and should not be subject to long term detention, second.  They are bona fide asylum seekers, not criminals, and should be treated accordingly,” said Appleby.

What happens to the families now is anyone’s guess but their plight is not over, as many have to figure out a way to grapple with the emotional toll of what’s happened and get ready for court dates to deal with their undefined immigration situation.

Chief among the uncertainties surrounding the crisis that didn’t come to an end because of a deadline, is what will happen to families who will continue to cross over. The administration has said it wants to practice family detention for illegal border crossers.

“(U.S.) bishops remain extremely concerned,” said Feasley, adding that for the moment, the main concern is for the well-being of those affected, and to try to do what’s possible “to make these families whole again.”