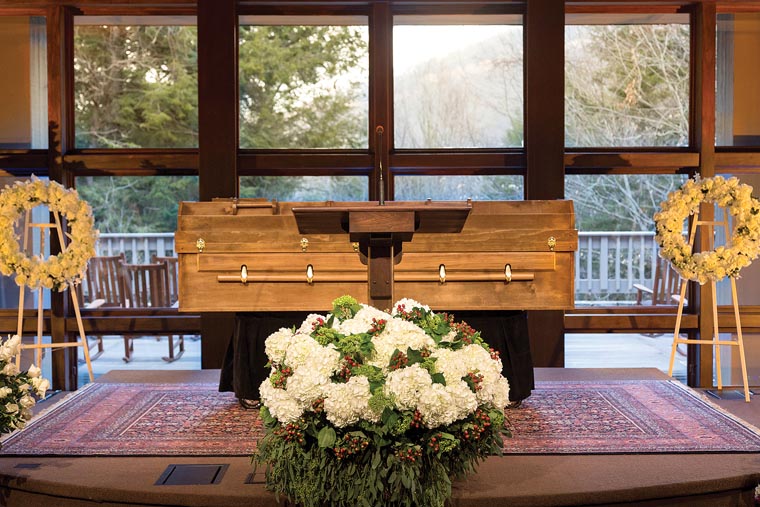 NEW ORLEANS (CNS) — In 1995, as inmates at the Louisiana State Penitentiary at Angola lowered the makeshift, cardboard casket containing the body of fellow inmate Joseph Siegel into freshly dug ground at the prison’s cemetery, Siegel’s body fell through the bottom of the coffin.

Then, as the pallbearers positioned the casket with care over his body and began shoveling dirt, the top collapsed.

Burl Cain, in his first year as warden at the nation’s largest maximum-security prison, where all but a fraction of the 5,000 men will die without ever walking back through the gates, had seen enough.

Cain gathered inmates for what, by Angola standards, would be an unusual warden-prisoner talk. Many of the prisoners were skilled craftsmen, who had worked for years to set up the popular Angola Prison Rodeo.

“I told them, ‘Men, you’re going to die here, and we’ve got to do this with dignity,'” Cain recalled. “‘Y’all are going to build a coffin, and it’s going to be a nice coffin. When you die, you’ve served your sentence, and there’s no reason for anybody to kick your body.'”

That event more than two decades ago led to inmates at the prison building the casket for the Rev. Billy Graham, the charismatic evangelical Christian leader who died Feb. 21 at age 99.

Cain served as warden at Angola for 21 years and is credited with changing the violent and deadly prison culture through an emphasis on what he calls “moral rehabilitation.”

Cain said he was being “selfish” when he decided to open Angola to the outside world, with an emphasis on theological training.

“I realized this: Moral people don’t rape, pilfer and steal,” Cain said. “So, if I could get these guys to become moral, I’d have a safer prison, I could survive.”

In 1997, Chuck Colson, an evangelical Christian who had served prison time for obstruction of justice in the Watergate scandal and who had begun a national prison ministry, visited Angola with Tex Reardon, who was associated with the Rev. Graham and his worldwide evangelical crusades.

“In the 1950s, my mother would send a check for $5 every month to Billy Graham, even though she was a school teacher and my parents were poor,” Cain said. “So, I asked Tex Reardon if there was any way he could get Billy Graham to come here — because this prison needed him.”

Not long after that, Graham’s son Franklin visited Angola and was so impressed he set the wheels in motion for the construction of two more chapels — one for the inmates and another, Cain said, for “the employees of our little city.”

They put an old bell in the top of an imposing steeple. The bell came from a locomotive that hauled sugar cane around the 18,000-acre Angola plantation the late 1800s, before it became a prison that was larger than the island of Manhattan.

“The Grahams wanted that steeple to be tall enough so that you could see the church from death row,” Cain said.

During one of Franklin Graham’s visits to Angola, he walked into the prison museum and saw an inmate-made casket. He was overwhelmed by the beauty and simplicity of the treated plywood. The white bedding for the inside of the coffins comes from Walmart.

“He told me, ‘This is one my Dad would want to be buried in. It’s so plain, but it’s built by prisoners. We’ve got to have these,'” Cain said.

Franklin Graham ordered six coffins, including for Rev. Graham and his wife Ruth, who died in 2007.

Three inmates — Richard “Grasshopper” Leggett, Clarence “Mr. Bud” Wilkerson and David Bacon — had the special assignment. Of the three, only Bacon is still alive. He was paroled in December 2012.

“They would pray before they started every day and ask that God would anoint their work, because this was a very serious thing,” Cain said. “Billy Graham was a human — he wasn’t God — but he was one of the godliest humans on the earth. They took it very seriously. And, it was a reverent operation.”

At Franklin Graham’s request, the three inmates wood-burned their names into the outside of each casket.

Rev. Graham was to be laid to rest March 2, in that Angola coffin, after lying for two days in the U.S. Capitol Rotunda.

“If my mother in heaven knows what’s going on down here, she would be so proud, because when she wrote those little $5 checks, it influenced her son to like Billy Graham,” Cain said. “She led me in that direction.”

While, because of ill health, Rev. Graham never could visit Angola, Cain sent him a key to one of Angola’s old cells. A few years ago, Cain traveled to the mountains of Montreat, North Carolina, to offer his thanks for all that Rev. Graham and his son had made possible at Angola.

Peter Finney Jr. is executive editor/general manager of the Clarion Herald, newspaper of the Archdiocese of New Orleans.