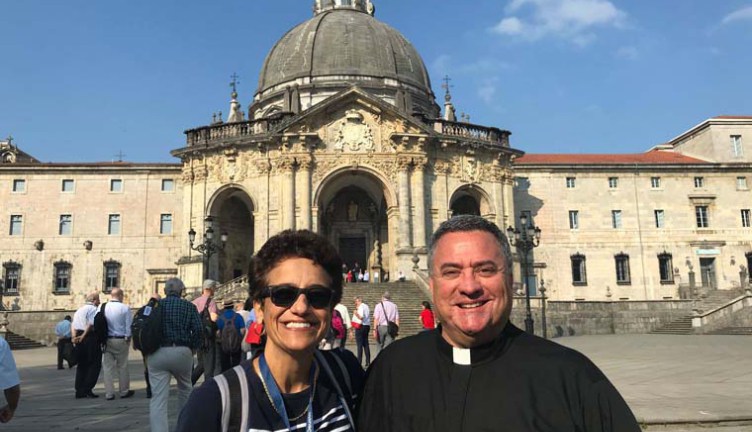 Le Moyne College leaders walked in the footsteps of the Jesuits’ founder, St. Ignatius of Loyola, at a July conference that launched an organization focusing on collaboration among the world’s 187 Jesuit colleges and universities.

Le Moyne President Linda LeMura and Jesuit Father Joseph Marina, provost and vice president for academic affairs, were among about 300 people at the July 9-12 Deusto Assembly 2018, Transforming Our World Together. During the conference at the University of Deusto, a Jesuit college in Bilbao, Spain, representatives of the six Jesuit regions signed the charter forming the International Association of Jesuit Universities (IAJU).

Participants traveled about an hour from Bilbao to Loyola, birthplace of St. Ignatius (1491-1556), who founded the Jesuits, known as the Society of Jesus, in 1540. “We were able to see the place where he was born and the room where he experienced his conversion after being wounded in battle,” Father Marina said. 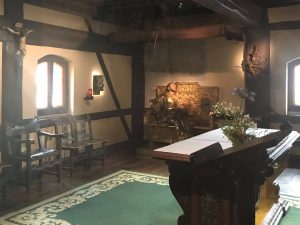 The room where St. Ignatius experienced his conversion in 1521 is now a chapel. (Photo courtesy Father Joseph Marina, SJ)

“When we walked into the room of his conversion, everyone automatically went into prayer mode,” he said. “This holy silence descended. You could see everyone praying. Some were crying. To see this and see our counterparts from India and Africa and South America was a very powerful moment for me. I’ll never forget it.”

In Bilbao, Father Marina also visited the birthplace of Jesuit Father Pedro Arrupe (1907-1991), who served as superior general 1965-1983. Arrupe’s legacy includes a 1973 address that described creating “men and women for others” committed to social justice as central to Jesuit higher education. Arrupe’s canonization cause is underway.

Holding conference events near Loyola’s birthplace “was about bringing people together in a place where everyone would be able to resonate with the power and the nostalgia of that location,” Father Marina said.

In his keynote address at St. Ignatius Basilica, Loyola, Father Arturo Sosa Abascal, elected 31st superior general of the Society of Jesus in 2016, called collaboration “a key feature in the way of proceeding in daily university life.”

Collaboration “involves a culture of generosity, which overcomes the tendency to look after and increase resources only for the use of each individual university,” he said. “The culture of generosity is at the basis of better and greater achievements and of a full life.” 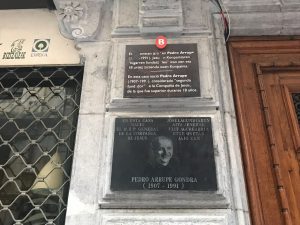 In Bilbao, the birthplace of Jesuit Father Pedro Arrupe (1907-1991), who served as the Jesuits’ superior general 1965-1983. Arrupe’s legacy includes a 1973 address that described creating “men and women for others” committed to social justice as central to Jesuit higher education. (Photo courtesy Father Joseph Marina, SJ)

Jesuit Father Michael J. Sheeran, president of the Association of Jesuit Colleges and Universities, signed the charter on behalf of the 28 U.S. Jesuit colleges and universities. He was named one of two U.S. delegates to the IAJU oversight board.

Le Moyne’s President LeMura was named the second U.S. delegate. During the conference, she served on a panel about income inequality. Jesuit Father David McCallum, Le Moyne’s vice president for mission integration and development, presented a paper on Ignatian formation for leadership in Jesuit higher education he and a task force drafted for the conference.

IAJU initiatives may include increased student and faculty exchanges, shared programming, and international conferences. Jesuit Father Gaël Giraud, a highly regarded economist in France who addressed the conference, has accepted LeMura’s invitation to speak this year at Le Moyne. His IAJU talk was called “Economic Inequality and Environmental Degradation and the Role of the Jesuit University.”

Father Marina envisions additional collaboration among U.S. Jesuit schools and further attention to IAJU’s core themes, which include education for marginalized people and refugees, interreligious understanding/dialogue, and peace and reconciliation.

“We will invite faculty to weave in the Ignatian tradition in their pedagogy,” he said. “If we can’t bring everyone to Bilbao, we have to try to bring Bilbao to them.”

Renée K. Gadoua, a freelance writer and editor who lives in Manlius, graduated from Le Moyne College. Follow her on Twitter @ReneeKGadoua.