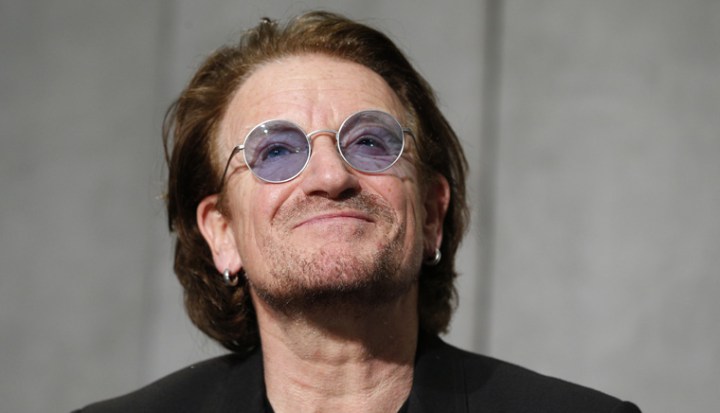 Bono, the lead singer of U2, smiles during a news conference in the Vatican press hall after meeting Pope Francis at the Vatican Sept. 19. (CNS photo | Paul Haring)

VATICAN CITY (CNS) — Bono, the lead singer of the Irish band U2, said he told Pope Francis that in Ireland “it looks as though the abusers are being more protected than the victims. And you could see the pain in his face.”

Bono met the pope Sept. 19 to sign an agreement between his charity, ONE, and the Scholas Occurentes educational charity supported by Pope Francis.

During the half-hour meeting, Bono said, he brought up Pope Francis’ recent trip to Ireland and the concerns there about the sexual abuse crisis.

The pope was “aghast,” Bono said. “I thought he was sincere.”

ONE is a campaign and advocacy effort working to end extreme poverty, especially in Africa. One of its current focuses, Bono told reporters Sept. 19, is education for girls and young women. Some “130 million girls around the world do not go to school, because they are girls,” he said.

“Poverty is sexist” is the campaign slogan, he said.

Scholas began in Pope Francis’ Archdiocese of Buenos Aires, supporting education in poor neighborhoods by pairing their schools with private schools and institutions in wealthier neighborhoods. The organization has grown to other countries and supports a variety of exchange programs aimed at promoting education, encouraging creativity and teaching young people about respect, tolerance and peace.

“We haven’t figured out what we are going to do together,” Bono said, “but we sort of have a crush on each other.”

Describing Jose Maria del Corral, president of Scholas, Bono said that “honestly, he is quite a radical thinker and I felt quite old-fashioned sitting next to him.” Bono was talking about teaching children how to read and write and “get to advanced math and art later. And he was like, ‘Start with art. And start with the creative life and you’ll get a better result.'”

Bono said the conversation with the pope touched on many topics, including poverty, commerce and meeting the U.N. Sustainable Development Goals.

They spoke, he said, “about how we have to rethink the wild beast that is capitalism and how, though it is not immoral, it is amoral and it requires our instruction. He’s very keen on that.”