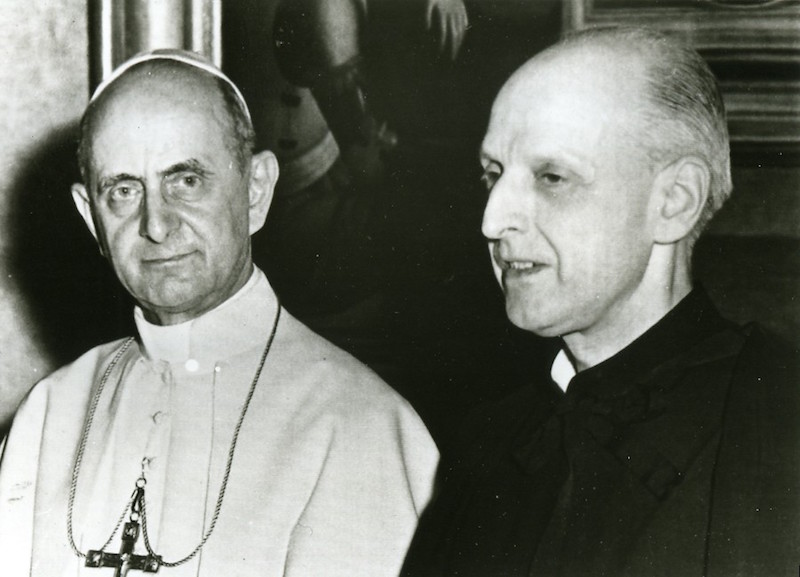 Blessed Paul VI is seen in an undated photo with Jesuit Father Pedro Arrupe, superior general of the Jesuits from 1965 to 1983. The sainthood cause for Father Arrupe was formally opened in Rome at the Basilica of St. John Lateran Feb. 5, 2019, the 28th anniversary of his death. (CNS photo | courtesy Jesuits Global)

ROME (CNS) — The sainthood cause of Jesuit Father Pedro Arrupe was formally opened in Rome at the Basilica of St. John Lateran Feb. 5, the 28th anniversary of Father Arrupe’s death.

The formal process of beatification and canonization includes compiling the priest’s writings and gathering sworn testimonies about his life and holiness. Once the Jesuit postulator had the list of potential witnesses and had collected the writings, the formal opening of Father Arrupe’s sainthood cause — the diocesan inquiry — could begin.

The documentation from the diocesan inquiry will be sent to the Vatican Congregation for Saints’ Causes, which reviews the gathered information. If he is found to have led a heroic life of Christian virtues, the church bestows the title “venerable.”

Cardinal Angelo de Donatis, vicar of Rome, presided at the ceremony Feb. 5, formally opening the diocesan inquiry.
He said Father Arrupe was firmly “rooted in Christ, whom he passionately loved and, with courageous faith, he let himself be guided in his journey by the wisdom and freedom that comes from the Holy Spirit.”

“He was a true man of God” and of the church by seeking “to integrate the best values from tradition with those necessary for adapting Christianity to new times” in accordance with the teachings of the Second Vatican Council, Cardinal de Donatis said.

He was also “rich” in such treasured qualities as the ability to listen, understand, respect, help and trust others, teaching many how to become “men and women for others,” said the cardinal.

Born in Spain in 1907, Father Arrupe entered the Society of Jesus in 1927. Following the expulsion of the Jesuits from Spain in 1932, he continued his studies in Belgium, the Netherlands and the United States. After ordination, he was sent to Japan in 1938.

According to the U.S. website of the Jesuits, Father Arrupe was serving in a Japanese mission outside of Hiroshima when the United States dropped the atomic bomb there in 1945. The Jesuit priest, who studied medicine before entering the society, and several companions “were able to give aid to 150 victims.”

In 1965, Father Arrupe was elected superior general of the Society of Jesus.

Father Arrupe worked to help Jesuits rediscover the Spiritual Exercises of St. Ignatius of Loyola, and the method of personal discernment and discernment in common helped the Jesuits renew their life, vows, community and mission.

He also established the Jesuit Refugee Service, which today serves refugees and other forcibly displaced persons in 52 countries.