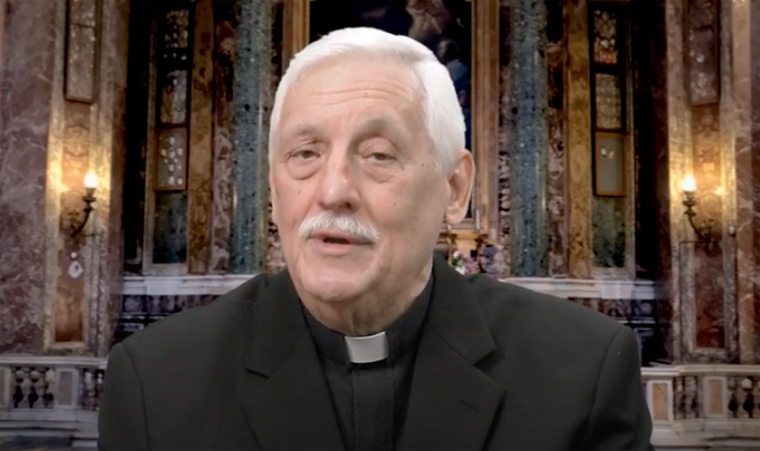 Graduating Le Moyne students received congratulations from the top Jesuit: Superior General Rev. Arturo Sosa. “Go, Phins,” he said in a video recorded in Rome, referring to the affectionate rallying cry for members of the Le Moyne community. The college’s mascot is a dolphin.

“I congratulate you on completing your course of study and I thank you for doing it with great grace in a very difficult time, caring for one another, for your city, and for our world during the COVID pandemic,” he said. “You have had the courage to grow in friendship with one another, friendship with your neighbors, and friendship in the Lord.”

He alluded to the challenges in creating Le Moyne College after World War II and urged graduates to build “a community that is stronger … more just, more inclusive, more sustainable, more human, more open to the spirit of God.”

Father Sosa’s video comments came just days after Jesuits worldwide kicked off the Ignatian Year, a 14-month commemoration of the 500th anniversary of St. Ignatius’ conversion at the Battle of Pamplona. Ignatius, a Spanish soldier, was injured after a cannonball hit him during the battle with French soldiers.

During his year-long recovery, Ignatius experienced a spiritual renewal and committed himself to Christ. He urged his followers to “find God in all things” and work “for greater glory of God.” The latter, Ad majorem Dei gloriam (AMDG), is the Jesuits’ motto.

The two phrases are often used at Le Moyne and other Jesuit institutions to describe their mission. “AMDG” is etched near the front door of Grewen Hall, the oldest building on campus.

More than 16,000 Jesuit priests, brothers, scholastics, and novices study and minister worldwide today, according to Jesuits.org. They make up the largest religious order of men in the Catholic Church. Jesuit missionaries — including Le Moyne’s namesake, Simon Le Moyne — first came to Central New York from New France (Canada) in 1654. Pope Francis, elected in 2013, is the first Jesuit pope.

Father Sosa, a native of Venezuela, was elected the Jesuits’ 31st Superior General in 2016.

In a May 4 letter marking the college’s 75th anniversary, Father Sosa echoed his video comments, praising “this vibrant community of learning and service at the heart of the State of New York.

“We too, like the founders of Le Moyne, need to build something better, more inclusive, and more humane,” he concluded. “Again God is at work in creation and in us. May we have the courage to join in this work of the Holy Spirit.”