Jesus does not give up on anyone, pope tells prisoners 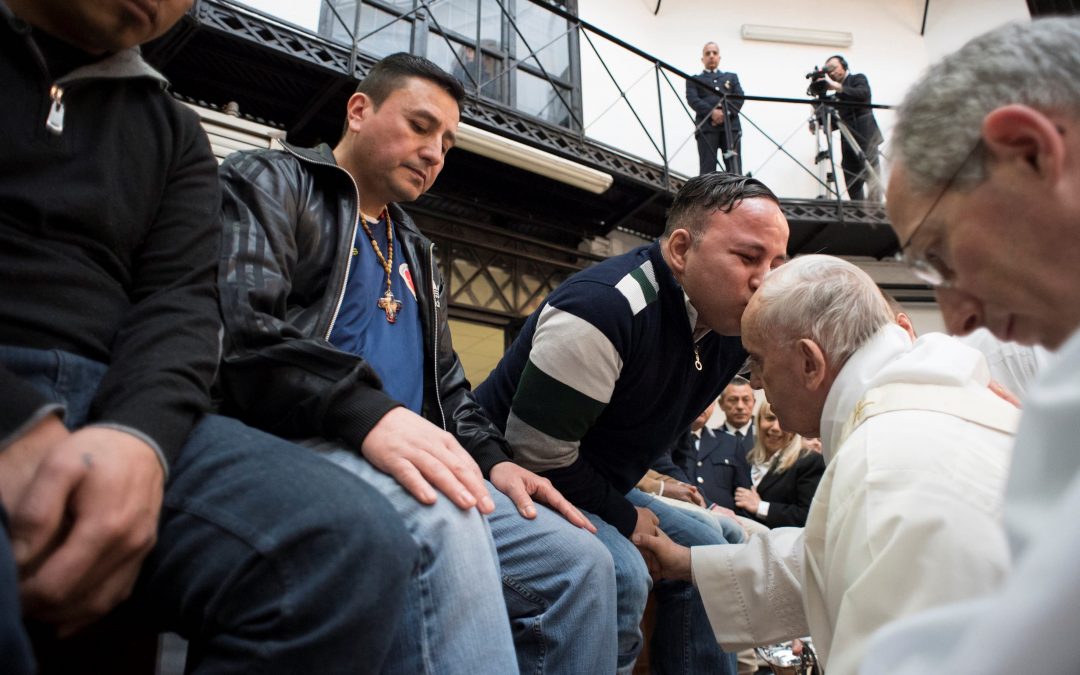 ROME (CNS) — Before washing the feet of 12 prisoners, Pope Francis told them and hundreds of inmates to remember that Jesus constantly stands before them with love, ready to cleanse their sins and forgive them.

“Jesus takes a risk on each of us. Know this: Jesus is called Jesus, not Pontius Pilate. Jesus does not know how to wash his hands of us; he only knows how to take a risk on us,” the pope said March 29 during his homily at Rome’s Regina Coeli prison.

Pope Francis celebrated the Holy Thursday Mass of the Lord’s Supper at the prison and washed the feet of a dozen inmates. Four were Italian; two were from the Philippines; two from Morocco; and one each from Moldova, Colombia, Nigeria, and Sierra Leone, the Vatican press office said. Eight of the 12 were Catholic; two were Muslim; one was Orthodox; and one was Buddhist.

In his brief homily before the foot-washing ritual, Pope Francis explained to the prisoners that in Jesus’ day, the job of washing feet was the task of a slave. “There wasn’t asphalt or cobblestones, there was dust and people’s feet got dirty,” so before they went into a house, the slaves would wash the person’s feet.

The Gospel recounts Jesus washing the feet of his own disciples “to give us an example of how we must serve one another,” the pope said.

Another time, he said, Jesus explained to his disciples that kings want to be served.

“Think of the kings and emperors back then, so many were cruel, they insisted on being served by slaves,” the pope said.

But Jesus told his followers: “Among you, it must not be like this. The one who rules must serve,” the pope explained.

“Jesus overturns the historic and cultural attitudes of his age — and of today, too,” Pope Francis told the inmates. Jesus says that “the one who rules, in order to be a good boss, must serve. I often think — not of people today because they still are alive and can change their lives, so we cannot judge them — but think of history. If many kings, emperors, heads of state had understood this teaching of Jesus, instead of ruling, being cruel, killing people, if they would have done this, how many wars would not have been fought?”

In his earthly life and still today, the pope said, Jesus goes to “people who are thrown away by society, at least for a while,” and he says to them, “‘You are important to me,’ and Jesus comes to serve us.”
“The sign that Jesus serves us today in Regina Coeli is that he wanted to choose 12 of you today for the washing of the feet,” the pope said.

“I am a sinner like you, but I represent Jesus today. I am his ambassador,” the pope said. “When I kneel before each of you, think, ‘Jesus took a risk on this man, a sinner, to come to me and tell me he loves me.’ This is service. This is Jesus. He never abandons us. He never tires of forgiving us. He loves us so much.”

The pope celebrated the Mass of the Lord’s Supper in the rotunda of the prison, a small central area formed from the intersection of various wings of the jail.

The prison is designed to house just over 600 inmates, but currently houses more than 900 men. Some 65 percent of the inmates are non-Italians, Vatican News reported.

At the end of the Mass, a prisoner publicly thanked Pope Francis for his visit and said the inmates would try to do, at least symbolically, what he recommended at his general audience at the Vatican the day before: celebrate Easter by splashing water on their eyes to look at the world with fresh eyes.

The 81-year-old pope responded by confiding in the prisoners that, like many people his age, he is developing cataracts and will have an operation next year to fix them.

But, he said, as life goes on and people get busy or make mistakes, they can develop “cataracts of the soul” that prevent them from seeing the world with the hope that is born of Jesus’ resurrection.
“Never tire of renewing your gaze, of having that cataract operation on your soul every day,” the pope told the prisoners.

He also insisted that jail time must be a time to prepare a person to return to society and live as good citizens and that the penalties for crime must be “open to hope.”

“There is no just penalty that is not open to hope,” Pope Francis said. “That is why the death penalty is neither Christian nor human.”

Pope Francis began his visit in the prison infirmary, meeting with prisoners there. After the Mass he was scheduled to visit the prison’s Section VIII, a protected area of the facility for inmates convicted of sexual crimes and other inmates who could be in danger in the general population.

The prison is less than two miles from the Vatican and is no stranger to hosting a pope celebrating Mass. St. John XXIII visited in 1958, Blessed Paul VI in 1964 and St. John Paul II went in 2000.