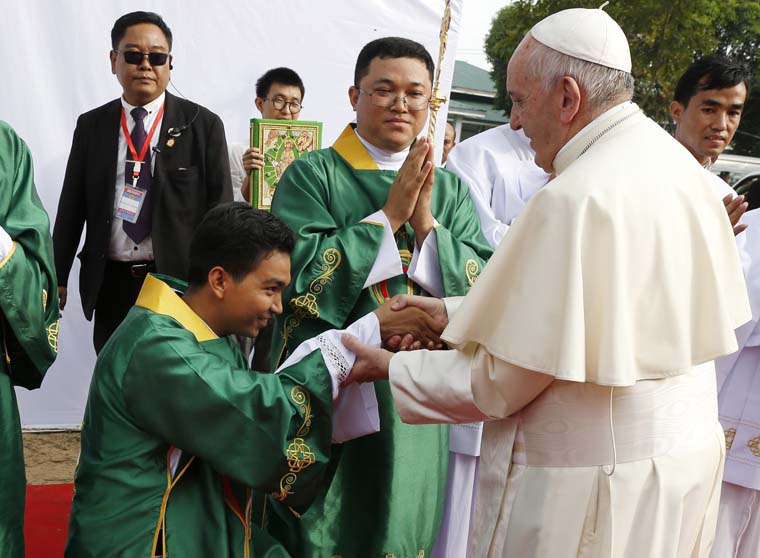 YANGON, Myanmar (CNS) — Jesus’ love “is like a spiritual GPS” that guides people past the everyday obstacles of fear and pride and allows them to find their way to a relationship with God and with their neighbors, Pope Francis said.

Christ’s message of “forgiveness and mercy uses a logic that not all will want to understand, and which will encounter obstacles. Yet his love, revealed on the cross is ultimately unstoppable,” the pope said Nov. 29, celebrating his first public Mass in Myanmar.

According to the Vatican, 150,000 people attended the Mass at the Kyaikkasan sports ground. Thousands of them had traveled hundreds of miles to be at the Mass, and many of them camped out on the sports field the night before the liturgy.

Pope Francis acknowledged the sacrifices made by the people as well as the struggles Catholics face as a tiny minority in Myanmar and as citizens of a country struggling to leave violence behind and transition from military to democratic rule.

“I know that many in Myanmar bear the wounds of violence, wounds both visible and invisible,” the pope said in his homily. “The temptation is to respond to these injuries with a worldly wisdom” or to think that “healing can come from anger and revenge. Yet the way of revenge is not the way of Jesus.”

Pope Francis prayed that Catholics in Myanmar would “know the healing balm of the Father’s mercy and find the strength to bring it to others, to anoint every hurt and every painful memory. In this way, you will be faithful witnesses of the reconciliation and peace that God wants to reign in every human heart and in every community.”

Father Francis Saw from St. John Cantonment Church in Yangon said he had 400 guests at his parish. “Many people came from the hill towns. I welcomed them and fed them and then they came here at 10 p.m.” the night before the Mass.

“We are very happy and encouraged by the pope’s visit,” he said. “It is good for our country and for our church.”

Some people had reserved seats close to the altar. “Every parish got some VIP tickets for those who are very involved in the parish, very poor or sick,” said Noeli Anthony, a ticket-holder from the Myanmar Catholic community in Perth, Australia.

Salesian Father Albert “Sam” Saminedi, pastor of the Perth community, said the immigrants he ministers to “love their country” and “are very strong, very loud and full of faith.” More than 100 of them traveled home to be with the pope.

The “VVIP” section at the sports field was reserved for government officials, diplomats and representatives of other Christian communities and other religions.

The Rev. U Chit Toe Win, chair of the Myin Thar Baptist Church and deputy chairman of an interfaith dialogue group in Yangon, sat with the Anglican, Catholic, Hindu, Buddhist and Muslim members of his group in the very front row.

Like any Baptist minister, Toe Win said, “I believe in Jesus first,” but “these are my brothers. We are for unity.”