Jesus shows that death is not the last word, pope says 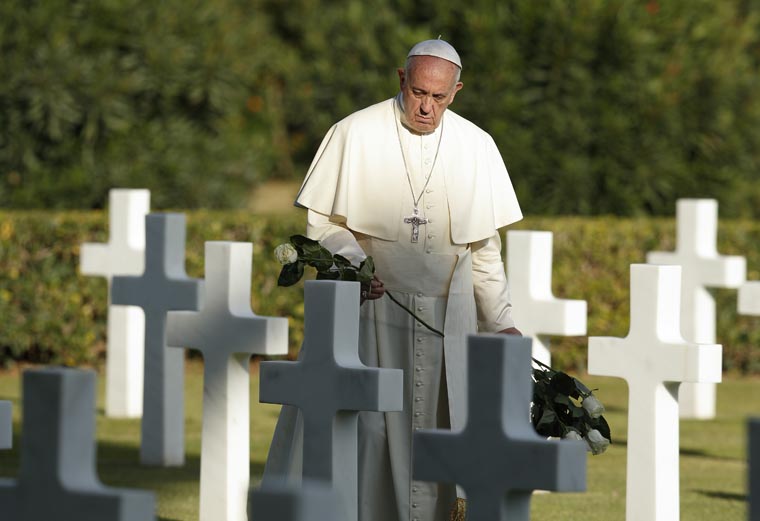 “God is faithful and our hope in him is not in vain.” the pope said in a memorial Mass homily Nov. 3.

Pope Francis celebrated the Mass in St. Peter’s Basilica in memory of the 14 cardinals — including U.S. Cardinal William H. Keeler of Baltimore — and 137 archbishops and bishops from around the world who died in the past year. Fifteen of the bishops were from the United States and two from Canada.

These pastors generously served the Gospel and the church, the pope said, and “we seem to hear them repeat with the apostle; ‘Hope does not disappoint.'”

“This hope, rekindled in us by the word of God, helps us to be trusting in the face of death,” he said. “Jesus has shown us that death is not the last word; rather, the merciful love of the father transfigures us and makes us live in eternal communion with him.”

In fact, he said, an essential characteristic of being a Christian is “a sense of anxious expectation of our final encounter with God” — an “expectant yearning” for his love, beauty, happiness and wisdom.

“The faith we profess in the resurrection makes us men and women of hope, not despair, men and women of life, not death, for we are comforted by the promise of eternal life, grounded in our union with the risen Christ,” the pope said.

Jesus accepted death to save those “who were dead in the slavery of sin,” he said. But because of his love, “he shattered the yoke of death and opened to us the doors of life.”

“By virtue of this divine bond of Christ’s charity, we know that our fellowship with the dead is not merely a desire or an illusion, but a reality,” Pope Francis said.