Joe Slavik, champion of those in need, retires 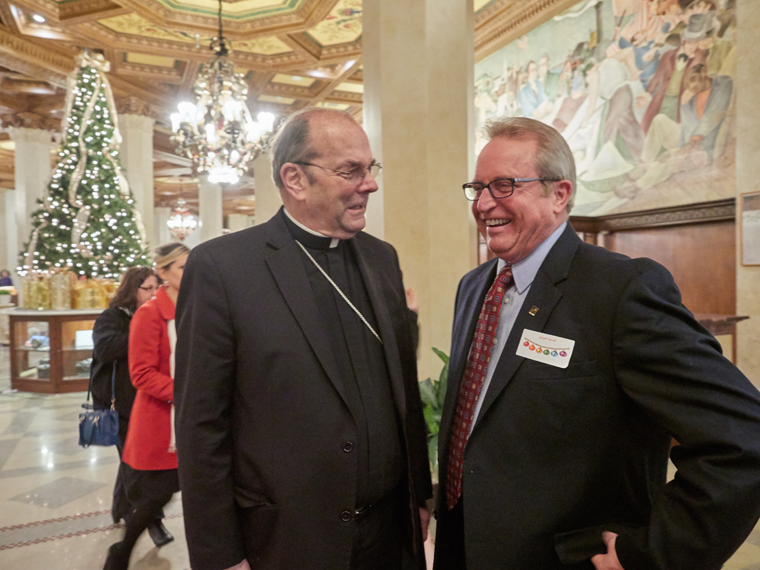 Catholic Charities CEO reflects on his 42 years with agency

At the diocesan yuletide gathering last week, Catholic Charities honcho Joseph G. Slavik said he has never met a microphone he didn’t like. With all the blessings he has received in his life, what’s to dislike?

Certainly not those in need. He has welcomed and helped them for many years, the last seven of them as the agency’s president and CEO. The oldest in a family of nine kids, he grew up in Binghamton and learned about charity from his parents and Msgr. Ronald C. Bill.

“I have no regrets,” Slavik said. “It’s been a wonderful journey for those 42 years.”

But, as he told the Catholic Charities Board of Trustees, “it’s time. It’s time for me to do something different.” Slavik will retire in a few days. A bubbly, inquisitive guy, he wonders how good his golf game will get when he gets to play it three or four days a week, instead of one.

But first he has to get through what he calls his “farewell tour,” during which he gets choked up thinking about the efforts of his area directors, their employees, and the approximately 200,000 people they serve every year with housing, medical, transportation, employment, training, and other assistance.

“Forty-two years of working for Catholic Charities; where do all the years go? I hope into the loving hands of God,” Bishop Robert J. Cunningham said at the diocesan Christmas party, which doubled as yet another stop on the Slavik retirement tour. “But he helped out thousands and thousands of people by feeding the hungry, giving drink to the thirsty, clothing the naked, sheltering the homeless.”

Earlier this month, Slavik said he didn’t want a “stuffy” retirement party. He didn’t get one; several speakers made sure of that.

On her first anniversary on the job, her boss said he would treat her to lunch. A gentleman approached Slavik holding his stomach and mumbled quietly, “Sir…I…I ain’t gonna ask you for much, honest. I’m just really hungry and I just gotta put some food in my stomach.”

Slavik put his arm around the man’s shoulder and asked: “Hey man, what’s your name?” Surprised, the man answered, “Bob.”

“Tell you what, Bob,” Slavik said. “Is there a place around here you like to get food?”

“Well, sir … there’s this place around the corner that got the best little cup’a mac and cheese.”

So Slavik bought the man a lunch and added a dinner for him to have later.

“And you’d think I gave the guy gold,” Slavik recalled. “He was so appreciative. He was hugging me and thanking me.”

Father John D. Manno would like to thank Slavik for his service but also for his laughs, even if sometimes they have to be suppressed.

For seven years, Slavik lived at the St. James Church Rectory in Syracuse five days a week, then drove home to Binghamton on weekends. Father Manno at the time was pastor at St. James and he often had dinner with Slavik.

One night, a visitor for dinner was an artist who was restoring a mural on the Cathedral emergency services building downtown. The artist had a plenitude of tattoos, and Father Manno, Slavik, and Father Christopher R. Seibt, who was a seminarian at the time, agreed that they would not mention the tattoos at dinner.

“I was just kind of curious, you know?” Slavik recalled. “Because everybody’s got tattoos, you know; a lot of sports figures have tattoos.”

He finally asked: “What’s with the tattoos?”

Father Seibt thought, “Here we go.” Father Manno, who as the youngest of 10 children has training in self-restraint, also maintained his composure. What they all got was a 20-minute exegesis on the tattoos, which told the story of the artist’s life.

“And I said, ‘Well, I appreciate it,’” Slavik recalled.

Father Manno agreed that the anecdote demonstrates Slavik’s irrepressible curiosity about other people and his sincere interest in their life story. Slavik did the same thing at food pantries, where he conducted surveys of what the clients really wanted so that the food on the shelves would not be wasted.

“His personality is one of, let me engage the person, let me get to know them,” Father Manno said.

“He really does have a curiosity about people, which leads to a deep care and concern for them,” Father Seibt said.

Slavik developed that curiosity early. His father, George, worked in a shoe factory and wound up as a lieutenant colonel in the Army Reserve. He also volunteered a lot at church, including   service as lector and usher. But the family didn’t have a lot of money, and George’s wife, Elsie, made sure that the big family was fed every day. Occasionally, George would bring home a homeless person to have dinner. These people would be introduced to the nine children as “Uncle Tom” or “Aunt Suzie.”

“Obviously,” Slavik said, “I attribute my sensitivity to people and their needs to my upbringing.”

Slavik also realized that a monsignor is a good person to chase if one is on a mission of bringing some good into the world.

Msgr. Bill is now based at the Immaculate Conception Rectory in Fayetteville. He fills in for other priests there, and wherever else he is needed. But early in his vocation he was the director of Catholic Charities of Broome County. On his first day in Binghamton, he was called to anoint Slavik, then a teenager suffering from double-pneumonia, in the hospital.

The monsignor visited him multiple times, and Slavik recovered after spending a month and a half in the hospital. The two got along great, and when he was only 19, Slavik started coaching CYO basketball.

When he was in his 20s, Slavik moved to Elmira, 60 miles west of Binghamton, with his new wife, Peggy, in order to run a bank office. About four months into his stint, Msgr. Bill called saying he wanted to hire Slavik as Catholic Charities’ director of youth services. The only two caveats were that the salary was $2,000 less than what he was making in Elmira, and he would have to raise the money for his salary himself.

But Peggy’s father had died, and she really wanted to get back to Binghamton to be with her mom. So Joe took the job in January 1975. He did it for five years, and then Msgr. Bill was promoted to the Syracuse-based job of CEO and president of Catholic Charities.

And in October 1980, Slavik was hired in Msgr. Bill’s old job of director of Catholic Charities of Broome County.

“I’ll never forget that,” Slavik said. “That was a great day.”

It was also great in January 2010 when Slavik moved into his current job.

When Slavik was a little kid, Msgr. Bill “never thought he would follow me in all my jobs,” but he’s glad it worked out that way.

“We always hired him because he had a wonderful personality,” Msgr. Bill said. “He could talk and be with anybody, any race, any station in life. He had no trouble relating to anyone. And his personality made you feel that he liked you. … Primarily, he was a good administrator. He was a good boss. Good combination. … Good job, big job.”

Joe and Peggy have two children, Kylie Beth and Nathan, and now they will have the time to visit them, travel, and play golf. Peggy, who retired from Binghamton University in May, intends to take up the sport.

With Joe away during the week, Peggy went out and got two puppies that she trained to greet anyone with the excitement with which they greet Joe when he comes home.

“Oh, yeah, but you don’t know about my tattoo. My angel.”