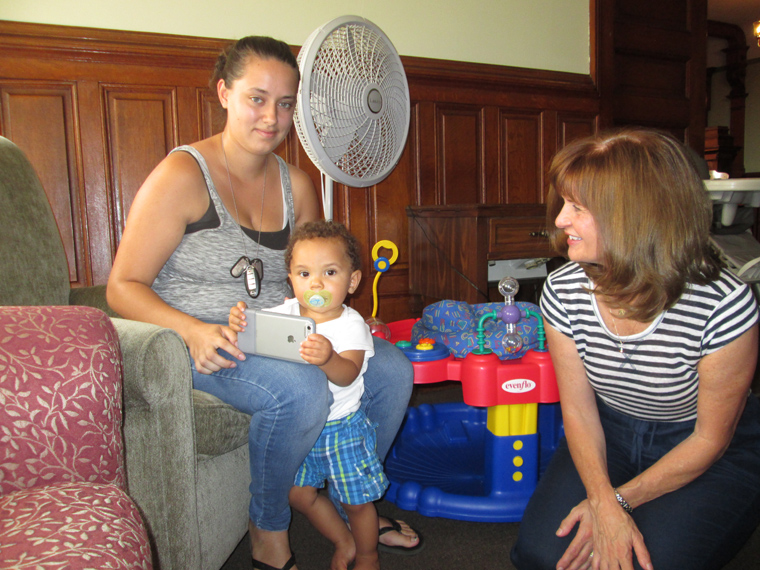 The “Lullaby Celebration” will be Oct. 6; the little reunion was Aug. 24.

Joseph’s House for Women in Syracuse, a “nurturing home for mothers facing an unplanned pregnancy,” depends 100 percent on private donations. It expects to draw a crowd of 500 people to Drumlins Country Club for its Oct. 6 fundraiser: “A Lullaby Celebration: A Good Night for Joseph’s House.”

Kitty Spinelli, co-founder of Joseph’s House with Maria Miller, is busy preparing for the gala, but she always makes time for former residents who come back to visit.

Aubrey Wright, 22, lived at Joseph’s House for about a year. She came back to visit last week. The story of Aubrey and her son, Joziah, 11 months, symbolizes why Spinelli considers Joseph’s House to be so critical for moms 18 and older.

Aubrey, who lives in Baton Rouge, La., now, came to Joseph’s House in 2014 when she was 4½ months pregnant.

“It must have been a God thing,” she said.

Her grandmother had instructed her to go to New Hope Family Services, where she learned about options of adoption and services that could help with the baby. Joseph’s House popped up in the discussion, and they gave her the phone number.

She called, and Spinelli answered. Aubrey came over and took a tour, and then she became a resident. She had baby Joziah last Sept. 23, and they both became Joseph’s House residents.

“That’s why I say it was God,” Aubrey said. “If one of those things didn’t happen, I wouldn’t have been here.”

What would have happened then?

“I don’t know,” she said. “Everything happens for a reason.”

While she lived at Joseph’s House, she went to school during the day and delivered pizzas until late at night. Her schedule was demanding, so she had to boost her communication skills; the home has a curfew, and the moms have to be in for dinner.

“She was very motivated,” Spinelli recalled. “She wanted to get her life on track, and she did all the right things to do that.”

Joseph’s House advertises that it offers “access to resources including educational, occupational and spiritual in the Catholic tradition, giving them the opportunity to achieve their God-given potential.”

“They helped us a great deal,” Aubrey said. “When I had to go to school, the

daycare watched him for me. When I had to go to work, the daycare was there. Everybody who worked here: fantastic.”

Any time she needed diapers or wipes for Joziah, Joseph’s House assisted.

“I don’t know what I would have done without them,” Aubrey said. “I mean, it’s not just the house itself; it’s the people that work in it that makes it all flow.”

“She’s a terrific mom,” Spinelli said, “and she bonded well with him [Joziah]; and I hope a lot of that is from example, but I think a lot of it was just her nature. She’s a shining example of what can work well when somebody follows God’s path for their life.”

Who knows what a baby can remember? But as Aubrey spoke, her son wandered around the room as if he were thrilled to be back “home.” He spun rattles, grabbed anything he could, and bounced up and down in a baby contraption to the point where he appeared to be testing the limits of its shock absorption.

Aubrey and Joziah were up here for her grandmother’s wedding. They intended to go back to Baton Rouge, where Aubrey has a fulltime job, with benefits, at an auto-parts store.

She served time in the army as a military police officer, and she is studying for the civil service test to become a Baton Rouge police officer.

Spinelli calls such visits “a great blessing, because we know we’re special to them.”

In the 2½ years that Joseph’s House has been open, it has offered its special services to more than 60 moms and babies. Right now, it is home to seven moms and eight children, with a few babies on the way.

“And we have several moms, like Aubrey, who are out doing very well on their own after this program,” Spinelli said. “So that’s what keeps us going.”

The ticket price is $60 per person. There will be silent and live auctions, a 50/50 raffle and bag raffles, and the winners will be drawn for the vacation and lotto board raffles. Dress is business casual.

The money from the gala is even more important, because Joseph’s House is striving to improve follow-up with moms once they leave. Also, there is a new case manager and a new house manager.

“We’re planning for the future, thinking that perhaps we need to expand our day care to assist moms after they leave the house,” Spinelli said.

These are vibrant times at Joseph’s House; after observing baby Joziah, one might even say it’s bouncy.