At home at Joseph’s House 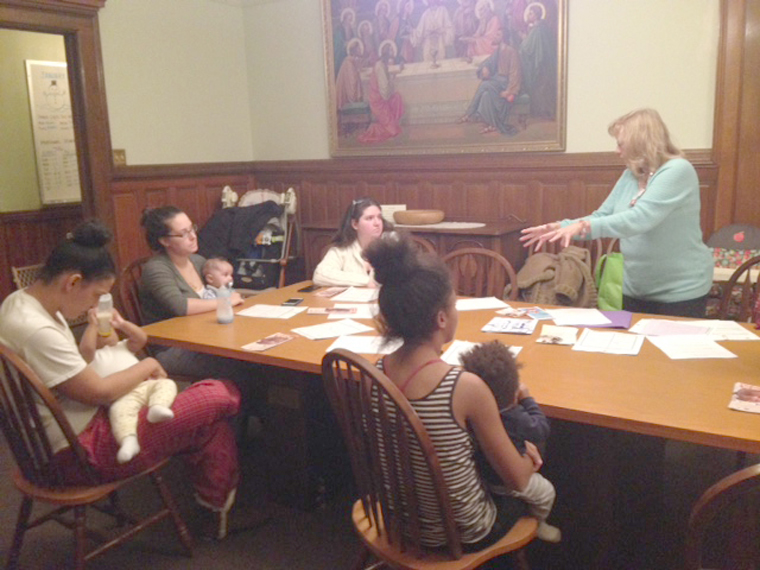 On a recent frigid night, the smell of a homecooked dinner lingered in the air of the kitchen at Joseph’s House. Mothers were gathered around the long dining room table, chatting before the evening’s life skills class began. Upstairs in the daycare rooms, volunteer sitters cared for little ones, one toddler smiling broadly as she played with a toy shopping cart. All in the handsome, spacious home on Syracuse’s North side felt cozy, comfortable, homey.

Joseph’s House, a home for mothers facing unplanned pregnancies, opened in March of 2014. Founded by Kitty Spinelli and Maria Miller, it is a place where moms in need can find physical, emotional and spiritual support.

Spinelli said she was called to open the house, though she had no idea how to do it. She put it all in God’s hands and prayed for the right people “and every little prayer was answered,” she said. The house blossomed “because it’s God’s will, not because of anything I could ever do,” she added.

Originally conceived as a home for homeless pregnant mothers, Joseph’s House also welcomes homeless moms with small children as space allows. But the vision and mission of Joseph’s House is much bigger than the house itself, Spinelli said. “It’s about getting God’s message across and getting God’s hope and the plan he has for us across to others, so that they’ll step out and figure out what God wants them to do,” she said.

As Joseph’s House’s second anniversary approaches, more than 50 women and their children have found a home there. The house can accommodate up to nine mothers and their children at one time, Case Manager Danielle Cornia explained. Referrals come from a variety of sources, including local homeless shelters, hospitals, and direct inquiries. Five moms and their children — an 18-month old, a ten-month old, a six-month old, and two almost 4-month olds — are living at the house at the moment, according to Spinelli.

There is no cost to stay at Joseph’s House, and free on-site daycare is provided. There are some rules, however.

“There is structure here, there are expectations,” Cornia said. “It’s not just a place where you come and bide your time. We want you to grow as a person, spiritually, financially, as a mom. It can be hard work.”

Residents are expected to work, continue their education or volunteer at least 30 hours per week. They must keep their private bedrooms clean and share the daily chores around the house. There’s a curfew each evening. Residents make their own breakfasts and lunches, and they gather for a family-style meal at 6 p.m. Mondays through Thursdays; each resident takes a turn cooking during the week. After dinner, they attend a life skills class on a range of topics, from money management to meal planning to compassionate parenting.

The structure can be tough for some moms, Cornia acknowledged, and some end up leaving. But “even if you leave, the door is always open for you to come back, no matter what. It’s family. We’re your family,” she said.

Staff resident advisors provide support to the residents 24 hours a day, while a house manager oversees operations and Cornia works with each mother on a personalized plan. Volunteers provide childcare during the day and during evening life skills classes. Still others tend the house and grounds and help to raise money.

Joseph’s House is 100 percent privately funded, Spinelli said. The projected budget of $700,000 includes salaries for five part-time and five full-time staff and maintenance on the house, Spinelli noted, as well as $100,000 earmarked for an endowment.

Residents may stay at Joseph’s House for up to two years. To date, some moms have stayed for just a few days in emergency situations, while others have stayed for several months, Cornia said.

Aubrey Wright, 22, came to Joseph’s House when she was five months pregnant. Her son, Joziah, is now almost four months old. She proudly shows off photos and videos of her chubby-cheeked boy, who has a huge smile and is such a flirt, she laughed. Wright is working toward becoming a cop, she said, and she has plans to move on from the house within the next few weeks.

Living at Joseph’s House has presented some challenges for Wright. While “everybody gets along with everybody here now,” Wright also spoke of previous residents who were “questionable.” And having a curfew and not being able to go out is “very frustrating; it’s hard to get used to,” she said.

Wright highly recommends the home to other women, though. “This is an amazing, amazing shelter. If you have a kid and you’re in my situation, definitely come here because they help you, they try to work with you one-on-one to get you to where you want to be,” she said.

Those interested in volunteering at Joseph’s House should visit jhfw.org and complete the volunteer form. A donation “wish list” of items for the house can also be found on the website. Donations can be made through the website or sent to Joseph’s House, 1101 Burnet Ave., Syracuse, N.Y.  13203.