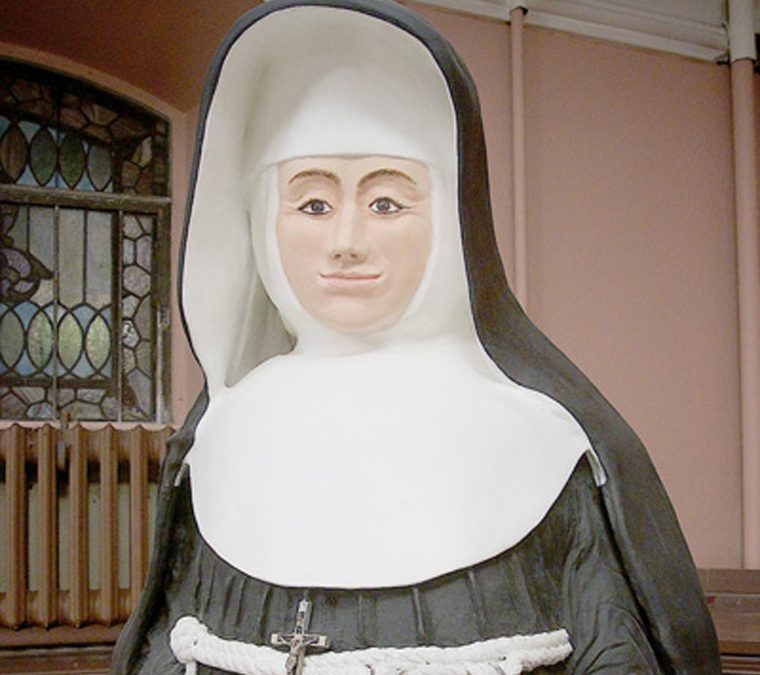 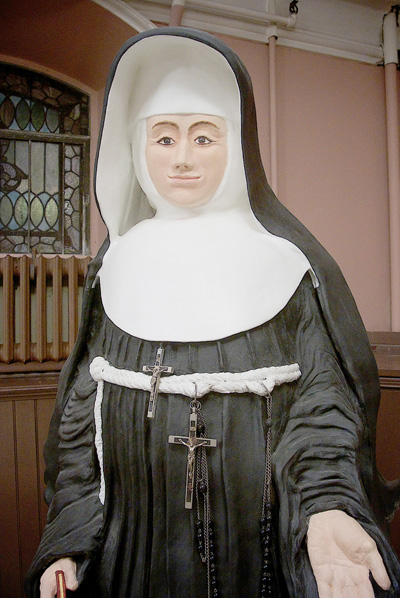 This statue of St. Marianne Cope stands in the grotto of the Franciscan Church of the Assumption in Syracuse. Photo Courtesy Chuck Wainwright.

It took 300 lbs. of clay and roughly five years of dedication, prayer and hard work, but local Syracuse artist Mary Ann Auricchio is more than pleased with the lifelike sculpture she created to honor St. Marianne Cope. The statue is currently displayed in the grotto at the Franciscan Church of the Assumption in Syracuse and has received great interest from parishioners and the public, especially in light of St. Marianne’s October canonization by Pope Benedict XVI.

A call from God

The idea for creating the statue sprang from an unlikely event that occurred in Auricchio’s life several years ago.

“I had gotten terribly sick with shingles,” explained Auricchio. “I was so sick and the blisters were so painful that I spent that summer in bed, convinced I was going to die.”

While convalescing, Auricchio began to read a biography of Mother Marianne Cope. “I was simply awestruck about her life and about the work she did with the lepers. Then I realized that I was like a leper. I began to pray to Mother Marianne and asked her to bring her nursing to my bedside.  Almost immediately, I began to feel a presence around me and I started to heal.”

As Auricchio’s healing progressed at a rapid rate, she felt God calling her to create a statue to honor Mother Marianne. “The circumstances just began to fall into place,” explained Auricchio. “I received a lot of help from my husband and from students and faculty at Syracuse University.”

A commercial artist by profession, Auricchio had never before desired to sculpt. But even as excitement grew with the creation of the statue, the process was not without its challenges.

“I had hurt my shoulder in a serious car accident just as I began working on the statue,” explained Auricchio. “Throughout the sculpting I was in constant agony. And then, once I finished the statue, I fired it incorrectly. After a tremendous amount of work, the final result literally turned to dust and I had to begin all over again.”

Despite the obstacles, Auricchio continued to press forward to complete the project. “I felt many times the Devil didn’t want this statue to be completed, but God had it preplanned,” stated Auricchio.

A home for the statue

Once completed, the life-sized statue of Mother Marianne Cope needed a permanent home. “I prayed that God would find the right place for the statue and also a way to move it to wherever it needed to go,” said Auricchio.  “God of course provided.”

Clergy from Assumption who had heard about the statue’s existence approached Auricchio. Not only did they want the statue, they provided a forklift to move it to the grotto without incident, where all who see it can now enjoy it.

“Timing was everything with this statue,” explained Auricchio. “From the moment I heard the call to create the statue until it was placed in the church, honoring Mother Marianne was all part of God’s great plan.“

A shrine beckons on Syracuse’s west side 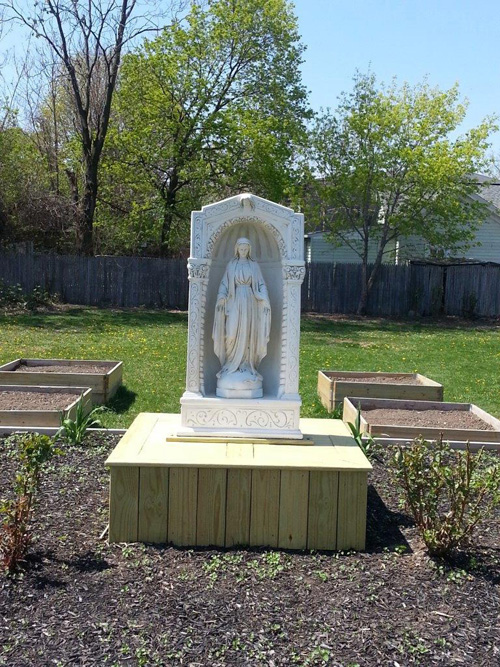 A shrine of the Blessed Mother stands in a public garden on Syracuse’s West side.

A shrine of the Blessed Mother has been erected in a public garden on Syracuse’s West side, illuminating the corner of West Belden Ave. and Van Rensselaer St.

Mary’s Garden was created in 2010. Since then, the shrine has brought a sense of peace and serenity to the city landscape.

The creation of the garden is the brainchild of Kitty Spinelli, a parishioner of St. Mary’s of the Lake in Skaneateles. “She [Mother Mary] sheds her protection over that area,” said Spinelli. “People that stop to see Her say they are grateful for Her presence and thank us for beautifying the neighborhood and making it nicer.”

Spinelli was inspired to create the place for reflection and prayer in 2010 when she participated in Adoration at Holy Cross Church in DeWitt on St. Joseph’s Feast Day. During Adoration, a woman she met mentioned that she was waiting for her car to be serviced. “In my heart I said to God,  ‘Wouldn’t it be great to have an Adoration chapel that people could visit while they were having their car serviced?’ That’s the beauty of Adoration — if you go in with an open heart and ask Him what he wants you to do, He will tell you. I just try to follow his plan.”

The rest is history.

After consulting her husband Michael, owner of Heritage Lincoln, a car dealership located on West Genesee St., Spinelli constructed the garden on a lot adjacent to the business.

“The garden has been a blessing in so many ways,” commented Spinelli. “The employees at our dealership have high pressure jobs — it gives them a place to go to take a break.”

Mary’s Garden started out on a small scale. Spinelli’s friends donated soil and boxes to grow vegetables and flowers. A small bust of the Blessed Mother was added to the garden.

In 2011, a larger statue of the Blessed Mother replace the original, after Spinelli’s friend and former pastor of St. Mary of the Lake Church, Father Darr Schoenhofen, suggested that the statue be erected. It was given a special blessing by Father Amedeo Guida, pastor of St. Cecilia’s in Solvay, in May of that year.

Today the garden boasts beautiful flowers and vegetables and is maintained by Spinelli and a number of employees from the car dealership. Spinelli is extremely grateful for their assistance. The employees water and weed the garden every day. Spinelli said she would like to add roses, hydrangeas and possibly some fruit trees to the garden plot.

Spinelli said that her husband has made improvements to the garden each year. For example, he mounted the statue on a pedestal and has planted vegetables.

Spinelli said that people often leave rosaries and flowers at the site of the shrine. She added that she has witnessed homeless people drop to their knees at the shrine.