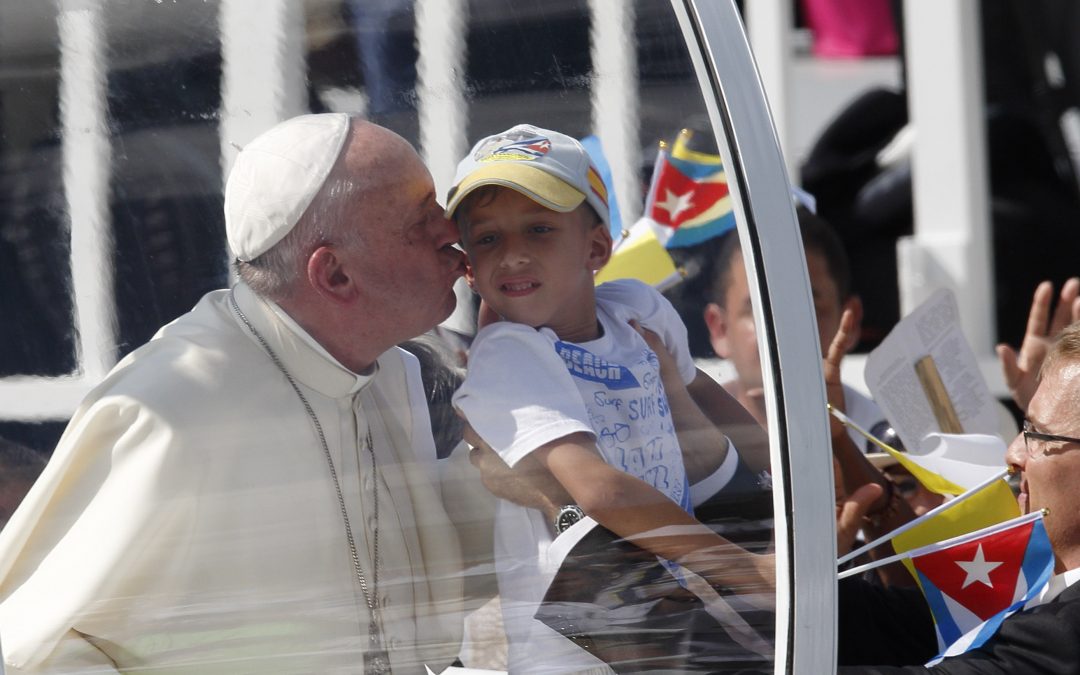 HOLGUIN, Cuba (CNS) — Celebrating the feast of St. Matthew, a day he considers a turning point in his own journey of faith, Pope Francis told thousands of Cubans that Jesus knows who they really are and calls them to walk with him.

Arriving in the eastern city of Holguin from Havana Sept. 21, the pope went directly to the city’s Revolution Square for the feast day Mass. People had the day off work and off school so they could attend.

The pope explained to the people in the square that Matthew was a tax collector for the Roman occupiers, which meant that he was seen as a traitor to be shunned. But Jesus “looked at him with the eyes of mercy; he looked at him as no one had ever looked at him before.”

“And this look unlocked Matthew’s heart,” the pope said. “It set him free, it healed him, it gave him hope, a new life,” just as Jesus’ merciful gaze gives new life to men and women today.

The story of St. Matthew’s call and conversion is one the pope talks about often. The feast day is the first day of spring in Argentina, a day students have free from school. It was the day in 1953 that a 17-year-old Jorge Mario Bergoglio felt a strange urge to enter a church and go to confession. He often recounts the story and his feeling that the priest in the confessional was waiting just for him; it was the beginning of his vocation to be a Jesuit and a priest.

When Jesuit Father Antonio Spadaro, editor of La Civilta Cattolica, conducted the first long interview with Pope Francis in 2013, the pope told him Caravaggio’s painting of “The Calling of St. Matthew” reminds him of himself.

“That finger of Jesus, pointing at Matthew. That’s me. I feel like him. Like Matthew,” he told Father Spadaro. “It is the gesture of Matthew that strikes me: he holds on to his money as if to say, ‘No, not me! No, this money is mine.’ Here, this is me, a sinner on whom the Lord has turned his gaze. And this is what I said when they asked me if I would accept my election as pontiff.”

Father Spadaro wrote that the pope then whispered in Latin the words he said to the cardinals: “I am a sinner, but I trust in the infinite mercy and patience of our Lord Jesus Christ, and I accept in a spirit of penance.”

Preaching under bright, sunny skies in Holguin, Pope Francis told the people, “Jesus’ love goes before us, his look anticipates our needs. He can see beyond appearances, beyond sin, beyond failures and unworthiness.”

Jesus, he said, sees “our dignity as sons and daughters, a dignity all of us have, a dignity sometimes sullied by sin, but one which endures in the depth of our soul.”

Pope Francis asked people in the crowd to find a quiet time at home or in a church to remember in silence and with gratitude an occasion when they felt that merciful gaze of Christ.

Jesus’ love, his mercy and his call to follow are also calls to love others, respect their dignity and show them mercy, the pope said. “Jesus’ love heals our short-sightedness and pushes us to look beyond, not to be satisfied with appearances or with what is politically correct.”

Pope Francis asked the crowd to practice gazing upon Jesus in the Eucharist, in confession and “in our brothers and sisters, especially those who feel excluded or abandoned. May we learn to see them as Jesus sees us.”

Contributing to this story was Rhina Guidos in Holguin.