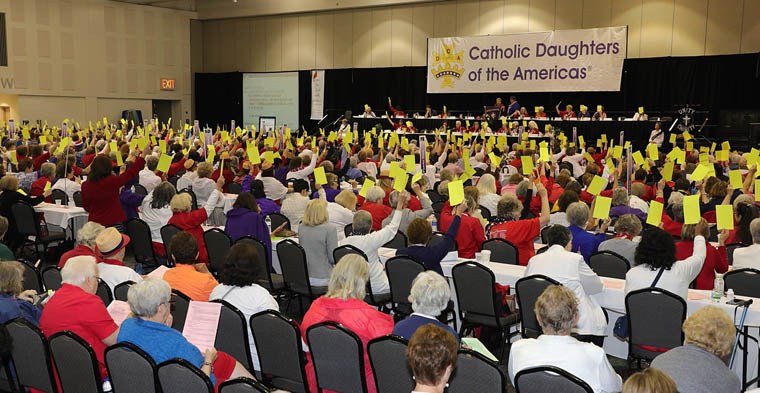 SIOUX FALLS, S.D. (CNS) — Camaraderie, learning, new leadership and the sacred were in sharp focus at the Catholic Daughters of the Americas 57th Biennial National Convention in Sioux Falls.

“When a person dies, we often say ‘may they rest in peace.’ But we only need true rest — the eternal rest that God alone can give — when we have exhausted ourselves in the service of the Lord,” said Father Shenan Boquet of Human Life International in his keynote speech.

“To achieve that eternal, peaceful rest,” he continued, “you must remember that in everything you do, you represent the Lord. And also remember that there will never, ever be another you. You are unique and you are sacred.”

The sacredness to which Father Boquet referred was present during business meetings, discussion of bylaws and amendments, workshops and voting sessions. There were patriotic, memorial and vigil Masses and daily adoration and benediction. The sacrament of reconciliation was available. The chapel remained open for prayer, reflection and silent communication with God.

The priest’s keynote came on the second day of the July 17-22 convention.

Sacredness was especially visible during the installation Mass at the Cathedral of St. Joseph when the 14 newly elected national board members — five national officers and nine national directors — took their pledge of office in a beautiful white candle and red roses ceremony.

The Catholic Daughters — catholicdaughters.org — were formed in 1903 and now have 66,000 dues-paying members in 1,150 courts (local chapters) in 45 states, Puerto Rico, Mexico, Guam, the Virgin Islands, Peru and Kenya.

“They have added 38 new members since they were formed two years ago. Catholic Daughters play pivotal roles in Kenyan parish life and have committed themselves to preaching peace to the local tribes,” Seyfried said.

In her workshop titled “Speak Up for the Culture of Life,” Margaret Sitte, who is national legislative chairman, talked about how the Trump administration “has reversed course from the previous administration in so many important ways” on life issues.

She pointed to president President Donald Trump’s reinstatement of the so-called “Mexico City Policy” a couple of days after his inauguration. “(It) is back in place prohibiting $9 billion in foreign aid from being used to fund the abortion industry worldwide. The HHS (Health and Human Services) mandate that forced Little Sisters of the Poor and others to provide contraception, abortion and sterilization as part of health care has been repealed.”

Sitte explained that through Operation Morningstar, the Catholic Daughters tries to project a Catholic voice in the public square, speaking only on issues, not endorsing candidates or political parties.

“The positive energy from Washington seems to be spreading to the states where a groundswell of pro-life laws has recently passed. More pro-life victories have been won in the past 18 months than ever before,” she added.

Another challenge addressed during the convention was planning for the future by encouraging a younger generation of women to become members.

“We were group and association joiners but the younger generations don’t tend to join organizations,” he said. “Of course, some do join, but in general their reluctance is not an urban myth. They join meet-ups. They join other people. They join their friend who says, ‘I need you to come.'”

Father Maurer added, “We must be welcoming and make our courts a home. Don’t save a seat for a friend at an event! This is cliquish and creates barriers. If you are saving a seat and a new person asks, ‘Who’s sitting here?’ tell them warmly, ‘You are. Welcome to the Catholic Daughters!’ Your friend will surely understand.”

Newly elected National Regent Olga Samaniego agreed. “I believe we need to be better about inviting and explaining who we are and make sure that each court’s program is meeting the needs of the membership. There is an old saying, ‘You can’t give what you don’t have.'”

Samaniego, who for the previous two years was national chairman for membership and court Development, added: “I am finding that many young women entering CDA are joining for two reasons –one is the opportunity to serve and to be useful to others; the other is that they are hungry spiritually and are interested in finding a way to come closer to God.”

“We need to make sure our membership has the opportunity to know God more fully so that they can serve more joyfully,” she added.