Lent in the time of coronavirus: More prayer and unexpected penance 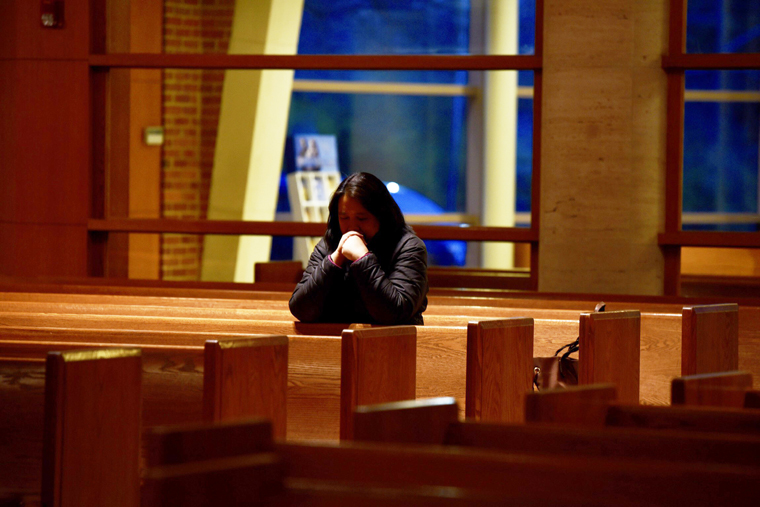 WASHINGTON (CNS) — This Lent is one for the record books.

Parish fish fries, prayer services, Stations of the Cross, and daily and Sunday Masses are all canceled, and some dioceses have already announced they will not have services during Holy Week or Easter on April 12.

At the Feb. 26 start of Lent on Ash Wednesday, Catholics were filling churches in the United States to receive ashes. At that point, only people arriving at airports from China were being screened and there were 60 cases of the coronavirus in the country, primarily from more than 40 passengers who had been on a cruise ship.

The first Sunday of Lent was business as usual, but by the second week, some dioceses had urged parishes to curtail hand-shaking at the sign of peace and Communion from the chalice. By the next week, many dioceses were no longer having public Masses and that list continues to grow as a nation is advised to stay at home to curb the spread of the coronavirus.

And now, with many public places shuttered and a country practicing its new term of self-distancing, the sense of quarantine, although not fully imposed, is very real.

This year’s Lent may not be normal, but many have pointed out that the penitential qualities tied to this health crisis — suffering, giving up and solitude — are in fact symbolic of Lent’s spiritual practice of self-denial.

Even the very word, quarantine, means about 40, in French, and its Latin origin, “quadraginta,” is the root of Latin words for Lent.

This symbolism is not lost on many.

Paulist Father Larry Rice, director of the University Catholic Center at the University of Texas at Austin, said a number of people have compared the notion of quarantine to Christ’s 40 days in the desert and the 40 days of Lent.

“We need to look at this as a temporary thing we are doing for the sake of another good,” he said of the current time of staying in place to prevent coronavirus spread, adding that it could be viewed as a period of retreat with extra time for prayer or spiritual reading.

And Father Paul Keller, a Claretian Missionary priest, who is serving at St. Paul Catholic Newman Center Parish in Fresno, California, which is currently under a shelter-in-place order, called the current situation “our opportunity to be in the desert like Jesus, with time away in solitary prayer,” which he described as something that “couldn’t be more Lenten.”

With the halt to normal routines for many, Bishop Frank J. Caggiano of Bridgeport, Connecticut, pointed out that “at a minimum, we now have extra time to spend in prayer each day — prayer that is sorely needed to seek eternal repose for the dead, to remember those who are sick and living in great fear, our health care workers who remain on the front lines of this disease, and for one another.”

“We may never again have a Lenten season that affords us so much time to give to the Lord. Let us use this time wisely and well,” he posted on Facebook March 17.

Along with extra time to pray, the current pandemic also offers a heightened perspective.

Sister Constance Veit, a Little Sister of the Poor, who is director of communications for her order, wrote: “We began Lent with the imposition of ashes and the reminder, ‘Dust thou art and unto dust thou shalt return,’ a phrase borrowed from the Catholic funeral liturgy. None of us could have predicted how quickly we would become so focused on the finiteness and fragility of human life — this is one of the spiritual lessons of the coronavirus.”

The challenge imposed by the spreading virus also contains a built-in penance that no one asked for and has caused some people to ask on Twitter if they still have to give up what they were going to for Lent.

These initial sacrifices were made prior to the country’s complete shift to the point where everyone is giving something up from mundane items to time with friends and family at public places and the far more tragic losses of jobs and health.

In a Twitter post March 13, Father Mike Schmitz, a popular evangelist, wrote, “How to do Lent right in the midst of things like #coronavirus,” and linked his video stressing that Lent is a time to embrace both personal penances and “penances that choose you,” which he didn’t name but referred to as some type of suffering.

“These weeks offer challenges we’ve never had to face. We can’t attend Mass. Our routines are disrupted. We worry about ourselves and our loved ones. Some of us may even need to fight the virus itself,” wrote Msgr. John Enzler, CEO of Catholic Charities of the Archdiocese of Washington, in a March 19 column for the Catholic Standard, the archdiocesan newspaper.

The priest added this pandemic “makes the current Lenten season dramatically different from any other in our lifetimes, no matter how old we are,” but he also emphasized Lent remains what it has always been: “A time to get in better touch with God’s love for us and do our best to ‘spring clean’ our souls in preparation for the glory of Easter.”

“This year, ” he added, the liturgical season has “also become a time to think about how we live as a community, protect each other from illness, and be part of the solution to a global health crisis.” He also was hopeful Catholics would “meet these challenges, and maybe even bring about new and better ways of taking care of each other in the years to come.”