Lenten staple prompts a grammar debate: Are they fish ‘fries’ or ‘frys’? 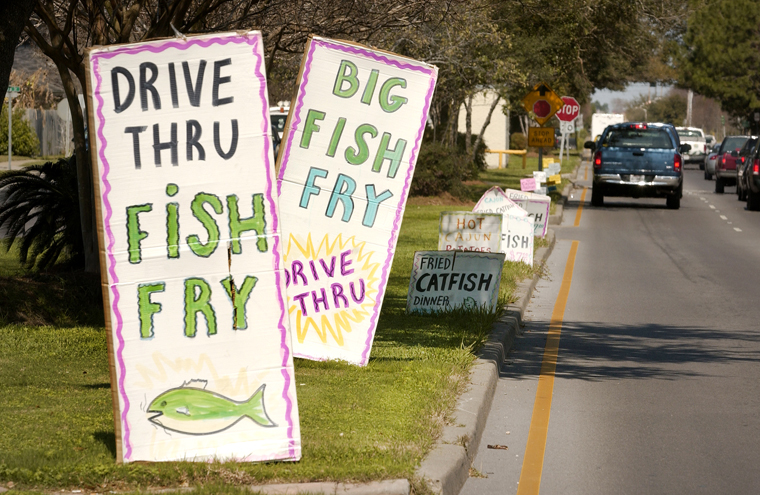 So is the salvation of many a harried Catholic couple with three or four mouths to feed on a seafood-only Friday night — the parish fish fry.

The fish fry has become a savory staple of parish fellowship. All in good fun, and in the advancement of culinary civilization, many parishes in the Archdiocese of New Orleans have embarked on a seafood arms race that would require drones with infrared cameras to monitor properly.

What used to be fairly simple fare — one piece of fried catfish, a couple of scoops of potato salad and a dinner roll — has evolved into delights more suited for silver-platter covers than for Styrofoam.

Seeking repeat business and word-of-mouth promotion, some parishes vary their menus each Friday of Lent, providing alternating options such as shrimp and okra, blackened catfish, shrimp and grits, shrimp pasta Alfredo, crab and corn bisque, and, for the healthy eater, even grilled redfish.

The fish fry also brings to mind an esoteric grammar lesson — really, a pitched battle where semicolons, ampersands and the Oxford comma are flung into the sky like arrows – regarding the proper usage of the plural of fish “fry.”

Inquiring minds – especially Catholic newspaper editors during Lent — need to know: Should the headline of their calendar-of-events listings be fish “fries” or fish “frys”?

This grammar battle brings to mind a favorite inside joke about the church.

Question: What’s the difference between a liturgist and a terrorist? Answer: You can negotiate with a terrorist.

A grammarian shares a liturgist’s DNA. There are rules to be followed, even when both possible answers look wrong.

First, let’s dispense with what we know the plural of fish fry is not. Anyone who uses fish “fry’s” — where the apostrophe somehow tricks the brain into believing a possessive is a plural — is hereby required to repeat third grade with Sister Mary de Lourdes, for whom the improper use of an apostrophe would bring on a case of apoplexy.

Normally, in tough cases of grammar usage, editors rely on The Associated Press stylebook, which, of course, is conspiratorially silent on the plural of fish fry.

Often, it’s helpful to Google the two competing versions — in this case, “Is it fish fries or fish frys?” — and then see what pops up. When the replies come up 50-50, that’s about as helpful and accurate as flipping a coin.
That’s not a good answer.

He worked for The Times-Picayune daily newspaper in New Orleans in the 1980s and then for New York Newsday on Long Island for 16 years. His dad used to work at the family restaurant — Martin’s Po-Boys.

“We ate fish a lot on Fridays, but there was all manner of stuff — fried fish, fish sticks and French fry po-boys,” Martin told the Clarion Herald, newspaper of the Archdiocese of New Orleans. “We would eat the French fry po-boys without the stuff that makes them great — the roast beef gravy.”

Martin knows po-boys. He also knows poor grammar. Realizing the culinary history of New Orleans rested on the answer to the plural of fish fry, he embarked on a serious investigation.

“It’s one of those things that doesn’t look right either way,” Martin acknowledged. “I really had never thought about it before. We had Zatarain’s fish fry in the pantry at home, but I never thought of the plural.”

So, the next thing he’s been trained to do is to go to the Journal’s official dictionary — Webster’s New World. The online version did not make the answer “obvious,” so Martin then went to item No. 3 on his checklist hierarchy — the hardbound volume of Webster’s.

“Usually, what happens in this business is that somebody gets frustrated because we’ve spelled a name like ‘Gaddafi’ many different ways, so someone says, ‘Please, come up with one way to do it.’ Then ensues a great Talmudic debate, and eventually a board of rabbis rules, and there it is.”

Martin will be happy to learn he has even one more semicolon in his grammarian’s quiver.

David Robinson, an executive of the Linguistic Society of America, which will meet with its 1,200 members in New Orleans next January, says the “Learner’s Dictionary,” another Webster’s product, identifies the plural of fish fry as “fish fries.”

Undoubtedly, the “fries” vs. “frys” debate will roil on at 350 degrees for decades.

In the meantime, before the next ecumenical council weighs in, enjoy your catfish — fried, broiled, paneed or baked.
Fish: It’s what’s for dinner.