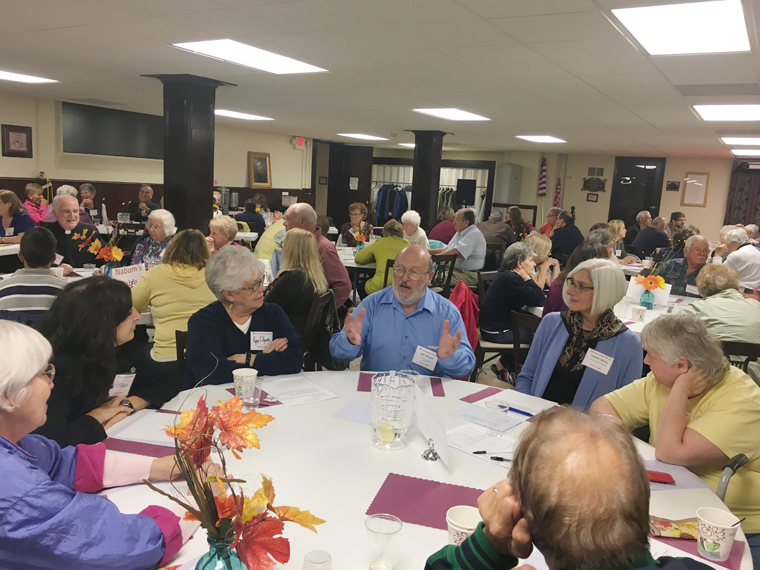 On a cold and dark Wednesday evening, in the thick of the work week and the Christmas season, the parish hall at St. Cecilia’s in Solvay was bright and bustling, full of conversation and laughter and fellowship.

It seemed the group of about 150, divvied up into tables of 8 or 10, had known each other forever. The smiles were genuine, the ribbing gentle, the sharing heartfelt.

How did these parishes, with long histories and memories, overcome the challenges of linkage to bring a new, vibrant energy to the faith community, and invite others to be a part of it as well? It started by bringing people to the table.

“We were looking for something that would really bond the two parishes,” explained Mike Alberts, pastoral council member and head of the logistics committee and Master of Ceremonies for the sessions. “This [Discovering Christ] seemed like the right tool to do it.”

Discovering Christ is a seven-week evangelization series “that invites every person, baptized or unbaptized, to encounter the love of God the Father, enter into or renew a personal relationship with Jesus Christ, and be empowered by the Holy Spirit to live as God’s children,” christlife.org explains.

The first of three programs in the ChristLife evangelization series, Discovering Christ gathers participants for a shared meal, prayer, teaching, and small group discussion, and tackles big questions: What is the meaning of life? Why does Jesus matter? What does Jesus want us to know?

With the support of a McDevitt evangelization grant through the diocese, SCC and OLOP decided to offer the program after consulting with other parishes, hosting a training session, and offering “trial run” sessions during Advent and Pentecost.

All 12 members of the pastoral council for the linked parishes, along with pastor Father Joseph Clemente, played major roles in the undertaking, from planning, to working as subcommittee chairpersons, to cooking and serving the meals, to serving as small group facilitators, noted Lori Rolince, who is pastoral council secretary, a parish staff member, and head of registration for the series.

The group decided to make a few tweaks to the prescribed program.

First, the location would change weekly, alternating between the campuses of OLOP and SCC, so that everyone would feel welcome. A free bus shuttle service would be offered between the non-host and host campuses for those who couldn’t or didn’t want to drive.

Parishioner Mark Kolakowski was behind the wheel of the bus; having retired several years ago as Town of Geddes Highway Superintendent, he now drives buses for the Solvay Union Free School District. He volunteered his time and secured the donation of the use of the bus from the school district. He regularly ferried about a dozen people back and forth for the sessions.

A parish lector, Eucharistic minister, and usher, Kolakowski considers giving back to be his ministry. But sit through weeks of a scripture series? “I’m not that guy,” he said. He wasn’t even planning on attending the Discovering Christ sessions, but decided to just go in “and see what’s what” the first night. Fast forward a couple of weeks, and Kolakowski was thinking, “This is pretty cool,” he said.

“We felt that the live presentations would be more effective,” explained Ed Weber, pastoral council facilitator and small group facilitator. That hunch turned out to be right; he cited the example of Deacon Falge’s presentation. The deacon incorporated his experience as a police officer into his talk and “people were wholeheartedly listening to him,” he said.

Organizers put together a creative and comprehensive advertising blitz to promote the program: Some 5,000 invitation postcards were sent to all the homes in the surrounding 13209 and 13219 ZIP codes. Father Clemente spoke about the program from the pulpit and the Discovering Christ prayer was prayed at Mass. Bulletin notices urged people to attend. During “invitation weekend,” Rolince explained, invitations were passed out to parishioners at each Mass. They were encouraged to take as many as they liked, and to use the invitations to ask friends or family to join them at the sessions. During “kick-off weekend,” there was a special treat, said Betty Hommel, music minister and retreat chairperson: apples, packaged with a note, distributed to parishioners at the end of Masses as a tangible reminder and encouragement to attend.

The full-court press paid off. The first night, the parish hall was set up to seat just over 100 people, said Tony Modafferi, pastoral council vice chair and logistics team member. Before the session started, “we took one table down because we said won’t need it,” he recalled, but “we had to put that back up, plus another. It was pleasant to see that.”

Over the following weeks, about 140 to 150 people participated in each session. There were regular, longtime parishioners, but also “parishioners you hadn’t seen in some time… grandmothers who brought adult grandchildren, [and] folks who don’t belong to the parish,” Rolince said. Attendees came from the neighborhood as well as Phoenix, Baldwinsville, Clay, East Syracuse, Weber said. The organizers intentionally arranged the small groups so that each table had a mix of folks from each of the parishes and the community.

Attendee Debbie Morrell has been a parishioner of St. Cecilia’s for 53 years; a graduate of the parish’s grammar school, she also taught physical education there for three years. She read about Discovering Christ in the parish bulletin, and “my mom mentioned she would like for me to go with her,” Morrell wrote in an email. “I thought that it might me a good thing for me to attend, not for her but for myself.”

Morrell is an assistant coach for the girls basketball team at Bishop Ludden Jr./Sr. High School and originally thought the team’s schedule would mean she’d only be able to attend the October sessions. Fortunately, she only had to miss one session.

“Since attending the sessions, I feel I have renewed and rediscovered my faith,” she said. “I have met parishioners that I never knew through the group interaction after the speakers, and found we all have a common goal of being better disciples of Christ. The speakers were very enthusiastic and inspiring. Father Clemente was our table facilitator and I enjoyed the ‘round table’ discussion, with his guidance and counsel. I have reconfirmed to myself that God is willing to accept and love us for who we are, but encourages us to be better Christians. I have found I need to strengthen my relationship with him.”

Adam Eichelberger, the parishes’ youth minister and a small group facilitator for the sessions, said he saw profound changes during the series.

“As soon as we started addressing the Holy Spirit, I really saw this huge shift,” he said. “There were these tiny, incremental shifts about being more open and trusting and accepting God, but when we started talking about the Holy Spirit, it just kind of blew up. People became so open and so willing to really consider letting God be a part of their everyday life and everyday things that they do.”

“The really cool thing to me is not only the internal spiritual change that it’s fostering in people, but [also] the external movement of generosity,” he said.

Organizers saw and felt the same shifts as well.

Alberts said the experience brought him “closer to the members of the linked parish” and “the great speakers, the deacons and priests, really bring home the spirituality.”

Rolince reflected on “the dynamics of the evening. Up in the church, with Betty and Father leading us with song… to see those pews packed and the intent look on those faces — that’s very powerful and moving. And then to have them go downstairs [for small group discussion] — and that room is just alive with conversation and laughter.”

Father Clemente praised Discovering Christ and said he was thrilled with the response to it.

The ChristLife series is “imbued with good Catholic theology,” he said. The three programs are “progressive and non-threatening, yet at the same time compel people to commitment.”

“You can know everything about the Catholic Church, but if you don’t believe, it’s only knowledge, it’s only a rational construct. What happens in Discovering Christ, is it creates a conversion climate, and that’s what has been necessary for people to take that next step,” he added.

So what’s next for the fired-up faith community? Organizers are working on plans to offer Following Christ, the second program in the series, in the fall.

“We want to keep the momentum going,” Alberts said.