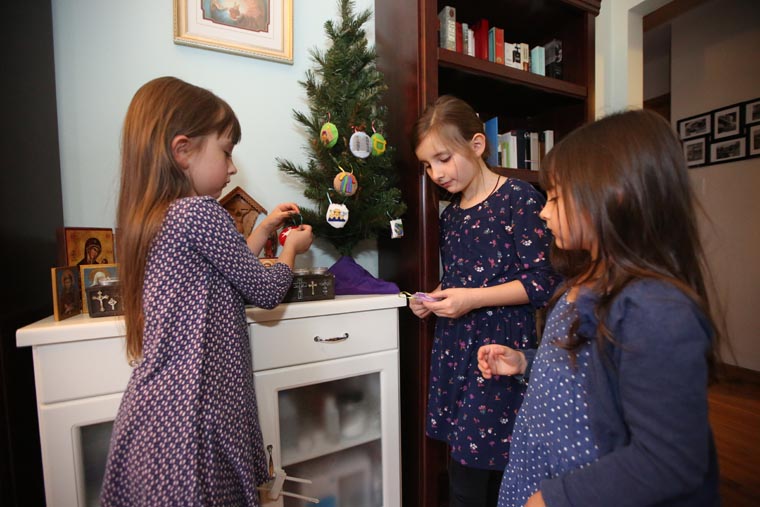 She continued the tradition while in college at the Franciscan University of Steubenville, Ohio, where she met her husband, Mark.

“After seeing (Advent traditions) in my childhood, I thought, I want to do this the whole year, not just for the short four weeks before Christmas,” said Spencer, 31.

Even before they were married, Susanna and Mark both felt “drawn to liturgical life” and began incorporating more aspects of the Catholic Church’s calendar into their daily lives, from praying the Liturgy of the Hours to observing saints’ feast days. Now parents of four, ages 2 to 8, and parishioners of St. Agnes in St. Paul, the Spencers are intentional about shaping their home with the rhythm of the church seasons.

“A lot of the things that we’ve done are taking the Advent wreath idea and conforming it to the other liturgical seasons,” Susanna said.

The first Sunday in Advent marks the beginning of a new church year, and for some Catholic families, the liturgical “New Year” is tied to special traditions at home. This year the first Sunday is Dec. 3.

While enhancing a family’s “domestic church” through aspects of the liturgical calendar is nothing new, Catholics who are interested in liturgical home practices can find an increasing wealth of information online, where Catholics share ideas on blogs dedicated to the practice, such as Carrots for Michaelmas, www.carrotsformichaelmas.com, and Catholic All Year, www.catholicallyear.com.

Spencer noted that Sts. Louis and Zelie Martin, the parents of St. Therese of Lisieux, used a set of 15 books dedicated to the annual cycle of feasts and fasts in their 19th-century French home; Spencer has an edition on a shelf in her own living room.

In the Spencer’s West St. Paul home, the church’s season is regularly reflected in two spots: the dining room table centerpiece and the family’s small prayer table. The latter contains candles and a few icons, statues and artworks of saints and devotions, some of which change to reflect certain feasts or seasons.

The family prays there together daily, often noting that day’s saint or memorial. Sometimes, they mark a saint’s feast by attending daily Mass, where the saint is commemorated in the liturgy.

The Spencers’ centerpieces range from an Advent wreath, to a crown of thorns during Lent, to fresh flowers during ordinary time. Susanna anticipates feast days while meal planning, serving spaghetti on an Italian saint’s memorial or a blueberry dessert on days honoring Mary, which the church traditionally symbolizes with blue.

“One of the ways that you can learn about holiness is living with the saints,” she told The Catholic Spirit, newspaper of the Archdiocese of St. Paul and Minneapolis. “If we never think of them, we … can’t benefit from their intercession.”
She realizes that observing the Catholic Church’s calendar can feel like another task on the to-do list, and therefore potentially overwhelming or discouraging. She encourages Catholics who want to try it to keep it simple.

That’s also the advice shared by Beth Morgan, who was inspired to incorporate the church year into her home after becoming a mother. Now with two girls under age 4 and a baby due in January, she said the practice helps her teach her children the faith.

“It’s hard to engage (children) in Mass if you don’t make it tangible, and I think having (aspects of the liturgical year) at home makes it tangible,” said Morgan, 28, a parishioner of Transfiguration in Oakdale.

Like the Spencers, the Morgans try to reflect the church season with their dining table centerpiece, because it’s a daily focal point in their home. The Advent centerpiece includes a purple cloth to help her daughters connect their home to what they see at Mass, she said.

“The church has a beautiful tradition, and everything we do in our life goes to that same cadence,” she said. “We want to instill that Jesus and God are part of everything we do.”

Morgan also rotates some of her daughters’ bedtime books to correspond with Christmas, Lent and Easter; celebrates the feast days of the saints for whom her daughters were named; and changes the family’s prayer routine to reflect the season or devotional month, such as adding Hail Marys to their evening prayers in May, the month the church especially honors the mother of God.

The Morgans’ Advent will include a Jesse Tree and special daily prayers paired with their meal prayer. On Christmas Day, Morgan will swap her Advent wreath’s purple and pink candles for white, and she’ll place the Nativity scene’s Baby Jesus in the center to await the arrival of the Magi — whose figurines Morgan plans to move closer to Jesus each day until Epiphany.

Near St. Joseph in West St. Paul, Heidi Flanagan’s family has developed an Advent tradition that has connected its members more intimately to the communion of saints.

On the first Sunday of Advent, Heidi; her husband, John; and their six children — ages 2 to 12 — select a slip of paper from a shoebox. On that paper is the name of a saint who becomes their patron for the liturgical year.

Heidi, 43, received the box — and the idea — about eight years ago from a friend who does something similar in her home. St. Joseph parishioners, the Flanagans say a small litany of the saints daily, asking each member’s patron saint for that year to pray for them. They also celebrate their feast days throughout the year.

“I feel like it’s given them this buddy in heaven — this sense of security — that we’re not alone, that they have these superheroes rooting for them and praying for them in heaven,” Flanagan said of her children. “They develop friendships with these saints.”

The tradition has provided an opportunity to learn more about the saints’ lives, and the saints have helped all of the Flanagans grow in their spiritual lives. Before they select their saints, the Flanagans also pray that the saints selected would also “choose” them.

“It’ s been so cool how often we look back at the year and say, ‘Oh, I can totally see how this saint chose me,’” because different challenges or opportunities seemed suited to that saint’s intercession.